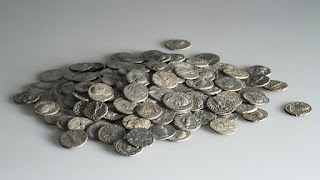 A Roman treasure of 293 silver coins has been discovered in a forest near Pratteln in northwestern Switzerland. The find is one of the largest Roman silver hoards in Switzerland. The coins are exclusively denarii, which according to information from Archaologie Baselland are in very good overall condition. A volunteer from Archaologie Baselland found the hoard in the summer of 2019 on the slope of the Adlerberge near Pratteln Baselland.

The oldest coin was struck under Emperor Nero, who reigned between AD 54 and 68. Most of the coins date from the second century, the most recent from the time of Emperor Commodus - they were struck in Rome in AD 181/182.

According to the communique, the find is second largest assemblage Roman silver coin hoards in Switzerland, after the treasure of Augusta Raurica (Kaiseraugst) discovered in the immediate vicinity.