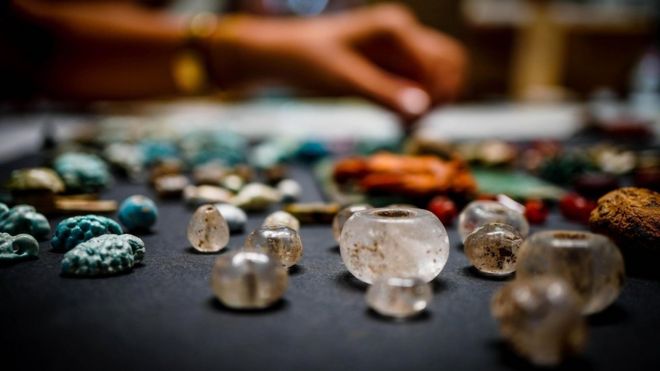 Archaeologists working in the buried Roman city of Pompeii say they have uncovered a "sorcerer's treasure trove" of artefacts, including good-luck charms, mirrors and glass beads.

Most of the items would have belonged to women, said Massimo Osanna, director of the Archaeological Park of Pompeii.

A room with the bodies of 10 victims, including women and children, was excavated in the same house.

Pompeii was engulfed by a volcanic eruption from Mt Vesuvius in AD 79.

The fatal eruption froze the city and its residents in time, making it a rich source for archaeologists.

Read the rest of this article...
Posted by David Beard MA, FSA, FSA Scot at 3:15 PM No comments: 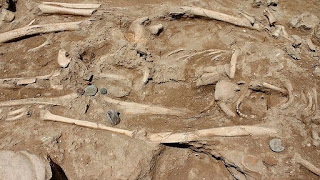 Just outside the present-day town centre of Ugento in the province of Lecce, Apulia (southern Italy), during the course of excavations arranged by the Superintendence of Archaeology, Fine Arts and Landscape for the provinces of Brindisi, Lecce and Taranto on private property, evidence has come to light that brings new data for the reconstruction of the history of Ugento: in addition to some wall structures probably dating back to the Middle Ages, a burial of great interest for the study of funerary rituals has emerged.

"It was a plain pit in which three individuals had been deposited at successive times", explains the Superintendence. "The grave, probably dating back to the Roman-Republican Age, has yielded 4 coins not yet legible and a grey oil lamp."

"Once the skeletons had been removed, four pits came to light inside which the remains of the earlier inhumations and some accompanying objects had been deposited: in particular, a bowl and an undecorated miniature vase, perhaps belonging to the third century BC, as well as an oinochoe (a container for mixing wine) dating back to the Hellenistic period, had been carefully buried inside one of the pits."

A PLETHORA of important archaeological discoveries including a Roman bath house have been made during an excavation.
Several historic artefacts, including the remains of what would have been a large Roman bath house, have been unearthed on St Nicholas Road under the former hardware shop, Jack’s.
The ancient spa-esque facility, used for public bathing, was identifiable by the discovery of essential components, such as the hollow and ceramic flues which would have lined both the walls and floors of the house’s different rooms.
Evidence further confirming the famous Boudican revolt, which caused the destruction of modern Colchester in AD 61, was also discovered.
Read the rest of this article...
Posted by David Beard MA, FSA, FSA Scot at 5:47 PM No comments:

The witty message on the stylus has been deciphered by a classicist and epigrapher. Courtesy MOLA

Whether as giver or receiver, most people have experienced the deliberately naff holiday present. But few know how this droll practice has a long tradition that stretches back – way beyond the rise of the English seaside town – deep into antiquity.

At the Museum of London, excavations led by MOLA for financial technology and information company Bloomberg’s European headquarters in London, on the bank of the river Walbrook – a now lost tributary of the Thames, have found a roguish example of the token of friendship.

An iron stylus, used to write on wax-filled wooden writing tablets and dating to around AD 70, just a few decades after Roman London was founded, has been found with an inscription, which has been painstakingly examined and translated by classicist and epigrapher Dr Roger Tomlin, reads:

Read the rest of this article...
Posted by David Beard MA, FSA, FSA Scot at 6:32 PM No comments: 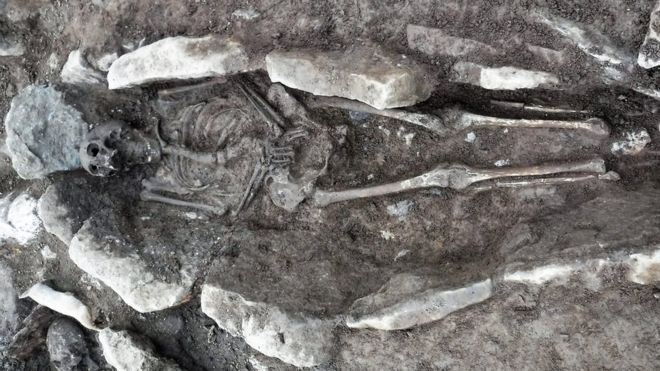 Tests showed some of the people buried up to 1,600 years ago were from Scandinavia and the Mediterranean  Image copyright ARCHAEOLOGY WALES

Some of the skeletons found in an ancient graveyard on Anglesey date back to the 4th Century, experts have said.

Wales Archaeology, which led the college dig, found the remains of 34 individuals. Some had been buried in stone-lined coffins.

Tests showed some of the people buried up to 1,600 years ago were from Scandinavia and the Mediterranean.

Other remains were from the Welsh borders and four were Brits, said project manager Dr Irene Garcia Rovira.

The findings have been made public following digs carried out during work on the Llangefni link road in 2016 and Coleg Menai's nearby campus the year after.

Read the rest of this article...
Posted by David Beard MA, FSA, FSA Scot at 7:37 PM No comments:

Roman era human remains have been found underneath an Anglesey college.

Skeletons buried in dozens of stone-lined 'cist' graves were discovered as part of an archaeological dig under Coleg Menai’s Pencraig Campus in Llangefni 2017.

Two years on, Dr Irene Garcia Rovira of Archaeology Wales has now revealed all about the "astonishing finds" as part of the major excavation.

So far, the remains of 86 people have been discovered at the ancient burial ground, which experts say have remained in "astonishingly good" condition.

They are thought to date back more than 1,600 years.

The archaeologist also says tests reveal how some of the skeletons buried in the cemetery are likely to have grown up hundreds of miles away from Anglesey.


Experts believe the site was used as a cemetery from around the time of the Roman departure from Wales.

Read the rest of this article...
Posted by David Beard MA, FSA, FSA Scot at 7:34 PM No comments: