The head of Dionysus was found near the Roman Forum. Photos:
Archeological Park of the Colosseum.

Archeologists in Rome have uncovered a large marble head from Rome’s imperial age that is believed to show Dionysus, also known as Bacchus, the Greek god of wine, music and dance.

The white marble bust, believed to be 2,000 years old, was discoved in the heart of the city, near the Roman Forum, during excavations last week.

The head had been reused to form part of a medieval wall but experts say it is in excellent condition.

The head, with hollow eyes probably once filled with glass or precious stones, would have belonged to a large statue of the god created in the imperial age.

Read the rest of this article...
Posted by David Beard MA, FSA, FSA Scot at 5:45 PM No comments:

Remains of entire Roman town discovered next to motorway in Kent 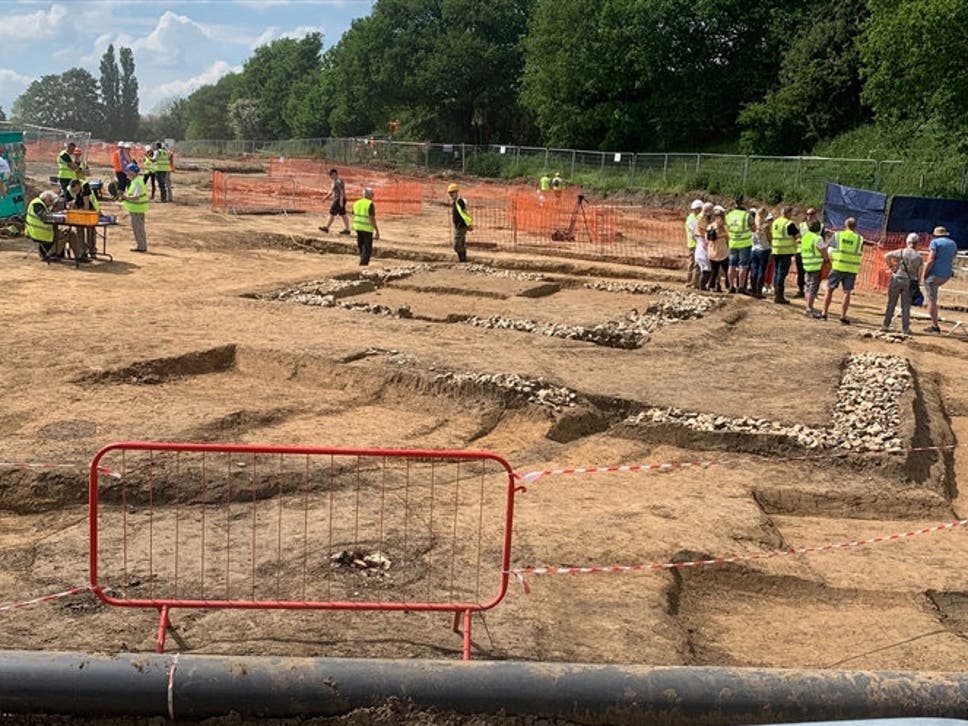 Workers at the Roman settlement discovered in Newington ( KMG/SWNS.com )

An 18-acre settlement containing rare coins, pottery and jewellery dating back as early as 43 AD has been uncovered next to a major motorway in Newington.

Evidence of a 7m-wide road was also found, alongside the remains of an ancient temple, close to the A2 – which itself tracks an ancient link with Canterbury and the coast.

Experts have said the discovery is one of the most significant finds made in the region.

Dean Coles, chairman of the Newington History Group, said: “This is very exciting. The scale of this site, with the huge number and quality of finds, changes our knowledge of Newington’s development.”

Read the rest of this article...
Posted by David Beard MA, FSA, FSA Scot at 3:42 PM No comments:

An 18-acre settlement dating back as early as 43 AD has been uncovered
(Image: KMG / SWNS.com)

An entire Ancient Roman town including a temple and main road has been uncovered buried next to a major motorway .

This discovery has been hailed one of the most significant finds in regional archaeological history.

The 18-acre settlement, which contains rare coins, pottery and jewellery, dates back as early as 43 AD.

It has been uncovered next to the A2 in Newington, Kent.

The site includes remains of a temple which has since been named Watling Temple - making it one of only 150 sites recorded in England.

Read the rest of this article...
Posted by David Beard MA, FSA, FSA Scot at 3:22 PM No comments:

Archaeologists find remains of the Roman invasion of Ayrshire

The remains were uncovered during building work

ARCHAEOLOGISTS have uncovered fresh evidence of a Roman invasion of Scotland under an Ayrshire playing field.

A marching camp used by the Legions as they made their way along the coast was found by a team carrying out work prior to the building of the new Ayr Academy.

It is thought to date back to the first century AD, when an army under Agricola, the Roman Governor of Britain, fought its way up to Aberdeenshire and defeated an army of Caledonians at the battle of Mons Grampius.

Read the rest of this article...
Posted by David Beard MA, FSA, FSA Scot at 9:53 AM No comments:

The Roman coin hoard and fragment of pot that it was buried in, near Rauceby.

The largest haul of Roman coins from the early 4th Century AD ever found in Britain has been unearthed near Sleaford by two metal detector enthusiasts.

The discovery was made near the village of Rauceby after the detectorists painstakingly searched the area for years.

The hoard, which consists of more than three thousand copper alloy coins, many of which are historically unique, is now being looked at by The British Museum and is regarded as being of significant international importance.

The coins have today (Thursday) officially been declared treasure under the Treasure Act 1996 at Lincoln Coroner's Court.

Read the rest of this article...
Posted by David Beard MA, FSA, FSA Scot at 11:22 AM No comments:

Fancy a game of Ludus latrunculorum? It seems the Romans certainly did

Artists impression of how the Vindolanda archaeology centre would look
(Image: Newcastle Chronicle)

After a day’s duty on the frontier of Hadrian’s Wall , what better than a relaxing game of Ludus latrunculorum.

The game of strategy and military tactics was popular across the Roman empire, and a stone board on which it may have been played has been uncovered at Vindolanda fort in Northumberland .

This third century board was found by volunteer digger Phil Harding re-used in a floor, in a newly excavated building behind the Vindolanda bath house.

It is thought that the board would have been in use in the bath house and then utilised elsewhere after it was broken.

Read the rest of this article...
Posted by David Beard MA, FSA, FSA Scot at 11:20 AM No comments: The deepest layers of carbon-14 dated ice found in the Col du Dôme of the Mont Blanc glacier in the French Alps provide a record of atmospheric conditions in the ancient Roman era. Published in Geophysical Research Letters, the study, led by an international team and coordinated by a CNRS scientist at the Institute for Geosciences and Environmental Research (IGE)(CNRS/IRD/UGA/Grenoble INP)*, reveals significant atmospheric pollution from heavy metals: the presence of lead and antimony (detected in ancient alpine ice for the first time here) is linked to mining activity and lead and silver production by the ancient Romans, well before the industrial age, in fact.

Read the rest of this article...
Posted by David Beard MA, FSA, FSA Scot at 11:17 AM No comments: 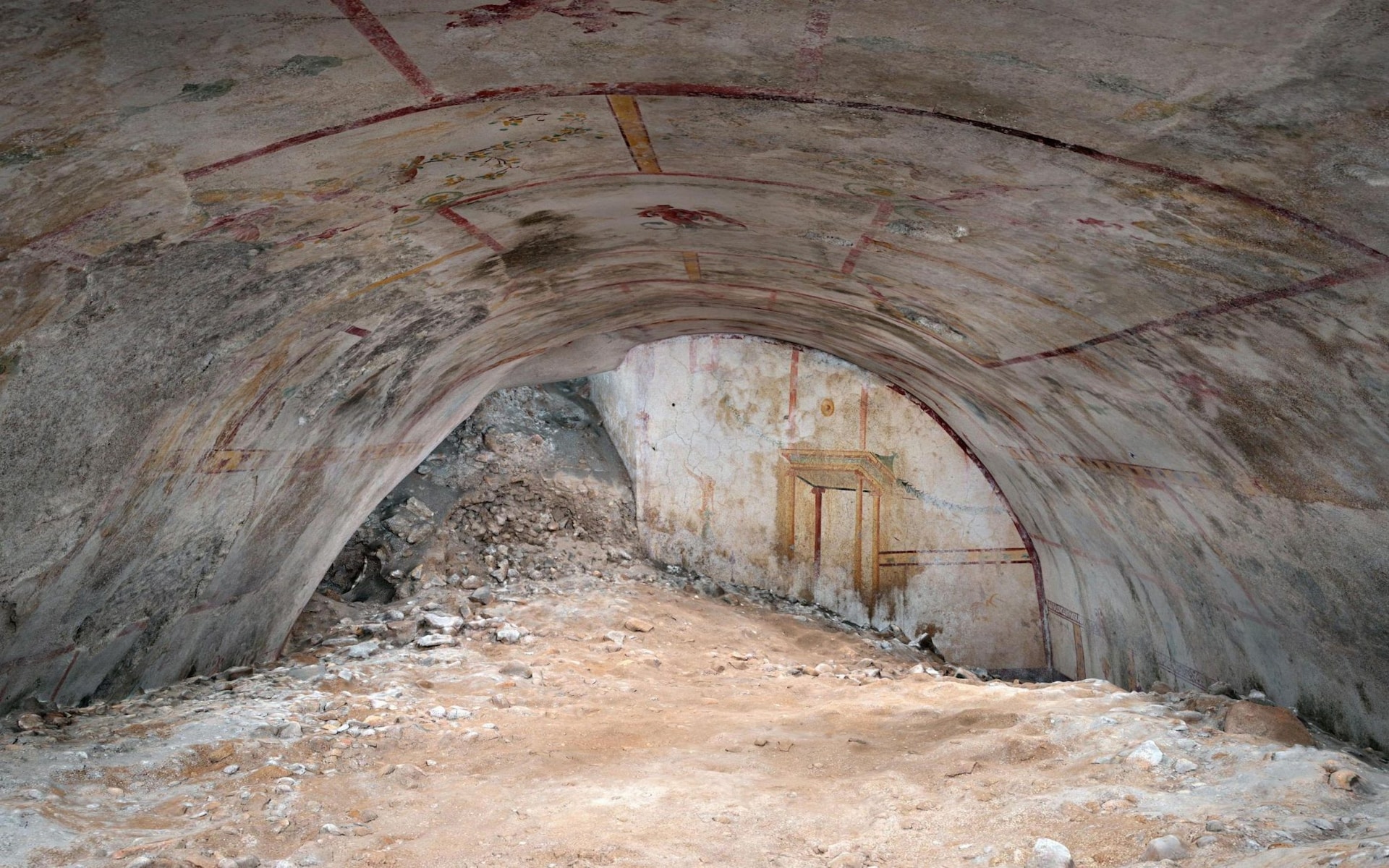 Archeologists have chanced upon an underground chamber decorated with images of panthers, centaurs and a sphinx in the remains of a vast palace built by the Emperor Nero in Rome.

The room, which was part of the huge Domus Aurea palace built by the emperor in the first century AD, had remained hidden for nearly 2,000 years.

It was discovered by accident during restoration of an adjacent area of the palatial complex, which was built on by subsequent emperors, including Trajan, and now lies interred beneath a hill next to the Colosseum in the historic heart of Rome.

Read the rest of this article...
Posted by David Beard MA, FSA, FSA Scot at 11:14 AM No comments: