A child's coffin believed to date back to the 3rd Century AD has been found beneath a Leicestershire field by metal detectorists.
The Digging Up The Past club found the lead coffin and Roman coins at a farm in the west of the county.Club spokesman David Hutchings said: "I knew it was something a bit special as soon as I saw it."

Read the rest of this article...
Posted by David Beard MA, FSA, FSA Scot at 6:41 PM No comments: 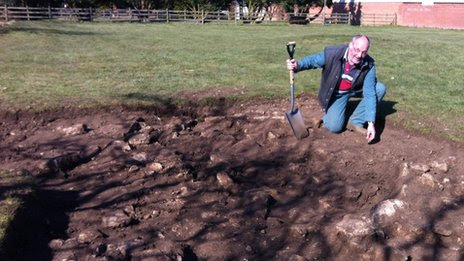 
Archaeologists believe they have found another Roman building at the site of a dig in a private garden in Lincolnshire.
The work in Navenby has already uncovered several buildings used as workshops in the 3rd Century.
Volunteers and specialists will continue to dig for another 11 days before the site is filled back in.
The project, which started in April, has also uncovered a portable altar and an offertory stone.
Read the rest of this article...
Posted by David Beard MA, FSA, FSA Scot at 5:36 PM No comments: 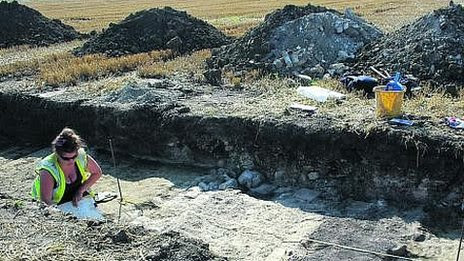 
The remains of what is believed to be a 2,000-year-old Roman villa have been discovered near Devizes in Wiltshire.
Archaeologists uncovered the remains on land near Lay Wood, between the Kennet and Avon Canal and Horton Road, as part of a survey ahead of a new housing development.
Wessex Archaeology is now examining what has been found.
Steve Melligan, from the Crown Estate, which manages the land, said it was an "exciting find".
Read the rest of this article...
Posted by David Beard MA, FSA, FSA Scot at 5:43 PM No comments:

Amateur cavers have discovered a network of tunnels underneath the Villa Adriana (Hadrian’s Villa) at Tivoli, near Rome.

Experts suggest that the subterranean world of tunnels and roads was used to house slaves, oxen, carts and food supplies. The network includes streets wide enough to allow for the passage of carts in both directions as well as narrow passageways. Hadrian’s Villa covers approximately 618 acres but the extent of the underground network is not known yet and excavations are ongoing.

The Roman Emperor Hadrian built the villa as a summer retreat between 38 AD and 118 AD. After his death in 138 AD, his successors used and enlarged the complex. A decade ago, experts realised that there were tunnels beneath the complex, and a team of Italian archaeo-speleologists led by amateur caver Marco Placidi mapped more than a mile of the vast network this year.

Read the rest of this article...
Posted by David Beard MA, FSA, FSA Scot at 6:38 PM No comments:

A Roman bathhouse still in use after 2,000 years 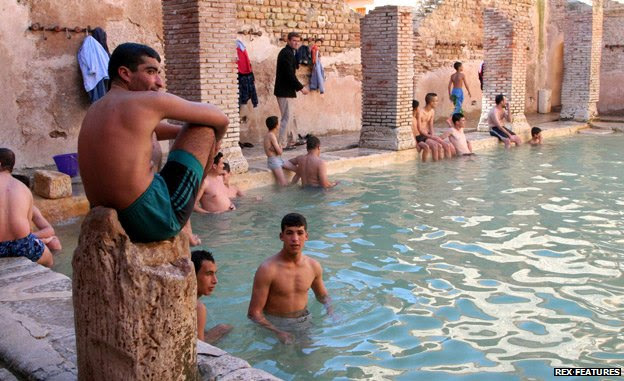 Roman ruins are rarely boisterous places, full of noise, laughter and life. But Edward Lewis stumbled across one that is - a place to have a daily wash, and to enjoy the companionship of friends, just as it was for the Romans who built it.
Observing middle-aged men swathed in white foamy soapsuds is not something I would normally write home about and it certainly wasn't why I was in north-east Algeria.
I had come to look at the Roman baths in Khenchela and had overlooked the fact that for many of the local population the attraction was not the ancient architecture or remarkable state of preservation but the fact there was a free and plentiful supply of hot water - still feeding into two open air baths.
Read the rest of this article...
Posted by David Beard MA, FSA, FSA Scot at 8:18 PM No comments:

The barracks occupied by the 8th Roman legion of Augustus in the middle of the 1st century AD have been discovered by a team of researchers from the Antiquity of Southeastern Europe Research Centre, University of Warsaw, during the excavation in Novae near Svishtov, Bulgaria.
"The structure consisted of a series of segments of equal sizes. The segments consisted of one big and one small room, the dimensions of which underwent modifications in the subsequent phases of the settlement. The barrack was about 16 meters wide and 42 meters long" - explained Prof. Piotr Dyczek , head of the expedition.

The remains indicate that the support structure were large wooden poles, while smaller dowels sustained braid covered with soil. In the last phase, the exterior walls were covered with white plaster. The system of small dowels inside large rooms suggests, according to the researchers, that there could be bunk beds in the corners. There were wooden shelves in the vestibules.

Read the rest of this article...
Posted by David Beard MA, FSA, FSA Scot at 3:14 PM No comments: 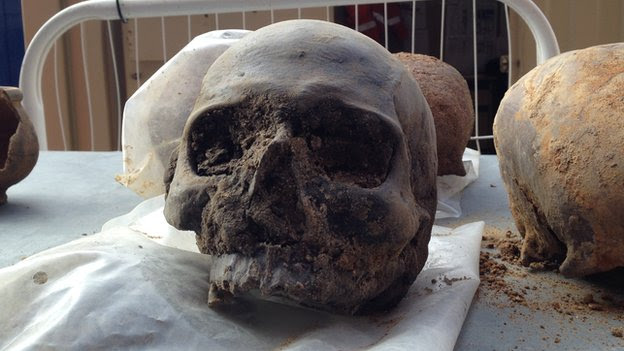 
Archaeologists working with London's Crossrail project have uncovered 20 skulls believed to be from the Roman period.
It is likely the bones were washed from a nearby burial site along one of London's "lost" rivers - the Walbrook.
Since the Crossrail project began, about 10,000 Roman items have been discovered.
These latest finds could give new insights into the lives of Roman people.
Near-intact pottery artefacts were also found which likely travelled along the same route as the skulls. Other bone fragments would not have been washed as easily down the river.
Read the rest of this article...
Posted by David Beard MA, FSA, FSA Scot at 8:44 AM No comments: