Ireland in a Roman World

Further details and poster...
Posted by David Beard MA, FSA, FSA Scot at 10:32 AM No comments:

Archaeologists are searching the grounds of a police headquarters for historic evidence of the Battle of Bannockburn and a Roman road.

Experts believe they are located at Central Scotland Police headquarters in Randolphfield, Stirling. Archaeologists from Stirling Council believe the land is of historical importance.

A geophysical survey is being carried out over an area surrounding two standing stones in front of the building. The stones are said to commemorate or may have been used in a skirmish during the Battle of Bannockburn in 1314.

Thomas Randolph, the Earl of Moray, led 500 Scottish horsemen into battle against a troop of English cavalry, under the command of Sir Robert Clifford. The skirmish was won by Randolph and the area, Randolphfield, was named after him.

Read the rest of this article...
Posted by David Beard MA, FSA, FSA Scot at 11:39 AM No comments:

Bone-bothering boffins have uncovered a massive Roman mosaic in southern Turkey, proving that the ancient Empire's influence reached far into the area.

The humungous mosaic, uncovered by a farmer in his field next to a still-standing bathing structure, is 1,600 square feet of meticulously crafted workmanship. It was built at the height of the Roman Empire's power in the third and fourth centuries AD.

"This region is not well understood in terms of history and archaeology," says University of Nebraska-Lincoln prof Michael Hoff.

"It's not a place in which archaeologists have spent a lot of time, so everything we find adds more evidence to our understanding of this area of the Roman Empire.

Crosby Garrett Helmet to be part of Royal Academy exhibition

A Roman cavalry helmet bought for £2.2m at auction after it was discovered in a Cumbrian field is to go on public display for the first time.

The Crosby Garrett Helmet, named after the village near where it was found, is to feature as part of a Royal Academy show called Bronze.

A private collector outbid a Carlisle museum at the auction in 2010.

Bronze co-curator David Ekserdjian said the helmet, which is almost 2,000 years old, was a "masterpiece".

He said: "Even if this helmet had been known about for as long as anybody can remember, we'd still want it in the show because it's a fantastic work of art.

Read the rest of this article...
Posted by David Beard MA, FSA, FSA Scot at 12:06 PM No comments:

Ale, Caesar! Romans and Caledonian tribes went to pub together

ARCHAEOLOGISTS surveying the world’s most northerly Roman fort have found an ancient pub.

The discovery, outside the walls of the fort at Stracathro, near Brechin, Angus, could challenge the long-held assumption that Caledonian tribes would never have rubbed shoulders with the Roman invaders.

Indeed, it lends support to the existence of a more complicated and convivial relationship than previously envisaged, akin to that enjoyed with his patrician masters by the wine-swilling slave Lurcio, played by comedy ­legend Frankie Howerd, in the classic late 1970s television show Up Pompeii!.

Stracathro Fort was at the end of the Gask Ridge, a line of forts and watchtowers stretching from Doune, near Stirling.

The system is thought to be the earliest Roman land frontier, built around AD70 – 50 years before Hadrian’s Wall.

Read the rest of this article...
Posted by David Beard MA, FSA, FSA Scot at 11:44 AM No comments:

How Romans made marble statues 'real'

The Romans have a reputation for being brilliant engineers and soldiers, but what isn't as well known is that they also gave us wonderful artistic treasures.

The latest scientific techniques suggest that marble statues in the ancient world were not as monochromatic as we may imagine.

Alastair Sooke looks at the Treu Head in the British Museum, an important and rare marble head from the mid-second century AD, which would have been painted to make her look "like a real person". 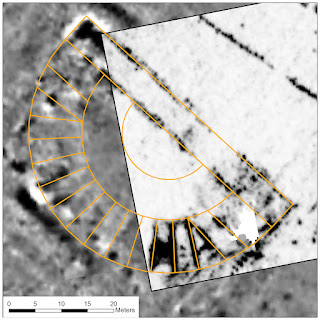 An image of the theatre at Interamna Lirenas, in Southern Lazio, which emerged from the latest study. The grey background shows the magnetrometry image which revealed that a large building was on that spot. The white square is taken from a Ground Penetrating Radar survey (GPR) which showed the shape and dimensions of the building in more detail. This revealed it to be a Roman theatre, marked in yellow [Credit: University of Cambridge]


An ancient Italian town, which disappeared after its abandonment 1,500 years ago and now lies buried underground, has been mapped by researchers, revealing the location of its theatre, marketplace and other buildings.

Originally founded as a Roman colony in the 4th century BCE, the site of Interamna Lirenas lies in the Liri Valley in Southern Lazio, about 50 miles south of Rome itself. After it was abandoned around the year 500 CE, it was scavenged for building materials and, over time, its remains were completely lost from view. Today, the site is an uninterrupted stretch of farmland, with no recognisable archaeological features.