The ancient city of Hierapolis, located in modern-day Turkey

Is it possible to walk through the gates of hell and live? The Romans thought so, and they staged elaborate sacrifices at what they believed were entrances to the underworld scattered across the ancient Mediterranean. The sacrifices—healthy bulls led down to the gates of hell—died quickly without human intervention, but the castrated priests who accompanied them returned unharmed. Now, a new study of one ancient site suggests that these “miracles” may have a simple geological explanation.

Rediscovered just 7 years ago, the gate to hell at the ancient city of Hierapolis, in modern-day Turkey, is a stone doorway leading to a small cavelike grotto. The gate was built into one wall of a rectangular, open-aired arena, topped by a temple and surrounded by raised stone seating for visitors. The city itself sits in one of the region’s most geologically active areas; 2200 years ago, its thermal springs were believed to have great healing powers. But a deep fissure running beneath Hierapolis constantly emits volcanic carbon dioxide (CO2), which pours forth as a visible mist. The gate—also known as the Plutonium, for Pluto, the god of the underworld—is built directly above it. In 2011, archaeologists showed that the gate is still deadly: Birds that fly too close suffocate and die.

Read the rest of this article...
Posted by David Beard MA, FSA, FSA Scot at 6:51 PM No comments:

The Archaeology of Wealth Inequality

Researchers trace the income gap back more than 11,000 years

When the last of the volcanic ash from Mount Vesuvius settled over Pompeii in A.D. 79, it preserved a detailed portrait of life in the grand Roman city, from bristling military outposts to ingenious aqueducts. Now researchers say the eruption nearly 2,000 years ago also captured clues to one of today’s most pressing social problems.

Analyzing dwellings in Pompeii and 62 other archaeological sites dating back 11,200 years, a team of experts has ranked the distribution of wealth in those communities. Bottom line: economic disparities increased over the centuries and technology played a role. The findings add to our knowledge of history’s haves and have-nots, an urgent concern as the gulf between the 1 percent of ultra-rich and the rest of us continues to grow.
“We wanted to be able to look at the ancient world as a whole and draw connections to today,” says Michael E. Smith, an archaeologist at Arizona State University, who took part in the study. The research is being published this month in Ten Thousand Years of Inequality, a book edited by Smith and Timothy Kohler of Washington State University.
Read the rest of this article...
Posted by David Beard MA, FSA, FSA Scot at 6:44 PM No comments: 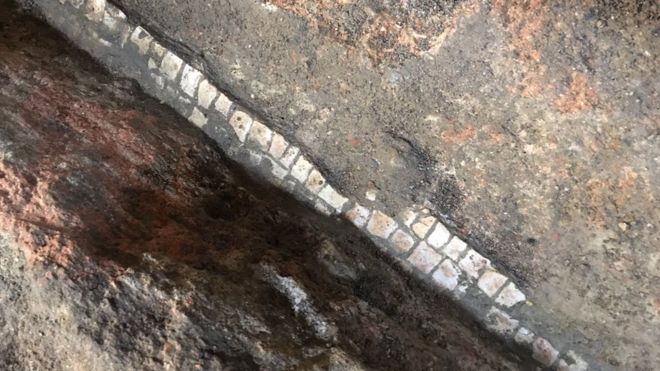 Dr Sarah Morton said the find will "continue to develop our understanding of the Roman Baths"
Archaeologists have made "a very exciting discovery" during excavations at an historic Roman baths site.

The oldest mosaic ever found at the site in Bath has been discovered by local volunteer Fiona Medland.

Historic England are in discussion with the team on the best way to uncover it.

Stephen Clews, manager of the Roman Baths, said: "So far, just a few of the small cubes of stone that make up the floor have been uncovered. They are a creamy buff colour and are made from local stone. They are small in size, about one centimetre square, and carefully laid.

Read the rest of this article...
Posted by David Beard MA, FSA, FSA Scot at 6:24 PM No comments: 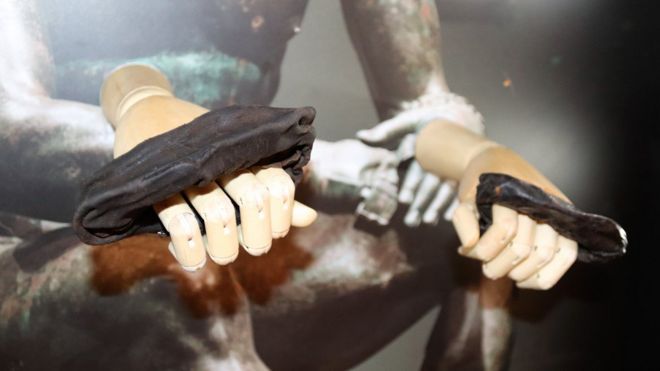 The gloves were "skilfully made" about 2,000 years ago

Roman boxing gloves unearthed during an excavation near Hadrian's Wall have gone on public display.

Experts at Vindolanda, near Hexham, in Northumberland, believe they are "probably the only known surviving examples from the Roman period".

The gloves were discovered last summer along with a hoard of writing tablets, swords, shoes and bath clogs.

Made of leather, they were designed to fit snugly over the knuckles and have the appearance of a protective guard.

Read the rest of this article...
Posted by David Beard MA, FSA, FSA Scot at 6:22 PM No comments: 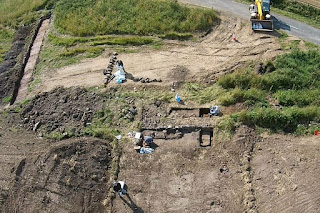 A drone shot looks down at the Devil's Causeway, in Northumberland
[Credit: AAG Archaeology]

The road can be traced from Portgate on Hadrian’s Wall, near the Errington Arms, to the mouth of the River Tweed, but parts of it have remained uncovered.

A long feature crossing the site north of Matfen divided the opinion of experts, with some believing it to be the remains of the Devil’s Causeway and others suggesting it was merely an old dry stone wall.

In an attempt to put the question to bed, AAG Archaeologists cut several trenches to view a cross section of the remains, and found a defining characteristic of the Roman road.

The team discovered a stone spine, seen at excavations of the Devil’s Causeway near Netherwitton in 2001 and Shellbraes in 1937.

Read the rest of this article...
Posted by David Beard MA, FSA, FSA Scot at 6:16 PM No comments: 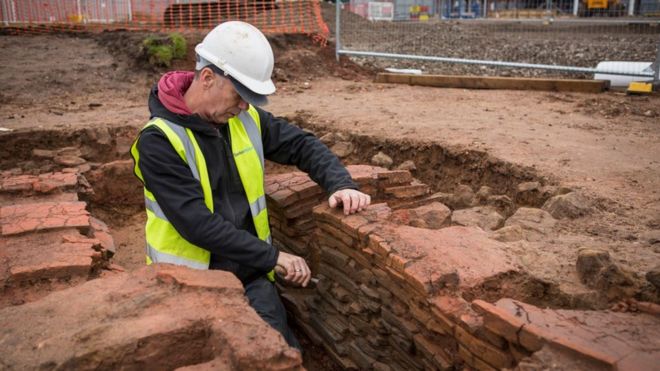 The remains of a "second century" Roman villa including a building "the size of a medieval church" have been found.

The building - in Warwick - shows agricultural use with corn drying ovens and also a "suite of domestic rooms", where the Romans would sleep and eat.

Archaeologists said the estate of which it formed part would have been the largest in the region of its time and spread along the Avon's banks.

The county council said the find would be "preserved" under a new school.

Read the rest of this article...
Posted by David Beard MA, FSA, FSA Scot at 5:01 PM No comments:

The previously unknown Roman villa which has been unearthed in Warwick.

THE remains of a previously unknown Roman building – the largest ever seen in the region – have been discovered during building work on a new school.

Wall foundations for a large aisled structure the size of a medieval church have been unearthed on Banbury Road in Warwick, to where King’s High School is relocating.

Archaeologists say the building most likely forms a component of a large villa estate, which must have spread along the banks of the Avon and been connected to the Roman road system, and early indications suggest it developed in the 2nd century AD and probably went out of use in the 4th century.

Constructed of local sandstone, over 28m long by 14.5m wide, the villa would have been the largest building ever seen in the region.

Corn drying ovens, both inside and outside the structure, attest to an agricultural function, although internal wall divisions at the opposite end of the building probably indicate a suite of domestic rooms.

Read the rest of this article...
Posted by David Beard MA, FSA, FSA Scot at 4:58 PM No comments:

Part of a U-shape fortress tower from the Late Antiquity fortress wall of ancient Odessos (Odessus) has been discovered in the cellar of a house in Bulgaria’s Black Sea city of Varna.
Photo: Varna Museum of Archaeology

A Late Antiquity fortress wall tower from the Ancient Thracian, Greek, and Roman city of Odessos (Odessus) has been discovered by accident in the Black Sea city of Varna, with rescue archaeological excavations affirming data about the existence of Quaestura Exercitus, a peculiar administrative district in 6th century AD Byzantium (i.e. the Eastern Roman Empire), under Emperor Justinian I the Great, uniting much of today’s Northern Bulgaria with Cyprus, parts of Anatolia, and the Cyclades.

Parts of a U-shaped fortress tower have been discovered by accident in the cellar of a house at 13 Voden Street in Bulgaria’s Black Sea city of Varna, within the Odessos Archaeological Preserve.

Ensuing rescue excavations have explored the ruins of the tower, which has been found to be part of one of the known fortress walls of ancient Odessos, the Varna Museum of Archaeology has announced, as cited by local news site Varna24.

Read the rest of this article...
Posted by David Beard MA, FSA, FSA Scot at 11:37 AM No comments:

Archaeologists Have Revealed That Game Dice Used to Be Totally Unfair

The game dice we use today are as fair as we can design them - but that wasn't always the case. And now researchers have analysed the history of dice to work out when things changed, and why people didn't care about these probabilities until a certain turning point in civilisation.
Researchers from UC Davis and the American Museum of Natural History have examined 110 cube-shaped dice dating back to the Roman era and found that their design didn't become "fair" until the Renaissance, when scientific thinking started to come to the fore.
Read the rest of this article...
Posted by David Beard MA, FSA, FSA Scot at 11:23 AM No comments: 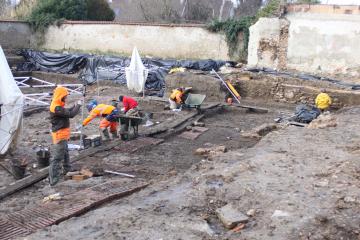 Read the rest of this article...
Posted by David Beard MA, FSA, FSA Scot at 11:19 AM No comments: