An important archeological find of ancient Roman ruins has been made at the Medici Fortress of Arezzo in central Italy. During work for the reorganization of the historic building, evidence of an ancient Roman structure dating from the early decades of the first century AD were brought to light - probably a residence, or domus.The new findings were presented by the regional superintendent of archaeological heritage, Andrea Pessina, who announced the continuation of work thanks to an immediate loan of 10,000 euros to identify more precisely what is there, as the structure could turn out to be an ancient public building of a much larger dimension. The Roman find is of enormous value for understanding the history of the city, Pessina said, and complements other discoveries such as the Church of San Donato in Cremona, dating back to the year 1000, found a few metres from the Roman structure, now being restored with financing in part from Prada proprietor Patrizio Bertelli.The ancient ruins are believed to be a residential building from the Roman period in which three rooms so far have been identified. Remains of painted wall and floors have been found in two partially investigate rooms. The building, located in the northeastern plateau of the San Donato hill, was perched above the hillside's the steep slopes overlooking the valley below.

Read the rest of this article...
Posted by David Beard MA, FSA, FSA Scot at 11:23 AM No comments:

The gladiator school was on a scale to rival Rome's famous ludus magnus, archaeologists say


Archaeologists have made a virtual reconstruction of a Roman gladiator school discovered on the banks of the River Danube in Austria.
The so-called ludus was on a scale to rival the famous ludus magnus, the gladiatorial school behind the Colosseum in Rome.
The remains at Carnuntum were mapped using sophisticated aerial surveys and ground-penetrating radar.
The archaeologists published their findings in the journal Antiquity.
Carnuntum was the capital of Upper Pannonia in Roman times and a major trading centre for amber.
Read the rest of this article...
Posted by David Beard MA, FSA, FSA Scot at 7:06 AM No comments:


The largest, best-preserved ancient Roman funerary complex found in Italy since the 19th century has been discovered at an archeological dig 70 km northeast of Venice, researchers announced Friday. 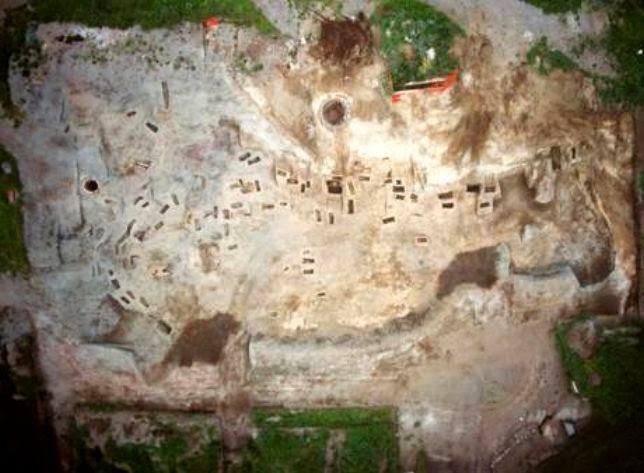 An imposing monument from the third century AD was located outside the ancient walls of what was once the Roman colony of Iulia Concordia, now in the town of Concordia Sagittaria.

The site was likened to a "little, flood-plain Pompeii" in a guided tour at the restoration site in Gruaro, Veneto. Just as Pompeii was buried by the volcanic eruption of Mount Vesuvius in 79 AD, a natural disaster wiped out and preserved sarcophagi in Iulia Concordia.

Read the rest of this article...
Posted by David Beard MA, FSA, FSA Scot at 1:39 PM No comments:


A decapitated body has been pulled out of the ground at a small housing development in Wanborough. 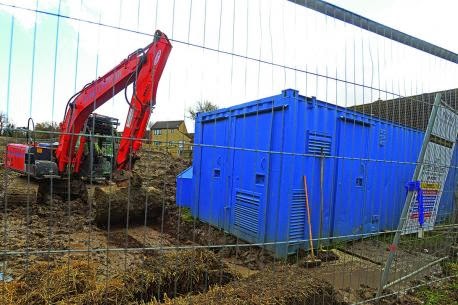 The building site at Stanley Close, Wanborough, where the skeleton was found [Credit: Swindon Advertiser]

The skeleton, which was buried in a shallow grave, is thought to date back around 1,700 years, at a time when a Roman farming settlement occupied the area.

Archaeologists believe the person would likely have been a criminal, executed and dumped just outside of the town.

Read the rest of this article...
Posted by David Beard MA, FSA, FSA Scot at 4:09 PM No comments:

Were the ancient Greeks and Romans colour blind?

Homer left historians with the impression that the ancient Greeks and Romans had an underdeveloped appreciation of colour. The ancients, in fact, were a shade more sophisticated than that and understood colour in a completely different way to us, argues Mark Bradley.


People in ancient cultures saw colour in an altogether different way from you and me. The most famously perplexing description of colour in the ancient Mediterranean world is the 'wine-dark sea' in The Iliad and The Odyssey. Have you ever looked at the sea and thought that it was the colour of claret?


One of the first people to argue that the ancient Greeks had an under-developed colour sense was a 19th century British prime minister. As well as being a politician, William Gladstone was a classics scholar and in his spare time did a study of colour usage in early Greek literature.
Read the rest of this article...
Posted by David Beard MA, FSA, FSA Scot at 12:20 PM No comments:


A hobby archaeologist with a metal detector has discovered a trove of gold and silver in a German forest dating back to late Roman times, fuelling speculation it could be the legendary Nibelung treasure that inspired Richard Wagner's opera cycle. 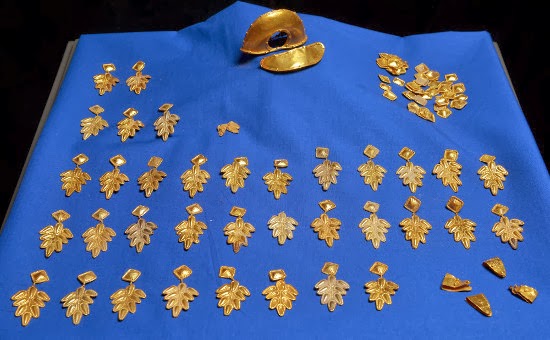 The collected gold jewellery pieces on display on Tuesday as part of the cache of barbarian treasures unearthed in Rhineland-Palatinate [Credit: DPA]

The haul from the western state of Rhineland Palatinate, worth about 1 million euros, includes silver bowls, brooches and other jewelry from ceremonial robes and small statues that adorned a grand chair, said archaeologists.

Read the rest of this article...
Posted by David Beard MA, FSA, FSA Scot at 12:12 PM No comments:


The ancient city of Tralleis in Aydın is being restored after suffering damage through ages of heavy seismic activity. When the work is complete, the ancient city will host large more tourists

Robbed of its place in the annals of history by a series of earthquakes, the ancient city of Tralleis is set to regain some of its former glory with a number of restorations that are expected to bring in tourists.“A structure which formed the entrance gate of the gymnasium building, and which became the symbol of Aydın, suffered the heaviest damage due to earthquakes,” said Aydın Culture and Tourism Director Nuri Aktakka. “As part of a project, it will be strengthened and illuminated so that it will even be seen from the entrance of the city. Also, restorations have been continuing to revive a columned road that was discovered in Tralleis. The ancient city will become a place worth a visit within a year.”

Read the rest of this article...
Posted by David Beard MA, FSA, FSA Scot at 12:09 PM No comments:

A trove of skulls and other body parts unearthed in the heart of London may have once belonged to Roman gladiators, war captives or criminals, a new study suggests.
The remains, described in the January issue of the Journal of Archaeological Science, belonged to about 40 men, mostly ages 25 to 35, and were marred by violence: cheek fractures, blunt-force trauma to the head, decapitation and injuries from sharp weapons, said study co-author Rebecca Redfern, a curator and bioarchaeologist at the Museum of London. [In Images: Skulls of the Gladiators and War Captives]
Great Britain's ancient cities are littered with archaeological treasures, many of which are often dug up accidentally prior to construction. For instance, in 2013, the burial site of King Richard III was found under a parking lot in Leicester, England, and in April 2013, a medieval knight's tomb was uncovered under a Scottish parking lot.
Read the rest of this article...
Posted by David Beard MA, FSA, FSA Scot at 6:44 PM No comments:

An epicentre of the prehistoric iron industry, coveted by the conquering Romans for its sophisticated production techniques and believed by archaeologists to have been one of the finest sites of its kind in ancient Europe, has been discovered during a major roadbuilding project in Sussex.

Dozens of boreholes, 181 trial trenches and 24 test pits have been investigated by Oxford Archaeology along the future 5.6km link road between Bexhill-on-Sea and Hastings. The evidence ranges from the late Mesolithic and Neolithic periods to the Bronze, Iron, Saxon and Medieval ages.

Read the rest of this article...
Posted by David Beard MA, FSA, FSA Scot at 5:28 PM No comments:

The Oxford Experience Summer School offers a number of one-week courses in archaeology as part of its programme.

Participants live in Christ Church - the largest of the Oxford Colleges - and take their meals in the Great Hall, which is the hall that inspired the Hogwarts Hall in the Harry Potter films.

Courses are limited to a maximum of twelve participants and tend to fill up rather quickly, so early application is advised.

You can find a list of this year's archaeology courses here..

Now is the time to start thinking about training digs for the summer.

If you are planning to go on a training dig, take a look at our list here...

If you would like to submit details of a training dig (or any other archaeological event), please use the contact form here...


The remains of a pagan temple believed to have been devoted to the goddess Minerva have been found under the Milan Cathedral. 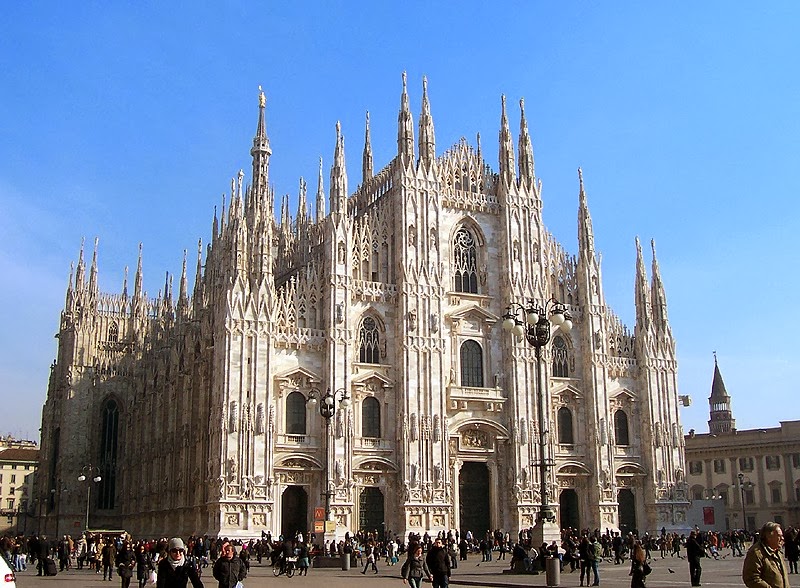 The announcement was made Wednesday during the presentation of other archaeological finds, the remains of the ancient Mediolanum Forum discovered recently under the basement of the building housing the Pinacoteca Ambrosiana and the Biblioteca Ambrosiana. Archaeological excavations to unearth the remains of the large city that, beginning in 292 A.D., was the capital of the Western Roman Empire for over a century continue despite funding difficulties. So far, part of the floor made out of what is known as 'Verona stone' has been found. The base of a section of an arcade can also be seen. The entire forum occupied an estimated surface area of 166 by 55 square meters.

Read the rest of this article...
Posted by David Beard MA, FSA, FSA Scot at 12:12 PM No comments: