Cave paintings, castles and pyramids, Neanderthals, Romans and Vikings - archaeology is about the excitement of discovery, finding out about our ancestors, exploring landscape through time, piecing together puzzles of the past from material remains.
These courses enable you to experience all this through online archaeological resources based on primary evidence from excavations and artefacts and from complex scientific processes and current thinking. Together with guided reading, discussion and activities you can experience how archaeologists work today to increase our knowledge of people and societies from the past.
The following courses are available:

Engineers carrying out sewer repairs in Bath have uncovered part of the Roman city walls.
The discovery in Burton Street was made when a large stone block was uncovered nearly 3ft (90cm) below the pavement, a Wessex Water spokesman said.
Further investigations revealed the block was part of the stone wall which dates back to the 4th Century.
"This is a very significant discovery," said Natalie Doran, an environmental scientist with Wessex Water.

The birth of Rome celebrated across the city - in pictures

Men belonging to historical groups march, dressed as ancient Romans, in front of the Colosseum to mark the anniversary of the legendary foundation of the eternal city in 753 B.C

Pompeii Falling From Grace: Pompeii’s ruins are a Unesco World Heritage site, but despite money from the European Union, the Italian government is struggling to maintain them.

POMPEII, Italy — Destroyed by the eruption of Mount Vesuvius in A.D. 79, Pompeii survived excavation starting in the 18th century and has stoically borne the wear and tear of millions of modern-day tourists.

But now, its deep-hued frescoes, brick walls and elegant tile mosaics appear to be at risk from an even greater threat: the bureaucracy of the Italian state.
In recent years, collapses at the site have alarmed conservationists, who warn that this ancient Roman city is dangerously exposed to the elements — and is poorly served by the red tape, the lack of strategic planning and the limited personnel of the site’s troubled management.

Reconstructing how the Romans made glass

Man has been making glass since the third millennium BC and during the manufacture of ancient glass, antimony, in a metal or mineral form, was added to make it colourless or opaque. 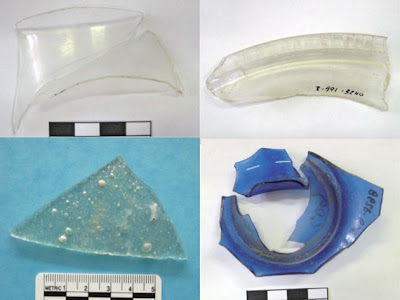 Different antimony ores have slightly different antimony isotope ratios and researchers in Belgium and the UK have developed an inductively-coupled plasma mass spectrometry (ICP-MS) method to detect and quantify these tiny differences. By analysing samples of Roman glass, the team hope to uncover clues about how the glass was made and the geographical provenance of the raw materials.Initial results suggest antimony ores from at least two locations were used to make the Roman glass being analysed.

The Italian government's anti-mafia directorate and police on Tuesday carried out raids at the world-famous archaeological site of Pompeii, which Rome and the European Union has granted 105 million euros to restore. 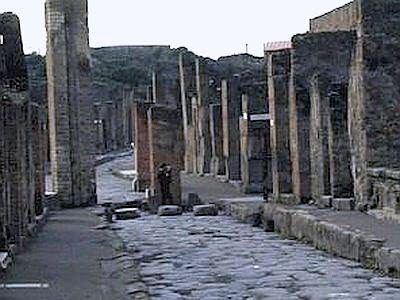 The checks were ordered by the government's top representative in nearby Naples, Francesco Musolino, to inspect progress on restoration of the House of the Guilt Cupids, the House of the Great Fountain and the Fullonica of Stephanus laundry.Italian authorities fear that the EU's pricey 'Grand Plan for Pompeii' initiative to prevent the Unesco World Heritage site from crumbling could be infilitrated by organised crime groups and subject to fraud.

'Pompeii of north' being unearthed in Londo

Archaeologists working on a site in London are calling it "the Pompeii of the north" after they have managed to find Roman artefacts dating back nearly 2,000 years.
Just yards from the River Thames, in what is now the capital's financial district, archaeologists have found coins, pottery, shoes, lucky charms and an amber gladiator amulet.
Sonja Jessup has been finding out the secret to their remarkable survival.

Amber amulet in the shape of a gladiator’s helmet. Amber was an expensive imported material and was thought to have magical powers. The Roman author Pliny describes how amber amulets could protect children from illness and the symbolism of the gladiator may also be protective
Image: MOLA
A tiny amber amulet shaped like a gladiator’s helmet has been discovered in the Walbrook area by Museum of London Archaeology (MOLA).
Measuring just over 1cm across, the object was found amongst the remains of a demolished Roman building, together with large amounts of pottery and animal bone. It is hoped that analysis of these will narrow down a possible date for the artefact.
Its distinctive visor and high crest marks it out as depicting part of the equipment of a murmillo, who wore a large enclosing helmet with a grille covering the face. Armed with a short sword or gladius and a rectangular shield called a scutum, he was normally paired against a thraex (Thracian).

An archaeological dig in the heart of the City "will transform our understanding" of Roman London, experts claim.About 10,000 finds have been discovered, including writing tablets and good luck charms.The area has been dubbed the "Pompeii of the north" due to the perfect preservation of organic artefacts such as leather and wood.One expert said: "This is the site that we have been dreaming of for 20 years." Archaeologists expect the finds, at the three-acre site, to provide the earliest foundation date for Roman London, currently AD 47. The site will house media corporation Bloomberg's European headquarters.

It contains the bed of the Walbrook, one of the "lost" rivers of London, and features built-up soil waterfronts and timber structures, including a complex Roman drainage system used to discharge waste from industrial buildings.

#A technique based on the same kind of technology used in airport scanners has revealed images beneath a fresco held at the Louvre museum in Paris.
Trois Hommes Armes de Lances was known to be a fresco forged by Giampetro Campana on a wall from Roman times.
The new research suggests that under that forgery lies a real Roman fresco.
The discovery was announced at the American Chemical Society meeting by Bianca Jackson of the University of Rochester in the US.
Terahertz waves are known for their ability to penetrate materials without damaging them, and have in recent years been added to the suite of tools used to examine items of cultural heritage.