A Roman sculpture of a Cotswold god has been found in a castle cupboard after being missing for over 100 years.

The artefact, dated 150-350AD, was first found during an archaeological dig on the estate of Sudeley Castle in 1875.

But when historians found records of the discovery in the 1960s, there was no trace of the sculpture.

The Roman altar God has now been found in a basement cupboard during a clear out at the Gloucestershire castle.

The engraved figure, found earlier this month, wears a conical cap, tunic and cloak and holds a bow and arrow.

It has been identified by historians as Cotswold deity Apollo the Hound Prince or Apollo Cunomaglos.
Experts believe there are only seven other known depictions, four from the Cotswolds and three from London, and say the discovery is a significant find.

Read the rest of this article...
Posted by David Beard MA, FSA, FSA Scot at 3:37 PM No comments:

Conservation work on the figurine has taken four months to complete

A restored Roman cockerel figurine is the best result from a Cirencester dig in decades, archaeologists have said.
The enamelled object, which dates back as far as AD100, was unearthed during a dig in 2011 at a Roman burial site in the town.
It has now returned from conservation work and finders Cotswold Archaeology said it "looks absolutely fantastic".
The 12.5cm bronze figure was discovered inside a child's grave and is thought to have been a message to the gods. 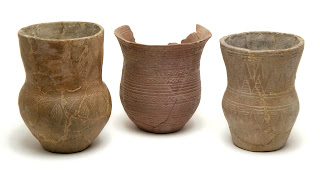 
Excavations at the Hinkley C site have revealed the remains of a 3,000-year-old Bronze Age settlement.

Archaeologists have also discovered the first Saxon grub hut to be found in Somerset, and a number of Roman features and artefacts, including a grain drier, quern stones, a stone anchor, fishing net weights, jewellery and graves.

The work was funded by EDF Energy as part of its site preparations and carried out by Somerset County Council.

recently-completed cemetery excavation close to Colchester’s Roman circus has revealed that some of Camulodunum’s citizens marked their grave plots with ditches and wooden fences. It had previously been speculated that, during the Roman period, those unable to afford stone monuments might have used wooden markers or mounds of earth to distinguish individual burials. Now a four-month investigation by Colchester Archaeological Trust has unearthed clusters of inhumations dated by grave goods and other finds  to the 2nd and 3rdcentury and surrounded in some cases by lines of small post-holes up to about 20cm in diameter.
‘This is certainly extremely unusual – I have never seen anything like it before,’ said CAT chief archaeologist Philip Crummy. ‘We have excavated about 400 inhumations and cremations here with much that is unusual. For example, we found areas of fenced burials at either end of the site, 80m apart, and it seems we are dealing not with one great cemetery area but a collection little plots used by different groups or families.’


A tiny scrap of wool found during an archaeological dig in Maryport has unlocked a piece of history.

Archaeologists revealed this week that the dig at Camp Farm last summer has unearthed what appears to be a Christian church, dating back to the 5th or 6th century.

Experts believe the possible church, built in an east-west direction, was positioned so it could be seen at Whithorn, the cradle of Christianity in Scotland, on the other side of the Solway Firth.

They revealed their findings exclusively to a Maryport audience crowded into the town’s Senhouse museum on Tuesday night.

Tony Wilmott, site director, said that volunteers on the dig had discovered what appeared to be Christian long cist graves. In one they found fragments of bone and a tooth. 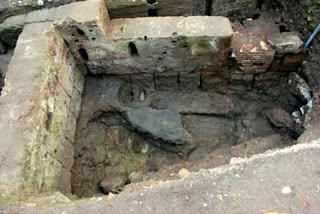 The ruins of the temple identified by Italian archaeologists as the one built by Romulus in 750 BC, after winning the battle against the Sabines [Credit: Archeologia Viva]

The temple built by Romulus to celebrate the hand of Jupiter giving Roman troops their unstoppable force has been found at the foot of the Palatine Hill, Italian archaeologists say.

The ruins of the shrine to Jupiter Stator (Jupiter the Stayer), believed to date to 750 BC, were found by a Rome University team led by Andrea Carandini. "We believe this is the temple that legend says Romulus erected to the king of the gods after the Romans held their ground against the furious Sabines fighting to get their women back after the famous Rape (abduction)," Carandini said in the Archeologia Viva journal.

So, what did the Romans do for us? New digs reveal truth about Hadrian's Wall

Stretching the breadth of northern England, Hadrian's Wall is a majestic reminder of the ambition and might of the Roman Empire's conquest in Britain. Now, new archaeological evidence has suggested, contrary to previous belief, that the Romans far from co-existing peacefully with the locals, ejected them by force in order to build the 73-mile divide.

The Unesco World Heritage Site stretches from the Solway Firth in the west to Wallsend on the river Tyne in the east. Construction was ordered by the Emperor Hadrian and started in AD122. It was Roman Britain's most ambitious building project, designed primarily to mark the northern limit of the Empire.

For decades, archaeologists struggled to date the indigenous communities around the wall because the site yielded very few artefacts. The only way of dating these Roman and pre-Roman Iron Age settlements was to excavate what little there was. Since the 1970s, when serious excavation began, experts believed the local population living in the shadow of the wall had actually flourished under the Roman invaders. But the new evidence suggests the Roman legions actually cleared a 10-mile stretch in front of the wall by force.

Ancient Romans are known for eating well, with mosaics from the empire portraying sumptuous displays of fruits, vegetables, cakes — and, of course, wine. But the 98 percent of Romans who were non-elite and whose feasts weren't preserved in art may have been stuck eating birdseed.
Common people in ancient Rome ate millet, a grain looked down upon by the wealthy as fit only for livestock, according to a new study published in the March issue of the Journal of Anthropological Archaeology. And consumption of millet may have been linked to overall social status, with relatively poorer suburbanites eating more of the grain than did wealthier city dwellers.
The results come from an analysis of anonymous skeletons in the ancient city's cemeteries.
"We don't know anything about their lives, which is why we're trying to use biochemical analysis to study them," said study leaderKristina Killgrove, an anthropologist at the University of West Florida.