For 18 long summers, a quiet corner of Hampshire has resounded to the sound of tapping, scraping, and sloshing. But after Saturday all that will end. 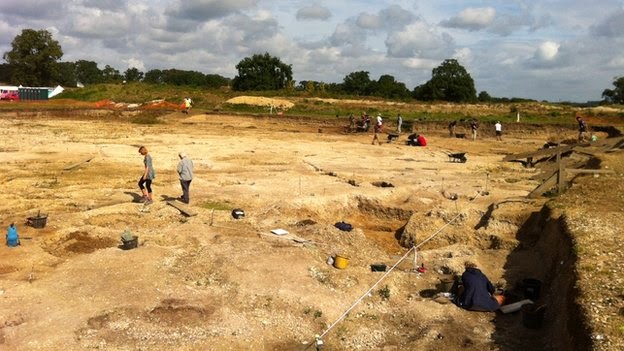 Silchester - the site of one of Britain's longest running archaeological digs - has revealed many secrets since 1997.

It's thanks to the hard work of thousands of volunteers, students and staff from Reading University that we now know much more about Iron Age life, and the early Roman period around the time of the invasion of AD 43.

"It's been a great experience," said Professor Michael Fulford, who has directed the annual summer dig from the beginning.

Students from the Institute of Archaeology, University of Warsaw, explore the Roman baths. Photo by R.Karasiewicz-Szczypiorski.


In Gonio, south of Batumi, a team of researchers has discovered baths built and used by the Roman army about 2000 years ago. "We were surprised by both the age of the structure, as well as its buid quality" - told PAP Dr. Radosław Karasiewicz-Szczypiorski, head of the excavation.
Research is conducted inside the ancient fort Apsaros built by the Romans in the 2nd half of the 1st century AD. Near the fortress ran once the only convenient road from Colchis (Western Georgia) to the Roman provinces in Asia Minor.

"In general, thermal baths built for the military were not luxurious. That is why we were surprised by the discovery of mosaics ornamenting the floor. We also unveiled a large part of cool water pool, so-called frigidarium" - described Dr. Karasiewicz-Szczypiorski.

Read the rest of this article...
Posted by David Beard MA, FSA, FSA Scot at 5:30 PM No comments:

Bath under Byzantine-era church to come to light soon

The Roman bath under the Balatlar church will be completely unearthed

A found bath under the Byzantine-era church Balatlar in the northern province of Sinop is gradually being revealed with excavations. The head of excavations, Mimar Sinan University Professor Gülgün Köroğlu said they had reached the bath and were continuing to unearth it. The Sinop Balatlar Church archaeological work has been continuing since 2010 on architectural remains. Köroğlu said they were working with a 40-person team and plan to extend the excavation area through expropriation. “We are mostly working on an area called ‘palesta,’ which is the big hall. Because there was a monastery on top of the structure, we are unearthing a cemetery field. Anthropologists are examining it. We also reached the pool of the Roman-era bath in lower stages. Works will continue for six more weeks. At the end of the season, we will shed light on the history of Sinop,” she said.

Read the rest of this article...
Posted by David Beard MA, FSA, FSA Scot at 5:27 PM No comments:


Important finds dating back to the Iron Age and Roman period have been uncovered at the site of a new bypass to be built as part of the Hinkley C project. 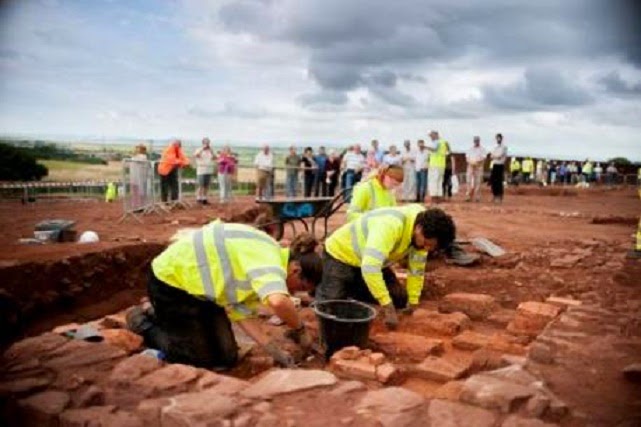 Archaeologists working at the site of the Cannington bypass  [Credit: Latitude Photography]

Archaeologists working at the site of the Cannington bypass revealed their discoveries to local residents on Thursday when EDF Energy and Somerset County Council invited local stakeholders to take a look.

The dig is being carried out at the site of a planned Cannington bypass which will be built to help serve the proposed Hinkley Point C nuclear power station.

Read the rest of this article...
Posted by David Beard MA, FSA, FSA Scot at 5:25 PM No comments:

During a four-year excavation of an Etruscan well at the ancient Italian settlement of Cetamura del Chianti, a team led by a Florida State University archaeologist and art historian unearthed artifacts spanning more than 15 centuries of Etruscan, Roman and medieval civilization in Tuscany.

"The total haul from the well is a bonanza," said Nancy de Grummond, the M. Lynette Thompson Professor of Classics at Florida State. De Grummond, who has performed work at the site since 1983, is one of the nation's leading scholars of Etruscan studies.

"This rich assemblage of materials in bronze, silver, lead and iron, along with the abundant ceramics and remarkable evidence of organic remains, create an unparalleled opportunity for the study of culture, religion and daily life in Chianti and the surrounding region," she said of the well excavation that began in 2011, which is part of a larger dig encompassing the entire Cetamura settlement.

A July 4 news conference at Italy's National Archaeological Museum in Siena drew a standing-room-only crowd as de Grummond and her team reported on their findings from the well excavation over the past four years. Among the most notable finds: 14 Roman and Etruscan bronze vessels, nearly 500 waterlogged grape seeds and an enormous amount of rare waterlogged wood from both Roman and Etruscan times.

Read the rest of this article...
Posted by David Beard MA, FSA, FSA Scot at 6:03 PM No comments:


A bronze warship ram raised from the seafloor in Sicily marks the expansion of the only ancient naval battle site discovered. 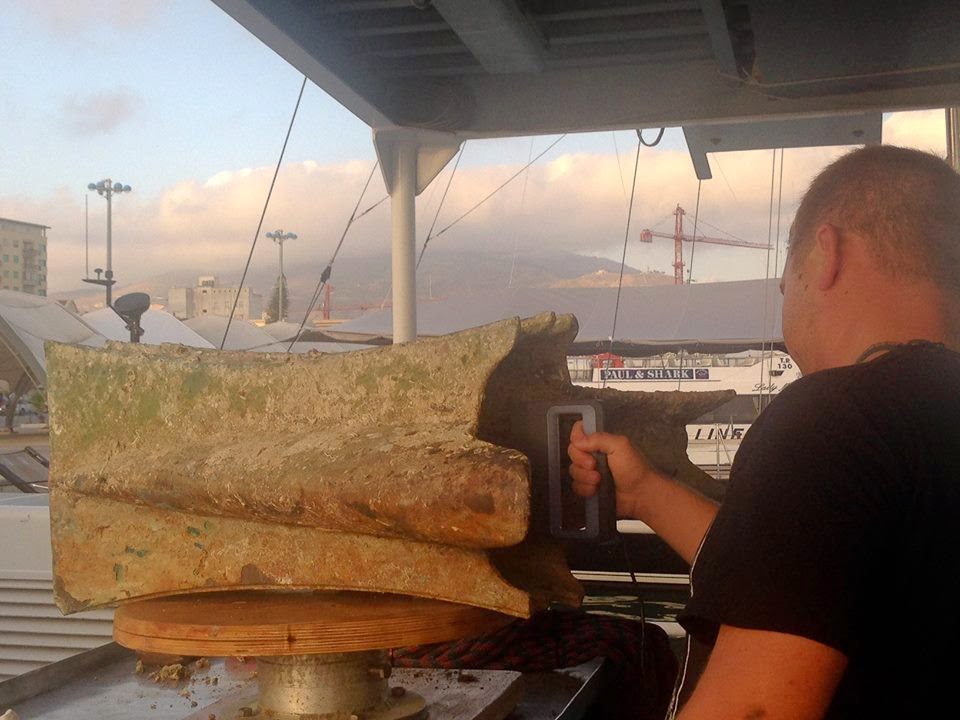 The bronze ram was affixed to the bow of an ancient warship that sank in 241 B.C. as part of the final battle between the Romans and Carthaginians during the First Punic War.

This is the eleventh warship ram from this archaeological site, the largest collection of ancient warship rams ever found.

Read the rest of this article...
Posted by David Beard MA, FSA, FSA Scot at 5:51 PM No comments:

Mike Heyworth with the bone fragments found in a mound of excavated soil.


Mike Heyworth, president of the Council for British Archaeology, was trudging home after a long, hot day in the office when he was startled to find fragments of Roman bone and pottery lying on a heap of soil at the end of his road.
The trench dug by a utilities company in York, which had sliced through an ancient cemetery, was on the corner of a residential street near the city's racecourse.
But it was also just across the road from a site that made headlines worldwide:, a pit under suburban back gardens where more than 80 skeletons of young gladiators – including one with bite marks from a lion, and decapitated skulls with the marks of hammer blows – were excavated.
Read the rest of this article...
Posted by David Beard MA, FSA, FSA Scot at 4:46 PM No comments:

Altars dedicated to gods, one of the oldest temples of its era ever discovered, a mystery monument and the disparities between domestic and ritual habits in Roman times will be foremost in the minds of archaeologists in Cumbria between now and next summer, with a fourth season of work next to the Senhouse Roman Museum – the scene of a largely unexplored Roman fort and settlement – yielding an intriguing range of fresh discoveries.Experts and enthusiasts have spent six weeks on the Maryport Roman Temples project. Buoyed by the excavation of a rectangular classical temple last year, the team returned to the area it was found in, uncovering a large stone circular structure, evidence for an open gathering area and the foundations for a large monument.

Read the rest of this article...
Posted by David Beard MA, FSA, FSA Scot at 2:51 PM No comments: