Today, the serene waters of Lake Nemi make it a quaint getaway, one that is best known for its peaceful landscapes and the area's delicious wild strawberries.
But in ancient Roman times, the volcanic lake southeast of Rome was the anchor point for Emperor Caligula's pleasure ships - massive and ornate barges that were rumored to be the sites of wild orgies and other excessive indulgences.
For nearly 2,000 years, the sunken remains of Caligula's pleasure ships tantalized divers, who launched expeditions to recover them, with little success.
It wasn't until 1927, when Italian dictator Benito Mussolini ordered Lake Nemi drained, that two of the ships began to be fully revealed. Measuring 230 and 240 feet long, the "Nemi ships" recovered over the next several years astounded researchers with their advanced technology.
Read the rest of this article...
Posted by David Beard MA, FSA, FSA Scot at 10:04 AM No comments:

A Lost Roman City Has Been Discovered in Southern France

For the first time in over a thousand years, archeologists have laid eyes on the ancient Roman town of Ucetia, which is decked out with some surprisingly well-preserved mosaics.

The discovery by the French National Institute for Preventive Archaeological Research (INRAP) was made near modern-day Uzès in the south of France during the construction of a school. The 4,000-square-meter (43,056-square-foot) site contains artifacts ranging from the Roman Republic era (1st century BCE) to the late antiquity (7th century), right through to the Middle Ages.

The town’s existence was first hinted at when researchers found an inscription saying Ucetia on a stone slab in nearby Nîmes. A few isolated fragments and mosaic pieces suggested the site of the mysterious Roman town, but it remained hidden until INRAP started to dig beneath the surface.

The aqueduct. Photo: Archaeological Superintendency Rome
A 2,300-year-old aqueduct uncovered by workers on Rome's new Metro line has been hailed as "a sensational discovery of enormous importance" by the city's Superintendency for Archaeology.
Archaeologists first stumbled across the impressive ruin at the end of 2016, though it was not publicly announced until Sunday. On Wednesday, the team presented the results of analysis of the structure, along with that of other recent finds, at a conference hosted by Rome's Sapienza university.

Simona Morretta, who led the team of archaeologists, said the 32-metre stretch was likely part of the Aqua Appia - the oldest known Roman aqueduct, which dates back to 312 BC.
Read the rest of this article...
Posted by David Beard MA, FSA, FSA Scot at 9:51 AM No comments: 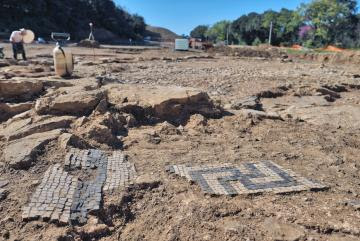 Read the rest of this article...
Posted by David Beard MA, FSA, FSA Scot at 9:45 AM No comments: A Roman ring, found at the dig. Photo: William Hoogteyling via HH

Archeologists digging at a site in Tiel in the province of Gelderland, have found a rich haul of Roman artefacts, among which a statue of the god Jupiter, a grave stone inscribed DEAE (to the goddess), 2,500 bronze objects and a unique ointment pot.

The dig is one of a number of archaeological activities taking place on an 80 hectare site which is projected to become part of the adjacent Medel industrial estate. As with any major construction work, archaeologists are invited to investigate what is in the ground before any building is done.

The area has yielded treasure before. In November last year archaeologists found numerous artefacts dating back some 6,000 years, and a Roman funerary urn with a small glass bottle inside it.