A decapitated body with its head placed between its legs and two skeletons buried in rare fully extended positions have been discovered during an excavation at a proposed £250 million armed forces training facility in Hampshire, where archaeologists say the late Roman community may have been rooted in tribal tradition.At least 11 burials have been found at Worthy Down, notable for their “surprisingly wide” range of interment practices and typically hobnailed Roman footwear and boots.

“The contrast between how these Romans lived and how modern service personnel will live in the new facilities we’re providing is stark,” said Stuart Adamson, the Project Manager who oversaw the preparatory groundwork for the Defence Infrastructure Organisation.

Read the rest of this article...
Posted by David Beard MA, FSA, FSA Scot at 5:37 PM No comments:


The discovery of 23 Roman skeletons in Lincoln is one of the most significant finds in the city in recent years, say archaeologists. 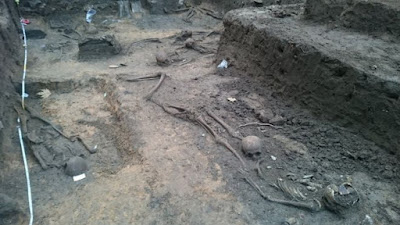 Flats are due to be built on the site where the skeletons were found
[Credit: City of Lincoln Council]

Despite being a major Roman colony, few burial sites from the era have been unearthed compared to places like York or Winchester.

Now experts say they hope to "fill a huge gap our knowledge" about people who lived there in ancient times.

The dig took place in the Newland area, ahead of the construction of flats.

Read the rest of this article...
Posted by David Beard MA, FSA, FSA Scot at 4:50 PM No comments:


Archaeologists say they have proven for the first time that Julius Caesar set foot on what is now Dutch soil, destroying two Germanic tribes in a battle which left around 150,000 people dead. 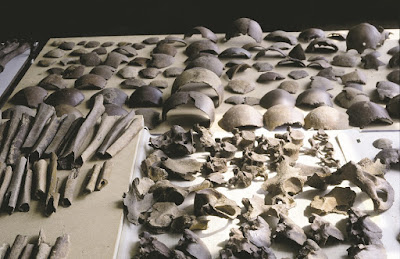 Hundreds of bones have been found at the site, which were analysed using  radiocarbon dating [Credit: VU University]

The two tribes were massacred in the fighting with the Roman emperor in 55 BC, on a battle site now at Kessel, in the southern province of Brabant.

A wealth of skeletons, spearheads, swords and a helmet have been dug up at the site over the past three decades.

Read the rest of this article...
Posted by David Beard MA, FSA, FSA Scot at 6:21 PM No comments:

A large Roman ship that sank full of fish sauce has been discovered of Italy's coast.
Photo:Boris Horvat/AFP


Archaeologists have discovered an ancient Roman vessel laden with 3000 jars of delicious Roman fish sauce – or garum – on the seabed off the coast of Italy.

The find was presented on Thursday by archaeologists, who spent almost two years searching for the 25-meter wreck in the deep blue waters five miles of the coast of Alassio, in the northeastern Liguria region.
"It's an exceptional find that dates to the first or second century AD," Dr. Simon Luca Trigona, who led the team, told The Local.

“It's one of just five 'deep sea' Roman vessels ever to be found in the Mediterranean and the first one to be found off the coast of Liguria. We know it was carrying a large cargo of garum when it sank."
Read the rest of this article...
Posted by David Beard MA, FSA, FSA Scot at 6:15 PM No comments:

Dutch archaeologists claim they have proof Roman emperor Julius Caesar spent time in what is now present day the Netherlands, after finding remains of a battle site near Oss in Brabant.

They say they have found the location where Caesar fought against two German tribes in 55 BC and that this is the first battle field in the Netherlands. Archaeologist Nico Roymans of Amsterdam’s VU University, says this is the first time the presence of Julius Caesar on Dutch soil has been proved. Until now, the site of the battle, which Caesar describes in his account of the Gallic wars, De Bello Gallico, was unknown.Read more at DutchNews.nl: Dutch archaeologists find proof of Julius Caesar-led massacre in the Netherlands http://www.dutchnews.nl/news/archives/2015/12/dutch-archaeologists-find-proof-of-julius-caesar-led-massacre-in-the-netherlands/

Read the rest of this article...
Posted by David Beard MA, FSA, FSA Scot at 6:05 PM No comments:


Archaeologists from University of Leicester Archaeological Services (ULAS) have unearthed new evidence of Roman and medieval Leicester after recently completing the excavation of two areas at the former Southgates Bus Depot, on the corner of Southgates and Peacock Lane in the centre of Leicester. 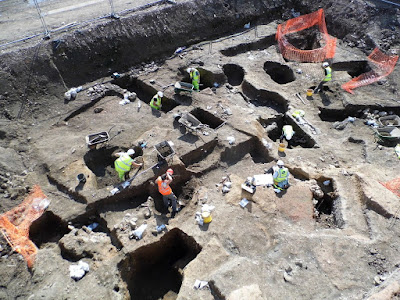 Archaeologists excavate large areas of medieval and post-medieval  pitting in the backyards of properties running along Southgates  [Credit: University of Leicester]

Archaeologists, led by John Thomas and Mathew Morris of ULAS, have been investigating a series of medieval and post-medieval backyards dating from the 12th century through to the 16th century. These are likely to be associated with densely packed houses and shops which would have once fronted onto the important medieval street of Southgates.

Read the rest of this article...
Posted by David Beard MA, FSA, FSA Scot at 6:02 PM No comments:


A haul of valuable coins issued by Roman general Mark Antony have been discovered in a Welsh field - more than 2,000 years after they were buried. 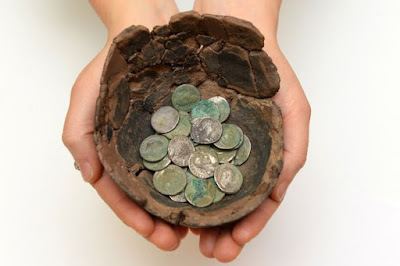 The coins issued by Mark Antony were discovered in a Welsh field  [Credit: Wales News Service]

It comes as archaeologists claimed to have found a small Roman fort on Anglesey, North Wales, in what has been described as a "ground-breaking" discovery.

The coins - unearthed by two friends out walking - have been hailed by historians as "a significant find".

Dr Richard Annear, 65, and John Player, 43, found the silver coins dating back to 31 BC buried in a field near the small village of Wick, South Wales.

Read the rest of this article...
Posted by David Beard MA, FSA, FSA Scot at 11:07 AM No comments: