Archaeologists from University of Leicester Archaeological Services (ULAS) have recently excavated a Late Roman cemetery at Western Road in Leicester’s West End. Amongst the 83 skeletons recorded by the team, one burial is proving to be very exciting.


The simple grave in question had been dug into mudstone on the west bank of the River Soar, to the south-west of the Roman town close to the important road known as the Fosse Way. Buried in the grave were the remains of a middle-aged man wearing an elaborately decorated belt in a style that would have been worn by a Late Roman soldier or civil servant during the second half of the 4th century or the early 5th century AD.
Read the rest of this article...
Posted by David Beard MA, FSA, FSA Scot at 10:12 AM No comments:

Rome's Colosseum was visibly cleaner on Friday as Italy showed off the latest phase of restoration of one of its most famous landmarks. 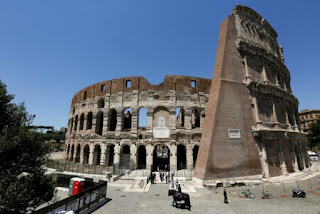 Prime Minister Matteo Renzi, speaking on a stage in the amphitheatre built to host gladiatorial contests nearly 2,000 years ago, hailed the mammoth clean-up project as an example for protecting the country's vast cultural heritage.Italy's monuments were neglected for decades amid shrinking government funding and alleged mismanagement, which put some of its 51 UNESCO World Heritage sites at risk of crumbling.

Read the rest of this article...
Posted by David Beard MA, FSA, FSA Scot at 6:01 PM No comments:


Located in Austria, the archaeological site is providing rich new details about the lives and deaths of the arena combatants

Woolfgang Neubauer stands in the grassy clearing and watches a drone soar low over distant stands of birch and white poplar, the leaves still speckled with overnight rain. Vast fields of wheat roll away north and south under a huge dome of sky. “I’m interested in what lies hidden beneath this landscape,” says the Austrian archaeologist. “I hunt for structures now invisible to the human eye.”

On the edge of the meadow, two boys stand a long way apart, arms clenched by their sides, punting a soccer ball very slowly and carefully from one to the other. Neubauer studies them keenly. A professor at the Vienna Institute for Archaeological Science, he’s an authority on the first games played on this ersatz pitch, a blood sport popular a couple of millennia ago. “You see a field,” he tells a visitor from the United States. “I see a gladiator school.”

Read the rest of this article...
Posted by David Beard MA, FSA, FSA Scot at 12:42 PM No comments:

The archaeologists who have carried out the recent preparatory excavations of the Western Gate of the AncientRoman city of Serdica, the predecessor of today’s Bulgarian capital Sofia, have discovered a wooden structure which was probably part of an ancient moat bridge.
The excavations of Serdica’s Western Gate started in May 2016, and were wrapped up in a month to prepare the site for a restoration project funded by the Norway Grants and EEA Grants with nearly BGN 947,000 (app. EUR 500,000), which is supposed to be executed over the summer.
One of the most interesting finds dating back to the 2nd-4th century AD that have been unearthed by the archeological team are the wooden remains from a bridge of Roman Serdica. The discovered wooden structure was probably used to prop up the bridge. It was found right in the section right in front of the Western Gate.
Read the rest of this article...
Posted by David Beard MA, FSA, FSA Scot at 12:31 PM No comments:


A recent archaeological dig near Meonstoke, Hampshire, has revealed the foundations of a Roman building with a very rare hexagonal shape. 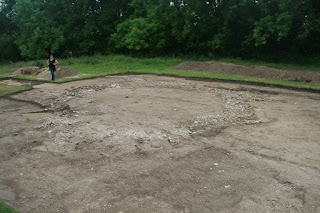 The discovery was made by the amateur Meon Valley Archaeology and Heritage Group, led by University of Winchester archaeologist Dr Nick Stoodley, using geophysical equipment on loan from Historic England.

“Only one other like this has been discovered in Britain,” said Tony King, Professor of Roman Archaeology at the University of Winchester and director of the excavation. “It is a wonderful chance for the University’s undergraduate students to excavate such a site. We are speculating whether we are seeing a pagan temple or some other type of building, and we have uncovered a Roman bathhouse very close by.”

Meonstoke villagers Alison Smalley and John Snow have been organising support from the other Meon Valley villages. Armed with trowels and kneels, around eighty people of all ages took part in groups of 12 a day.

Read the rest of this article...
Posted by David Beard MA, FSA, FSA Scot at 8:09 AM No comments:


One of the largest and well-preserved theatres of Greek antiquity opened to the public for the first time after 2,000 years last week in the city of Larissa in Thessaly, Greece. 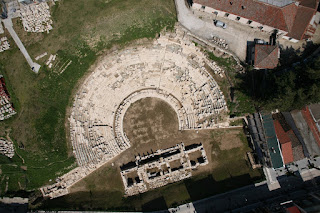 Dating back to the early third century BC, the ancient theatre of Larissa lies on the south slope of the Medieval fortress at the city's heart, archaeologist Stavroula Sdrolia, head of the seventh Ephorate of Byzantine Antiquities said.

In antiquity, apart from theatrical performances, it also hosted the assemblies of the senior regional authority, while at the end of the first century BC, it was turned into a Roman arena, she explained.

Read the rest of this article...
Posted by David Beard MA, FSA, FSA Scot at 2:36 PM No comments: