A treasure of 187 silver Roman imperial coins was discovered during excavation works in the town of Mezdra, North-West Bulgaria. It has a great cultural-historical and numismatic value, experts say.

The silver treasure was in a clay pot and was found under the roots of an old tree. Historians define the coins as Roman imperial denarii and antonianians, which were minted for a period of two hundred years. They depict the faces of emperors and their wives who lived from the first half of the first century to the middle of the third century.

Archaeologists, however, argue that the find which is now in the museum in the city of Vratsa, is only a small part of the real treasure. It confirms again that in the place of today's Mezdra there was a rich central town with thousands of years of history.

Read the rest of this article...
Posted by David Beard MA, FSA, FSA Scot at 3:51 PM No comments:

How the Romans fed their legions thousands of miles from home

Conquering Romans relied on resources from near and far to sustain their forces against the native tribes in Wales, according to new research by Cardiff University archaeologists. 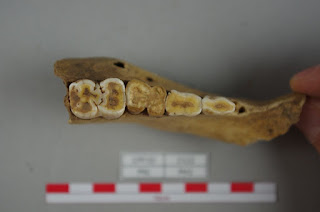 In a study published in Archaeological and Anthropological Sciences, Dr Peter Guest and Dr Richard Madgwick of the University’s School of History, Archaeology and Religion, used biochemical techniques of animal remains to reveal the origin of livestock supplied to the legionary fortress at Caerleon.

Prior to the study, leading theories argued that locally produced agricultural resources must have been vital in feeding and maintaining the substantial occupying army, though this idea was based on very limited evidence.

Using strontium isotope analysis to analyse the bones of domestic animals from the fortress, the researchers identified a mix of sources. Significantly, the diverse pattern of results does not suggest a centralised supply chain from near or far – results that challenge existing theories.

Read the rest of this article...
Posted by David Beard MA, FSA, FSA Scot at 11:00 AM No comments:

A part of Hadrian's Wall has been found in Newcastle city centre, shedding new light on its route

Hadrians’s Wall has been uncovered during site investigations as part of a scheme to revive a historic building in Newcastle city centre.
The section of the wall has been revealed outside the Mining Institute on Westgate Road.
It was reportedly last seen during an excavation on the site in 1952.
But Simon Brooks, acting general manager of the Mining Institute, said: “There was some controversy about whether the Wall had been found. A lot of people were sceptical but now we have proof positive and we are delighted.”
Read the rest of this article...
Posted by David Beard MA, FSA, FSA Scot at 6:47 PM No comments: