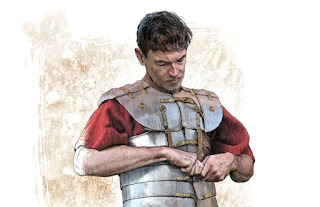 Archaeologists have discovered the oldest and most complete Roman body armour at the site of the  Battle of the Teutoburg Forest in Kalkriese, Germany. Before this find, the earliest known examples of Roman lorica segmentata — iron plate sections tied together — were found in Corbridge, UK, and date to the 2nd century. Those were fragments. The Kalkriese armor is a complete set, and includes an extremely rare iron collar used to shackle prisoners.
More than 7,000 objects have been found at the Kalkriese battlefield site, from weapons to coins to items of everyday use. In the summer of 2018, a metal detector scan of the side wall of an excavation trench retuned 10 strong signals, indications of a large quantity of metal inside the bank. To ensure whatever was in there wasn’t exposed to the air and rapid oxidization, archaeologists removed the entire soil block containing the mystery metallics.
The first step was to scan the block to see what was inside and map out its excavation. The block was too big for regular X-ray machines, so  they transported the crate to the Münster Osnabrück International Airport where the customs office has a freight-sized X-ray machine. All they could see was nails of the wooden crate and a large black hole in the shape of the soil block.
In 2019, it was sent to the Fraunhofer Institute in Fürth which has the world’s largest CT scanner — a circular platform more than 11 feet in diameter that rotates while the X-ray apparatus moves up and down — more than big enough for the crate to fit and powerful enough to see inside the dense soil block. The scan revealed the remains of a cuirass — the section of a lorica segmentata where the breastplate and back plate are buckled together. The plates of the armour were pushed together like an accordion by the weight of the soil pressing on down them for 2,000 years.
Here’s a nifty digital animation by the Fraunhofer Institute generated from the CT scan data that reveals the armour inside the soil block.
Armed with the detailed scans, restorers were able to begin excavation of the soil block. They found that despite Kalkriese’s highly acidic sandy soil, the armour is relatively well-preserved. There is extensive corrosion of the mental, but the set is uniquely complete with hinges, buckles, bronze bosses and even extremely rare surviving pieces of the leather ties. The plates from the shoulder and chest have been recovered and restored. The belly plates are still in the soil block. There are no arm plates in this early design.
Iron plate armour was introduced by Augustus as an improvement on chain mail. It was relatively light (around 17 pounds) and because the plates were tied together with leather cords, they were much more flexible than chain mail. so it was the latest and greatest technology in 9 A.D. when Publius Quinctilius Varus blundered into a German ambush that obliterated three full Roman legions plus their auxiliaries.
The legionary who wore this armour apparently survived the battle because around his neck/shoulder area was a shrew’s fiddle, also known as a neck violin. This was an iron collar connected to two handcuffs that locked a prisoner’s hands in front of his neck. The Romans used them to shackle prisoners destined for slavery. This time the tables were turned, and the soldier died in shackles.
The restoration is ongoing and is expected to take another two years. Once it’s complete, the armour will go on display in an exhibition at the Kalkriese Museum and Park. 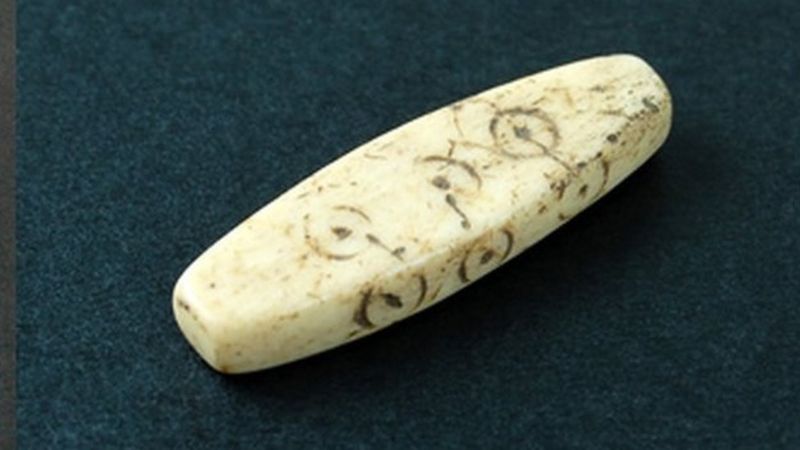 The piece was used for a game played by Roman soldiers
CHESHIRE WEST WITH CHESTER COUNCIL
A rare Roman gaming piece has been discovered by archaeologists working alongside council workers on the Northgate development in Chester.
The artefact, made from bone, was found with other Roman relics including a comb, a possible spearhead and a pin or broach.
Andrew Davison, Inspector of Ancient Monuments from Historic England, said the finds "will excite great interest."
They will be added to a collection of Roman relics at a local museum.
The lozenge-shaped gaming piece, just over an inch long (29mm), is highly polished, probably from use, and features a common Roman ring and dot motif.
Experts link it to Ludus Latrunculorum, meaning the Game of Mercenaries - a two-player military strategy board game played throughout the Roman Empire, similar to draughts.
Read the rest of this article...
Posted by David Beard MA, FSA, FSA Scot at 10:32 AM No comments: 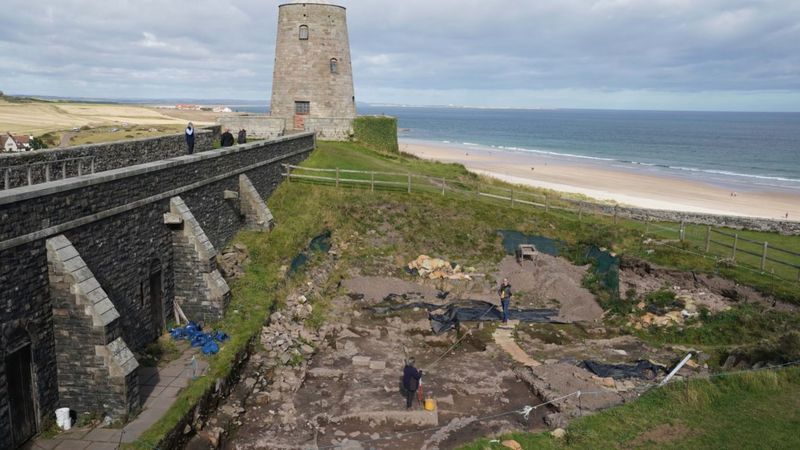 Excavations began at the castle in the 1960s OWEN HUMPHREYS/PA
A roundhouse thought to date back to the Romano-British period has been unearthed at Bamburgh Castle in Northumberland.
Foundations of the 40ft (12m) structure were discovered by volunteers from the Bamburgh Research Project.
Believed to be more than 2,000 years old, excavators hope it will help reveal gaps in the castle's history.
Project director Graeme Young said the "remarkable find" was one of the "most important" to be made at the site.
"It was sheer chance that we decided to dig that little bit further in the final days of digging here at the castle, otherwise we would have missed it.

THIS NORWEGIAN ISLAND CLAIMS TO BE THE FABLED LAND OF THULE

Greek explorer Pytheas traveled to what is now the British Isles and farther north in a trireme, exploring and mapping much of the coastline. He wrote of Thule, an island that people have searched for ever since. This illustration is by John F. Campbell from the 1909 book The Romance of Early British Life. (Chronicle/Alamy)
Residents of Smøla believe they live in the northernmost location mentioned in ancient Greek and Roman literature. Other contenders say not so fast.
On a Monday late in April 2020, the tiny, rocky, sparsely populated Norwegian island of Smøla, which had been sealed off from the outside world for three months, reopened its one point of access, a ferry terminal that connects it to the coastal cities of Trondheim and Kristiansund. The move brought joy to the residents of Smøla, who often travel to the mainland for supplies and recreation. It also gladdened tourists and adventurers, particularly those with an interest in the fabled land of Thule, also known as ultima Thule, whose exact location in the world has been debated for over two millennia. According to one recent school of thought, Smøla is the island with the strongest claim to that location: reopening Smøla thus meant that it was once again possible to set foot on Thule.
Read the rest of this article...
Posted by David Beard MA, FSA, FSA Scot at 9:49 AM No comments: