Historians and archaeologists have studied the ruins of the Roman Forum for centuries, employing the tools on hand to add to the knowledge of this center of Roman public life that hosted elections, triumphal processions, speeches, trials, shops and gladiatorial spectacles.

The latest research suggests these structures, which we know as white marble, may have been brightly painted.

Bernard Frischer, a classics and art history professor in the University of Virginia's College of Arts & Sciences, led a team of experts who used cutting-edge technology to find traces of yellow pigment on a bas-relief of a menorah on the forum's Arch of Titus. In its heyday, the yellow pigment would have appeared gold from a distance.

Frischer said the menorah has historical significance. "The menorah on the relief is extremely important to Jews, since it shows the menorah from the Second Temple in Jerusalem, which Titus captured and sacked in A.D. 70."

Read the rest of this article...
Posted by David Beard MA, FSA, FSA Scot at 10:21 PM No comments:

Expert says Roman and Celtic coins should go on tour 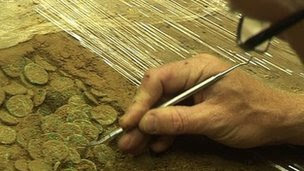 A marketing expert says the record find of Roman and Celtic coins in Jersey is a unique opportunity for the island.

Christopher Journeax, former head of marketing for Jersey Heritage, says the find worth up to £10m could be used as a travelling exhibition.

The coins, dating from about 50BC are thought to weigh about three quarters of a tonne.

Mr Journeax believes many people and not just archaeologists and specialists would want to see the treasure.

He said the Celtic coins could spark more interest in the island and its history.

Read the rest of this article...
Posted by David Beard MA, FSA, FSA Scot at 7:35 PM No comments:


Archaeologists in Greece's second-largest city have uncovered a 70-meter (230-foot) section of an ancient road built by the Romans that was the city's main travel artery nearly 2,000 years ago.

The marble-paved road was unearthed during excavations for Thessaloniki's new subway system, which is due to be completed in four years. The road in the northern port city will be raised to be put on permanent display when the metro opens in 2016.

The excavation site was shown to the public on Monday, when details of the permanent display project were also announced. Several of the large marble paving stones were etched with children's board games, while others were marked by horse-drawn cart wheels. Also discovered at the site were remains of tools and lamps, as well as the bases of marble columns.

Read the rest of this article...
Posted by David Beard MA, FSA, FSA Scot at 2:53 PM No comments: 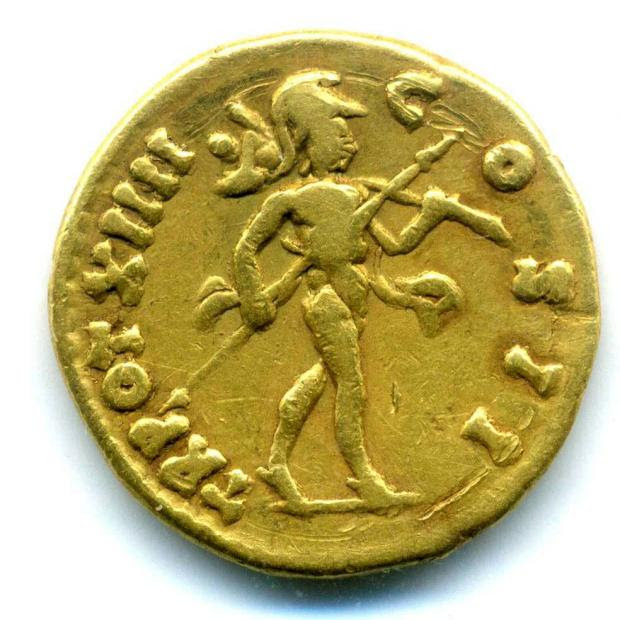 Roman coins collected by a numismatist will be auctioned off on July 3.

Proceeds from the specialist sale will go to the British Museum.

The late Kenneth Edwin Day, from Thames Ditton, was a leading figure in the Kingston Numismatic Society and keen Roman coin collector.

Auctioneer Morton and Eden will divide the coins between two sales and expected the collection to raise about £30,000.

The proceeds of both sales will be added to an acquisition fund set up so the museum can buy coins of significant to Britain and increase the accessibility of the national collection using new digital technology.

Read the rest of this article...
Posted by David Beard MA, FSA, FSA Scot at 10:22 AM No comments:

Roman fortress in Bulgaria to be restored


In two months' time, the repair works at the Roman fortress Sexaginta Prista near the Danube city of Ruse in northeastern Bulgaria are to be wrapped up, according to a media statement f the Ministry of Regional Development and Public Works.


The project envisaging the renovation and popularization of the ancient Roman fortress is worth around BGN 1.3 M which is provided under the Regional Development Operational Program, the beneficiary being the Ministry of Culture.  The project involves a major overhaul of the two remaining buildings on the territory of the fortress and the construction of a well-lit ramp that will facilitate access to the remains at Sexaginta Prista (""the port town of the sixty ships").

Our Londinium opens at the Museum of London


Change is afoot at the Museum of London, which today (22 June 2012) reopened its Roman gallery following the first major update to this section since it opened in 1994.

‘Our Londinium 2012’ draws parallels between life in Roman London and the city today. Funded by the Arts Council England, the redevelopment is part of the Cultural Olympiad Programme ‘Stories of the World’ and includes a wealth of new installations including audio-visual displays and interactive touchscreen maps.

Modern objects – mostly drawn from the London Archaeological Archive and Research Centre (see CA 267 for more on this record-breaking collection) – have been placed in two thirds of the gallery’s display cases beside Roman artefacts.

A bust of Hadrian recovered from the Thames foreshore and currently on loan from the British Museum is juxtaposed with ‘V for Vendetta’ masks worn during the recent anti-cuts protests to prompt discussion about power and authority and how these are challenged.

Read the rest of this article...
Posted by David Beard MA, FSA, FSA Scot at 6:05 PM No comments:


The Colchester Roman Circus is Getting a Visitor’s Centre

The site was excavated in advance of development and according to the Gazette online: “The eight starting gates of Britain’s only chariot circus were found under the gardens of the Sergeants’ Mess, off Circular Road North, in Colchester.

Read the rest of this article...
Posted by David Beard MA, FSA, FSA Scot at 10:41 AM No comments: