All That Glittered Was Not Gold In Roman Britain


An in-focus display of artefacts found by archaeologists as part of major project to upgrade the A1 to a motorway in North Yorkshire opens at the iconic Bowes Museum in Barnard Castle on Saturday 26 November 2016. 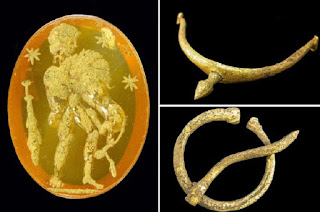 A carnelian intaglio of Hercules and the Lion, a brass plated boot spur and a

On the opening day, The Bowes Museum and Northern Archaeological Associates will also provide family activities based on archaeological findings on the road scheme. These drop in sessions, which include creating a paper mosaic; salt dough coin making and painting; creating a Roman helmet; pottery handling and viewing animal bones, will run from 11am - 3pm in the Museum’s Education Vaults and are free for children under 16 when accompanied by an adult for whom normal Museum admission applies.An archaeological team of around 60 people have been working along the A1 between Leeming Bar and Barton for three years as part of a Highways England scheme to install an extra lane in each direction and improve the route to motorway standards.During that time, archaeologists working on behalf of the Carillion Morgan-Sindall Joint Venture have uncovered more than 200,000 prehistoric and Roman artefacts and sieved more than 86 tonnes of sediment samples.

Read the rest of this article...
Posted by David Beard MA, FSA, FSA Scot at 8:02 AM No comments:

Archaeologists explore the mecca of Roman veterans in Bosnia and Herzegovina

The team during surface survey in unfavourable conditions due to intensive agricultural activity in the fertile valley. Photo by Anna Mech

Roman veterans and other settlers built their homes and villas two thousand years ago, guided by convenience - according to a study of Polish archaeologists in Bosnia and Herzegovina. That is why these structures were built on the edges of river valleys close to the road network.

"During this year's research we were able to find some previously unknown sections of Roman roads, including the Salona-Narona road that was key to the whole Roman province of Dalmatia" - explained the project leader, Tomasz Dziurdzik of the Institute of Archaeology of the University of Warsaw. Research is conducted in partnership with the University of Mostar, represented by Mirko Rašić.

Read the rest of this article...
Posted by David Beard MA, FSA, FSA Scot at 8:28 AM No comments:

A general view of Circus Maximus' newly opened archeological site, in Rome, Wednesday, Nov. 16, 2016. Six years of excavations have given Rome a new tourist attraction in Circus Maximus, an open-air archeological ruin that for centuries has been a vast muddy field, lately used mainly by dog-walkers. (AP Photo/Gregorio Borgia)


Six years of excavations have given Rome a new tourist attraction in Circus Maximus , the sprawling valley where chariot races once delighted the ancient city's denizens.
The archaeological ruin has long been a vast muddy, grassy field, lately used largely by dog-walkers and joggers.
But starting Thursday, the public can see ancient latrines, chunks of what was once a triumphal arch honoring the Emperor Titus , and learn about a winning horse dubbed Numitor, which ran on the oval track some 2,000 years ago.
Rome's newest tourist site comes as a counterpoint to Italy's often discouraging cultural developments, like the erosion by pollution or the crumbling of parts of monuments that can't be adequately protected by Italy's chronically lean budget for its enormous catalog of historical and artistic heritage.
Read the rest of this article...
Posted by David Beard MA, FSA, FSA Scot at 4:29 PM No comments:

Archaeologists are puzzled over the discovery of a Roman-era earthenware pot filled with oil lamps and bronze coins in the commune of Windisch, in the northern Swiss canton of Aargau

The pot was found under a street in the commune as part of an archaeological examination prior to the construction of a big new development comprising apartment blocks and commercial buildings, Aargau cantonal authorities said in a statement on Monday.
It is thought to have been buried almost 2,000 years ago, dating it from the time of the Roman legion camp Vindonissa, which was located near where Windisch is now.
Read the rest of this article...
Posted by David Beard MA, FSA, FSA Scot at 4:26 PM No comments:

A previously unknown building of Ancient Roman thermae (public baths) has been discovered during the construction of a residential building in the southern Bulgarian city of Plovdiv, the successor of ancient Philipopolis.

The well preserved walls of the Roman bath house have just been exposed in rescue excavations led by archaeologists Maya Martinova and Sofiya Hristova from the Plovdiv Museum of Archaeology, reports local news site Plovdiv24.
The discovery has been made on private property located at 13 Otets Paisiy (“Father Paisius") Street in downtown Plovdiv, which is also known as “Europe’s oldest city“.

The project for the construction of a residential building there has been controversial, first of all, because it provided for the destruction of a home from the 1920s with a cultural heritage status, but also because later one of the archaeologists noticed that the builders had reached structures from the Antiquity period.

Read the rest of this article...
Posted by David Beard MA, FSA, FSA Scot at 9:05 AM No comments: 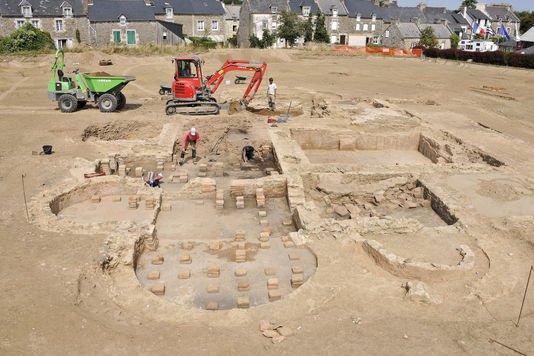 A LARGE Gallo-Roman villa has been uncovered in Brittany, on the site of a planned housing development. The remains of the impressive building - which features the largest private thermal baths ever found in the region - were uncovered by archaeologists with the Institut national de recherches archéologiques préventives (Inrap) on the banks of the river Rance at Langrolay-sur-Rance, Langrolay-sur-Rance, Côtes-d’Armor, 14km from Dinan.

Read the rest of this article...
Posted by David Beard MA, FSA, FSA Scot at 9:03 AM No comments: