Italian police released a video on Tuesday (June 23) showing a well-preserved ancient Roman ship that was recently discovered in waters off the coast of Sardinia. 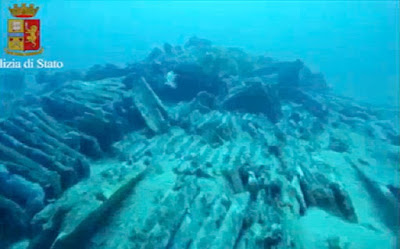 The well-preserved ancient Roman ship was found in the strait that separates  Sardinia from Corsica [Credit: Polizia di Stato]

In the video police officers were seen approaching the shipwreck as fish swam in the clear seas surrounding the Italian island.

Italian police said their historical discovery was made in collaboration with the Archaeological Superintendence, the country's ministerial institute for archaeology.

Read the rest of this article...
Posted by David Beard MA, FSA, FSA Scot at 5:47 PM No comments:

The final opportunity to visit the award-winning annual dig at the Maryport Roman Temples Project and learn about the excavation directly from lectures by the archaeologists involved has begun in Cumbria. The eight-week dig aims to explore Roman Maryport’s complex religious landscape and to learn more about the famous altars found at the site, on display in nearby Senhouse Roman Museum.

Read the rest of this article...
Posted by David Beard MA, FSA, FSA Scot at 5:58 PM No comments: