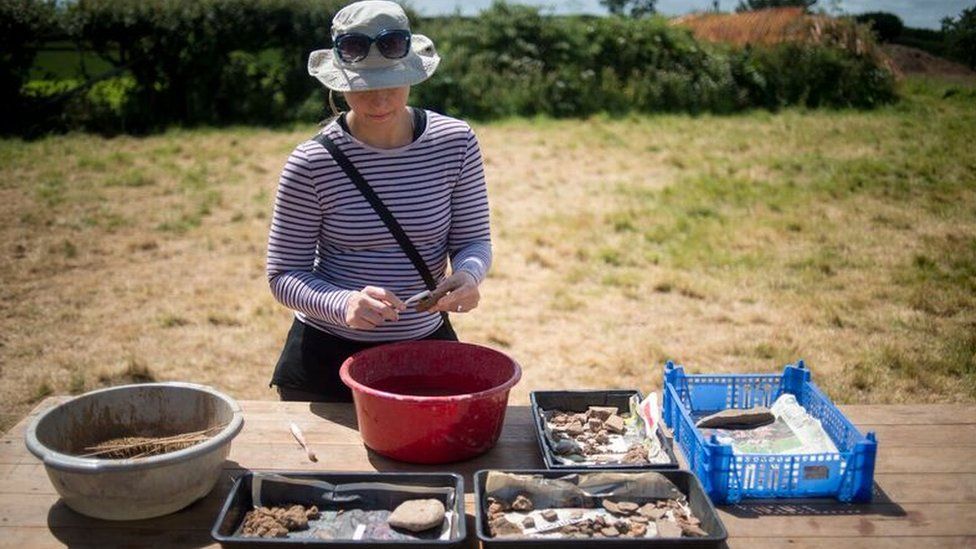 Archaeologists washing evidence of the iron works and pottery

Archaeologists say pre-Roman Britons who lived in a rural location since the 4th Century BC may have enjoyed Mediterranean oil and wine.

Radiocarbon analysis of a dig site showed there was a settlement at Ipplepen, Devon, for about 1200 years longer than previously thought.

The discovery of Roman pottery suggests there was a community trading widely with the Roman world.

University of Exeter archaeologists are digging at the site this month.

Read the rest of this article...
Posted by David Beard MA, FSA, FSA Scot at 4:32 PM No comments:

Digging for Rome's new subway has unearthed the charred ruins of an early 3rd-century building and the 1,800-year-old skeleton of a crouching dog that apparently perished in the same blaze that collapsed the structure. 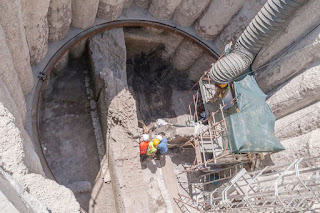 A significant discovery was made under Rome’s metro system [Credit: Getty]

Archaeologists on Monday said they made the discovery on May 23 while examining a 10-meter (33-foot) -deep hole bored near the ancient Aurelian Walls as part of construction work for the Metro C line.

"A Pompeii-like scene" was how the Culture Ministry described the findings that evoked comparisons to the inhabitants trapped by the 79 A.D. Vesuvius volcanic explosion and preserved for centuries in the ruins of Pompeii.

Read the rest of this article...
Posted by David Beard MA, FSA, FSA Scot at 4:18 PM No comments:

Read the rest of this article...
Posted by David Beard MA, FSA, FSA Scot at 4:15 PM No comments: 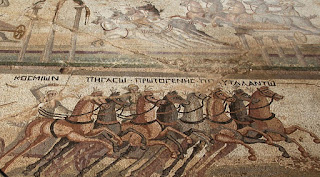 Scenes from a chariot race are depicted in a rare Roman mosaic found in rural Cyprus.
Dating from the 4th Century AD, it lies in Akaki, a village not far from Nicosia.
Only nine similar mosaics - showing a hippodrome race - have been found at ancient Roman sites.
The ornate 26-metre-long (85ft) mosaic was probably part of a wealthy man's villa. The excavation is led by archaeologist Fryni Hadjichristofi.

Read the rest of this article...
Posted by David Beard MA, FSA, FSA Scot at 6:51 PM No comments:

Ancient skulls shed light on migration in the Roman empire

Skeletal evidence shows that, hundreds of years after the Roman Republic conquered most of the Mediterranean world, coastal communities in what is now south and central Italy still bore distinct physical differences to one another -- though the same could not be said of the area around Rome itself.

Read the rest of this article...
Posted by David Beard MA, FSA, FSA Scot at 6:46 PM No comments: