Construction workers have unearthed 600kg of Roman bronze coins, a unique and "hugely important" discovery according to experts.


Routine building work in southern Spain unearthed a very unexpected find this week, when over 600kg of Roman coins were discovered.
The find is "unique in Spain and perhaps the world" experts said of the coins, which were stored in 19 Roman amphoras or containers.
"We have a team looking into the discovery right now, We believe it is hugely important and will have more information very soon," said a spokesman at Andalucia's Ministry of Culture in Seville told The Local on Thursday.
Read the rest of this article...
Posted by David Beard MA, FSA, FSA Scot at 5:18 PM No comments:

A rare find unearthed in a garden in Long Melford could point to the village being the “missing link” in a chain of Roman forts, it has been claimed.


A six inch tall figurine dating from the first or second century, known as a ‘pseudo Venus’, was dug up by volunteer archaeologists while they were working on a test pit at a property in the south of the village.
According to a county council archaeologist, the statue would have had religious significance and is a very “unusual” find.
Local heritage centre volunteers John Broughton, Kenneth Dodd and John Nunn came across the statue while they were carrying out a rescue dig in a garden that was due to be landscaped.
Read the rest of this article...
Posted by David Beard MA, FSA, FSA Scot at 5:08 PM No comments:

Rug designer Luke Irwin has discovered a Roman mosaic while laying electricity cables in Wiltshire.This stone coffin of a Roman child held geraniums until it was identified
© Jon Wilkes

Luke Irwin: “This is the most beautiful sort of unspoilt river valley and it’s sort of hidden away. On the hill which overlooks where we live there was a vast temple. Six miles away there was another vast temple.We are a mile from a Roman road. You can see undulations in the landscape and the general guess would be that this is a medieval  building thing going on – until you find a mosaic.

Read the rest of this article...
Posted by David Beard MA, FSA, FSA Scot at 7:31 PM No comments:

What could be considered an ancient motivational meme which reads “be cheerful, live your life” in ancient Greek has been discovered on a centuries-old mosaic found during excavation works in the southern province of Hatay.Demet Kara, an archaeologist from the Hatay Archaeology Museum, said the mosaic, which was called the “skeleton mosaic,” belonged to the dining room of a house from the 3rd century B.C., as new findings have been unearthed in the ancient city of Antiocheia.“There are three scenes on glass mosaics made of black tiles. Two things are very important among the elite class in the Roman period in terms of social activities: The first is the bath and the second is dinner. In the first scene, a black person throws fire. That symbolizes the bath. In the middle scene, there is a sundial and a young clothed man running towards it with a bare-headed butler behind. The sundial is between 9 p.m. and 10 p.m. 9 p.m. is the bath time in the Roman period.

Read the rest of this article...
Posted by David Beard MA, FSA, FSA Scot at 7:27 PM No comments: 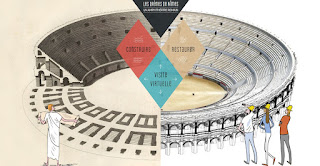 Read the rest of this article...
Posted by David Beard MA, FSA, FSA Scot at 7:29 PM No comments:

Luke Irwin was laying electric cables at his farmhouse when he came across an untouched Roman mosaic
An "elaborate" Roman villa has been unearthed by chance by a homeowner laying electric cables in his garden in Wiltshire.
It was discovered by rug designer Luke Irwin as he was carrying out some work at his farmhouse so that his children could play table tennis in an old barn.
He uncovered an untouched mosaic, and excavations revealed a villa described as "extraordinarily well-preserved".
Historic England said it was "unparalleled in recent years".

Read the rest of this article...
Posted by David Beard MA, FSA, FSA Scot at 7:26 PM No comments:

Roman Imperial leaders had wine empire away from the battlefield, study suggests

Archaeologists from the University of Sheffield have uncovered a unique insight into the life of one of the Roman Empire’s most prominent landowners.
Until now, very little was known about Rome’s Imperial leaders aside from their battle triumphs, territorial conquests and monumental legacies.
Researchers from the University of Sheffield’s Department of Archaeology investigating the vast Imperial estate of Vagnari in Italy, have now unearthed evidence of wine production on an industrial scale – shedding light on their home life away from the battlefield.
The excavation team discovered the corner of a cella vinaria, a wine fermentation and storage room, in which wine vessels, known as dolia defossa, were fixed into the ground.
Read the rest of this article...
Posted by David Beard MA, FSA, FSA Scot at 3:52 PM No comments:


Microbiologists based in the Institute for Global Food Security and School of Biological Sciences at Queen's University Belfast have recently released results that may have answered one of ancient history's greatest enigmas: Where did Hannibal cross the Alps? 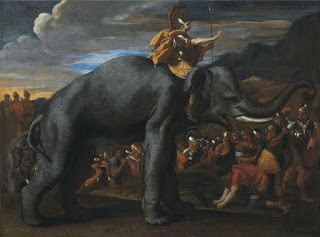 Hannibal crosses the Alps on an elephant  [Credit: Nicolas Poussin]

Hannibal was the Commander-in-Chief of the Carthaginian army during the Second Punic War with Rome (218 -201 BC). He famously led his troops (thirty thousand men, just thirty seven elephants and over fifteen thousand horses and mules) across the Alps to invade Italia - bringing the Roman army to its knees.

While the great general was ultimately defeated at Zama in 202 BC, this campaign is rightly regarded today as one of the finest military endeavours of antiquity. We can say, in retrospect, that these events ultimately shaped the future Roman Republic, eventually with Caesar morphing into the Empire, and therefore into European civilisation as we know it.

Has Hannibal's route across the Alps been uncovered? Scientists use 2,000-year-old trail of dung to track legendary general

The Col de la Traversette, a narrow pass between Grenoble in France and Turin in Italy
CREDIT: GOOGLE

It was one of the most outrageously bold manoeuvres in military history - and 2,000 years on experts are still trying to work out how he pulled it off.

But now the mystery of how Hannibal's army managed to catch the Romans off guard by crossing the Alps in an improbable 1,000-mile march could be solved, it is claimed, by tracking a trail of dung.

Scientists say that a thin crust of ancient excrement left by Hannibal's animals, which famously included 37 elephants, could reveal the route the legendary Carthaginian general took.

Hannibal's 30,000-strong army trudged through deep snow in the grip of winter in 218BC with more than 15,000 mules and horses before crossing into Italy where they nearly made it to the gates of ancient Rome.

But, according to experts, such a large movement of men and animals must have left what they describe as a "mass animal deposition event".

Read the rest of this article...
Posted by David Beard MA, FSA, FSA Scot at 8:42 AM No comments:

One fragment of the non-stick frying pans with internal red-slip coating.

Italian archaeologists have found a site near Naples where the precursors of non-stick pans were produced more than 2,000 years ago.

The finding confirms that non-stick frying pans, an essential tool in any modern kitchen, were used in the Roman Empire.

The cookware was known as “Cumanae testae” or “Cumanae patellae,” (pans from the city of Cumae) and was mentioned in the first-century Roman cookbook De Re Coquinaria as the most suitable pans for making chicken stews.

Read the rest of this article...
Posted by David Beard MA, FSA, FSA Scot at 6:55 PM No comments: