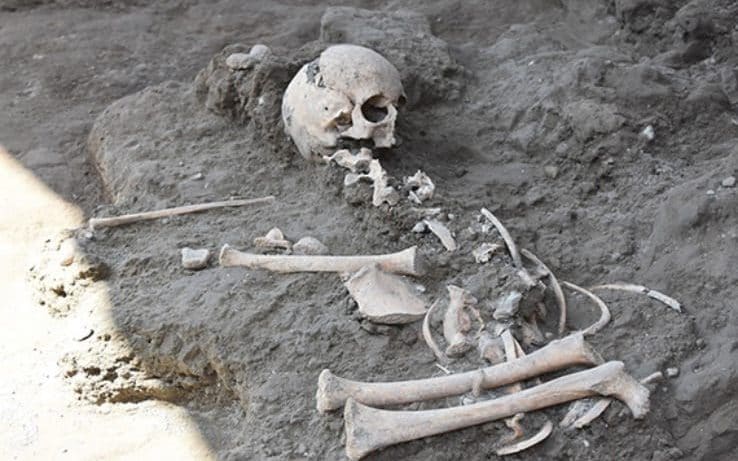 The skeleton of the child, thought to be aged seven or eight, found at Pompeii

Archeologists in Pompeii have discovered the skeleton of a child who tried in vain to hide from the cataclysmic eruption of Mt Vesuvius nearly 2,000 years ago.

It is the first time in about 50 years that a child’s skeleton has been found in the remains of the ancient Roman city, which lies just south of Naples and was destroyed in AD79.

The child, believed to be seven or eight years old, apparently took refuge in a public baths complex after the volcano erupted and started spewing ash and pumice into the air.

But the building could not save the terrified youngster from the effects of the eruption, which was witnessed by Pliny the Younger.

It is believed that he or she was not killed by falling debris, but instead suffocated by the clouds of scorching ash that enveloped the city, a thriving port on the Bay of Naples.

Read the rest of this article...
Posted by David Beard MA, FSA, FSA Scot at 6:47 PM No comments:

A woman buried with a sheep is typical of the graves throughout the Roman Iron Age (in the Nordic countries). Other animal species (including sheep) are found in younger periods and demonstrate Roman influence. (Photo: Kroppedal Museum)

Forget about Gucci bags, gold jewellery, and fast cars. In the Nordic Roman Iron Age, the best status symbol was a goose. Alternatively a hen.

That is the conclusion made by Danish scientists after studying almost 100 graves from the Early and Late Roman Iron Age (1-375 CE).

They further posit that the Roman influence led to a significant shift in the way in which Scandinavians buried their dead.

One of the changes was the custom of burying people with different species of animals – and the newly introduced hens and geese were especially high-ranking status symbols.

“We don’t have these kinds of poultry before Christ, so it is clearly associated with the Roman life and Roman status. In the Roman Empire, hens and geese were a common burial gift, while in Denmark they were new and exotic species,” says Anne Birgitte Gotfredsen from the Natural History Museum of Denmark at the University of Copenhagen.

Read the rest of this article...
Posted by David Beard MA, FSA, FSA Scot at 6:45 PM No comments:

Colourful past of Scotland's Roman wall 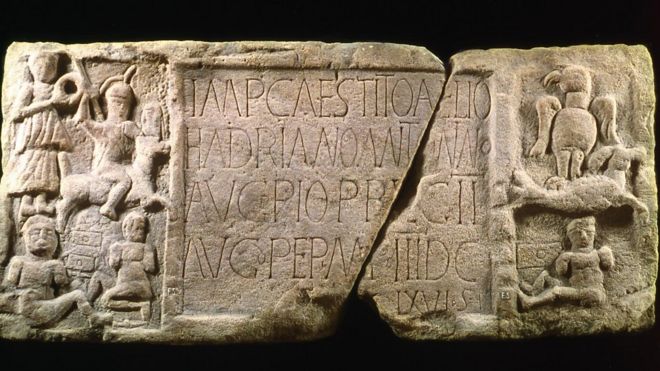 THE HUNTERIAN/ UNIVERSITY OF GLASGOW
The Summerston distance stone from the Antonine Wall, which was found near Bearsden, was one artefact successfully tested for pigment

Parts of the Roman Empire's most north western frontier were likely to have been painted in bright colours, new research has found.

The Antonine Wall was built across central Scotland from Old Kilpatrick in the west to Bridgeness in the east.

Now an expert at Glasgow University has used cutting edge technology to examine the remnants of the structure.

And archaeologist Louisa Campbell has found that "distance stones" were painted vibrant red and yellow.

She said the coloured stones were used by the Romans to demonstrate their power over local people.

"The public are accustomed to seeing these sculptures in bland greys, creams, white (for marble) and don't get the full impact that they would have had on the Roman and indigenous audiences 2,.000 years ago," she added.

Read the rest of this article...
Posted by David Beard MA, FSA, FSA Scot at 7:00 PM No comments: UNIVERSITY OF HELSINKI—A recent study published in an esteemed academic journal indicates that volcanic eruptions in the mid 500s resulted in an unusually gloomy and cold period. A joint research project of the Chronology Laboratory of the Finnish Museum of Natural History and Natural Resources Institute Finland (Luke) suggests that the years 536 and 541-544 CE were very difficult for many people.

An extended period of little light may make it difficult for humans to survive. The level of production of plants is dependent on the amount of available sunlight. Food production, i.e, farming and animal husbandry, rely on the same solar energy. Humans, meanwhile, become more prone to disease if they are not exposed to enough sunlight to produce vitamin D.

“Our research shows that the climate anomaly, which covered all of the northern hemisphere, was the compound result of several volcanic eruptions,” says Markku Oinonen, director of the Chronology Laboratory.

The aerosols that were released into the atmosphere with the eruptions covered the sun for a long time.

Read the rest of this article...
Posted by David Beard MA, FSA, FSA Scot at 3:54 PM No comments: