Carthaginians used war elephants against the Romans in the Battle of Zoma in 202 B.C., as seen in this 1890 painting by Henri-Paul Motte. A new genetic study sheds light on world’s only known battle between Asian and African war elephants in 217 B.C.


If you think back to history class, you might remember the tale of Hannibal’s crossing of the Alps in 218 B.C. to sneak up on Rome during the Punic Wars. It was notable not just because he brought an entire army from Carthage to Rome the long way around, but because that army included elephants.

The use of war elephants dates back at least to the fourth century B.C., when Indian kings took Asian elephants into battle. The practice soon spread west to the Persian Empire and then northern Africa, where African elephants were put to military use. There’s only one known case, though, of an African elephant-Asian elephant matchup, at the Battle of Raphia near Gaza on June 22, 217 B.C. The battle, over the sovereignty of Syria, matched the forces of Ptolemy IV, pharaoh of Egypt, against those ofAntiochus III, a Greek king whose reign stretched into western Asia.

Ptolemy won the battle — but not because his elephants were any help, at least according to Greek historian Polybius, whodescribed the encounter in his work The Histories:

Read the rest of this article...
Posted by David Beard MA, FSA, FSA Scot at 11:00 AM No comments:

Infanticide was a fact of life in ancient Rome. In the city's foundation story, two abandoned babies, Romulus and Remus, were nursed by a wolf, as depicted in this sculpture from the Basilica of Aquileia.


A new look at a cache of baby bones discovered in Britain is altering assumptions about why ancient Romans committed infanticide.

Infant girls were apparently not killed more often than baby boys, researchers report in an upcoming issue of the Journal of Archaeological Science.

Read the rest of this article...
Posted by David Beard MA, FSA, FSA Scot at 10:57 AM No comments:


A new look at a cache of baby bones discovered in Britain is altering assumptions about why ancient Romans committed infanticide. 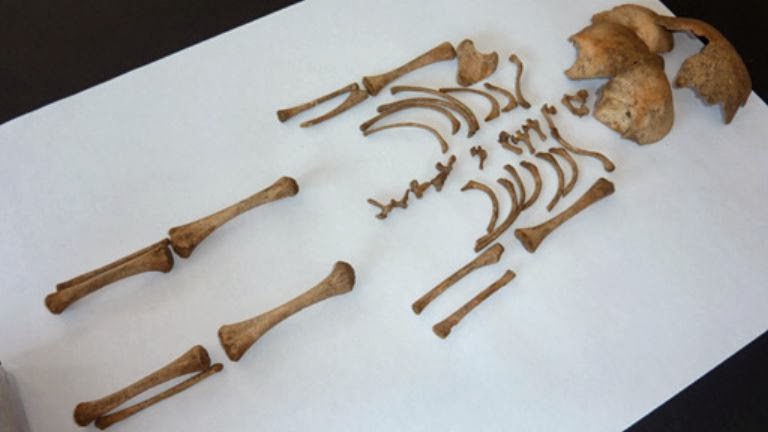 One infant's skeleton found at the Hambleden site. An analysis of remains from 35 infants revealed they were most likely killed at birth [Credit: BBC]

Infant girls were apparently not killed more often than baby boys, researchers report in an upcoming issue of the Journal of Archaeological Science.

Read the rest of this article...
Posted by David Beard MA, FSA, FSA Scot at 10:53 AM No comments:

Site officer James Stanley in one of the trenches


An archaeological dig aims to uncover new information about Ilkley’s ancient Roman fort and the lives of the soldiers who once lived there.
Archaeologists are digging trial trenches on Castle Hill - close to the Manor House Museum and All Saints Parish Church.
The site was opened up for members of the public to visit today and find out more about the explorations unde way.
The investigation has been instructed by property developer, BurleyDevelopments, in consultation with English Heritage and West Yorkshire Archaeological Advisory Service.
Read the rest of this article...
Posted by David Beard MA, FSA, FSA Scot at 4:38 PM No comments: 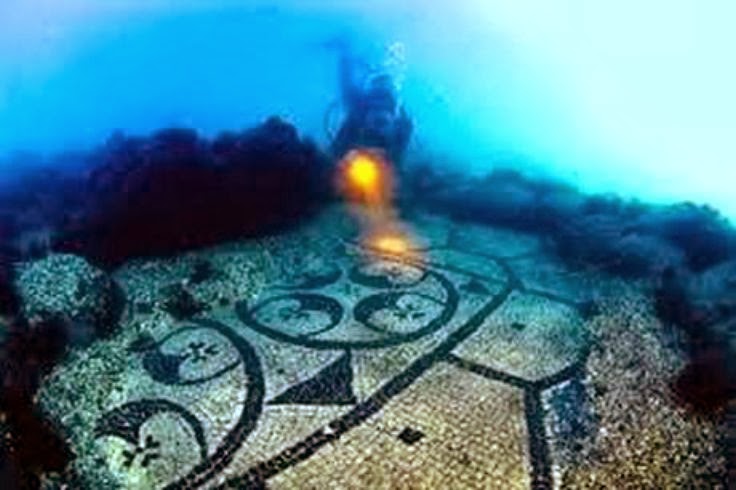 Roman mosaics at the submerged town of Baiae in the Bay of Naples [Credit: ANSA]

Baiae - modern Baia, near Sophia Loren's birthplace Pozzuoli - was a fashionable getaway for several hundred years, especially towards the end of the Roman Republic. Even more popular than Pompeii, Herculaneum, and Capri with the super-rich, it was notorious for the hedonistic temptations on offer, and for rumours of scandal and corruption.

Read the rest of this article...
Posted by David Beard MA, FSA, FSA Scot at 4:16 PM No comments:

Hillary Term begins tomorrow at Oxford, but there is still time to enrol for one of the online courses in archaeology.

Cave paintings, castles and pyramids, Neanderthals, Romans and Vikings - archaeology is about the excitement of discovery, finding out about our ancestors, exploring landscape through time, piecing together puzzles of the past from material remains.

These courses enable you to experience all this through online archaeological resources based on primary evidence from excavations and artefacts and from complex scientific processes and current thinking. Together with guided reading, discussion and activities you can experience how archaeologists work today to increase our knowledge of people and societies from the past.


Italy is demanding the immediate return of a cache of antiquities stored in London and warning that if it does not receive information about the status of the collection within 30 days, it may sue the firm responsible for the objects. 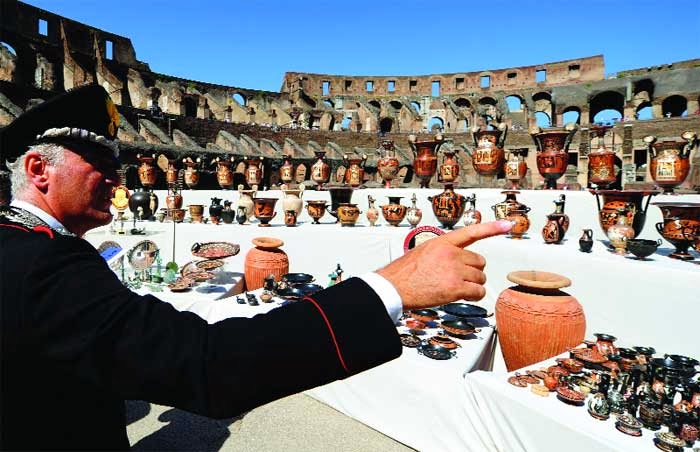 After reclaiming antiquities from the Swiss in 2010 (above), the long arm of the Carabinieri is reaching towards the UK [Credit: The Art Newspaper]

Italy’s state legal counsel was planning to send, this month, a final warning to the liquidator responsible for the assets of the disgraced antiquities dealer Robin Symes, who was declared bankrupt in 2003. Italy’s letter includes a detailed list of around 700 ancient objects, including sculptures and jewellery, that Italy is claiming because it believes they were taken from its territory illegally. 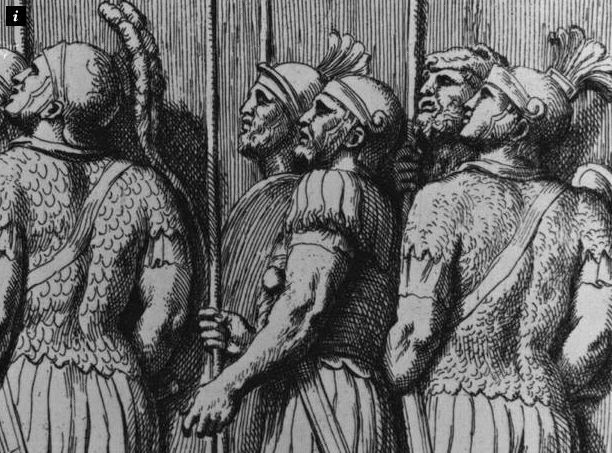 Just over a quarter of a century ago, 39 skulls and a single leg bone were discovered at the London Wall, right in the heart of the City. With state-of-the-art forensic techniques, the mystery of the heads may have been solved – and the blood-thirsty findings have thrilled archaeologists.

The skulls are believed to have been the victims of Roman soldiers’ practice of “headhunting” – removing the body from the head of enemies as trophies – or even gladiatorial combat, the first discovered in the capital.

“This discovery is hugely exciting,” said Rebecca Redfern, from the Centre for Human Bioarchaeology at the Museum of London. “These remains are completely different from everything else we’ve ever found in Roman London. The levels of violence and the types of violence are very different to what we’ve seen.”

Read the rest of this article...
Posted by David Beard MA, FSA, FSA Scot at 4:46 PM No comments:

MANNING THE RAMPARTS: A HILLFORT ON THE EDGE OF EMPIRE

In 2012, a team from Rampart Scotland carried out an archaeological investigation at Sheriffside, a large crop mark site some 20 miles to the east of Edinburgh. Unexpectedly, a ditch measuring over 8m across and up to 2.80m deep was uncovered, which appears to represent the final phase of enclosure of the hillfort. Currently, this is the largest ditch discovered in the region and has produced a C14 date range of AD 211-384.


Archaeologically, this date range and re-cutting of the ditch is extremely interesting, as it falls into a turbulent era in the history of Southern Scotland. After the Romans withdrew behind Hadrian’s Wall in the early 3rd century AD, the Picts carried out frequent raids and may have forced the local tribes such as the Votadini into taking defensive action to protect themselves and their livestock.

A landscape of struggle and societal stress

There is no doubt that weakened military borders were the result of internal politics and competing factions which were beginning to plague the Roman Empire. As a result, people in this largely abandoned region appear to have been living in a landscape of struggle and societal stress for over a century; as Constantius Chlorus’s punitive raids north of theAntonine Wall in AD 305, Theodosius’ reprisals in AD 368-9, Maximus’ conflicts of AD 384 and Stilichos’ Pictish War of AD 400 (Salway 1991, 419) all attest to. A reference to the troubles in Northern Britain in AD 360 by ex-Roman army officer Ammianus Marcellinus paints a grim picture:

Read the rest of this article...
Posted by David Beard MA, FSA, FSA Scot at 2:27 PM No comments:

Using Google Earth software, researchers can track changes in Antioch as the ancient city was absorbed by the Roman Empire.


Google Earth may be a fun way to bring the far reaches of the present-day globe to people's fingertips, but archaeologists are now using the high-tech software to recreate maps of ancient civilizations. The endeavor is opening a window for researchers to the political and geographical changes that have shaped history.

Kristina Neumann, a doctoral candidate in the department of classics at the University of Cincinnati in Ohio, used Google Earth to track trade around the ancient city of Antioch, located in present-day southeastern Turkey, near the Syrian border, at the beginning of its takeover by the Roman Empire in 64 B.C. Neumann found the use of Antioch's civic coins was more widespread than was previously thought, suggesting the city had developed broad political authority within the region before being absorbed into the Roman Empire.

Read the rest of this article...
Posted by David Beard MA, FSA, FSA Scot at 11:40 AM No comments: