The Roman Balneum In Rafina: A Monument Reveals Itself 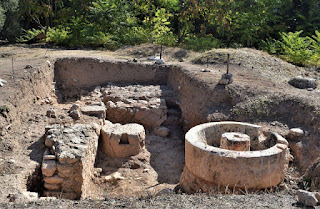 The olive press [Credit: Ephorate of Antiquities of East Attica]
What can the excavation of a Roman bath and its surroundings reveal? If the monument is located near an ancient municipality about which we know very little, such as the municipality of Arafinos (i.e. Rafina), it can bring to light valuable information possibly related to it. And if it is linked to other important findings, such as an inscribed olive press basin ‒ unique in its inscription ‒ it can provide information that may perhaps change views and beliefs about the rural life of late antiquity. The Athens and Macedonia News Agency (AMNA) visited the archaeological site of the Roman Balneum in Rafina ‒ where since 2013 a systematic excavation is being conducted with the cooperation of the Department of History and Archaeology of the National and Kapodistrian University of Athens and the Ephorate of Antiquities of Eastern Attica ‒ and talked to the site’s excavators.
Read the rest of this article...
Posted by David Beard MA, FSA, FSA Scot at 5:49 PM No comments:

The Council of British Archaeology’s Festival of Archaeology runs from 24 October to 1 November.  The situation with the Corona Virus means that many of the events will be digital, although there will be a number of live events. Please use the search facility on their webpage to see the various events that are offered.

You can find their website here…
Please note that EMAS archaeological Society has offered a quiz on little known archaeological sites in South East England.
You can find a link to the quiz on the EMAS home page here…
Test your knowledge and see how much you know about the archaeology of the area!
Posted by David Beard MA, FSA, FSA Scot at 4:43 PM No comments:

The spacious changing room, or apodyterium, of the main mineral water public baths of the ancient spa resort of Diocletianopolis in Bulgaria’s Hisarya was more than 100 square meters in size.
Photo: Video grab from Nova TV
A sizable “changing room" or “undressing room", apodyterium in Latin, has been discovered by archaeologists in the main thermae (public baths) of the major Ancient Roman city and ancient spa resort of Diocletianopolis in Bulgaria’s Hisarya.
The main or central Roman thermae of Diocletianopolis in Bulgaria’s Hisarya, the modern-day town which is still a famous spa resort thanks to the healing qualities of its mineral waters, are said to be among the top three best preserved Ancient Roman public baths, together with thermae in Algeria and the UK.
Originally an Ancient Thracian settlement and then a Roman town called Augusta, the Antiquity predecessor of Bulgaria’s Hisarya was granted the status of a city in the Roman Empire in 293 AD under Emperor Diocletian (r. 284-305 AD) who renamed it after himself, Diocletianopolis.
Read the rest of this article...
Posted by David Beard MA, FSA, FSA Scot at 5:51 PM No comments: