New Roman fort uncovered in Lancashire after years of speculation

A Roman fort lies underneath land off Flax Lane, Burscough

A 1st Century fort uncovered at a Burscough farm could be the key to understanding Roman activity in Lancashire.

After years of speculation about the presence of such a fort, ruins off Flax Lane have finally received recognition from Historic England.

The ruins comprise a 30,000 sq m fort, roads, and a smaller fortlet and experts believe the find will unlock unknown details of how the Romans settled and travelled around the area. Considered alongside other forts in the region, including those at Wigan and Ribchester, Burscough’s will provide great insight into Roman military strategy. It is believed that the area was occupied multiple times over the course of hundreds of years, a theory which is backed up by the variety of pottery found at the site.

Historic England says the lines of the fort’s defences are clearly identifiable on geophysical survey and aerial photos, but the north-west and south-west corners are also visible as slight earthworks on Lidar, which uses laser light reflections to produce 3D images.

Read the rest of this article...
Posted by David Beard MA, FSA, FSA Scot at 4:34 PM No comments:

The Romans Called it ‘Alexandrian Glass.’ Where Was It Really From? 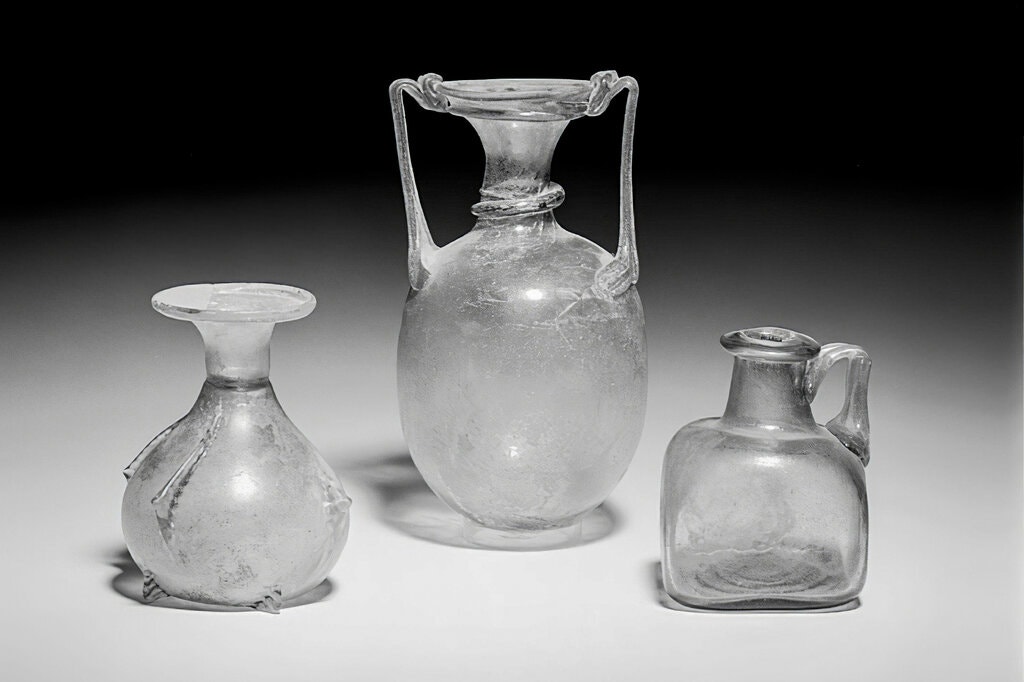 Glass receptacles recovered from Egypt dating to the first or second century A.D., during the Roman occupation.  Credit...Artokoloro, via Alamy

Trace quantities of isotopes hint at the true origin of a kind of glass that was highly prized in the Roman Empire.

Glass was highly valued across the Roman Empire, particularly a colorless, transparent version that resembled rock crystal. But the source of this coveted material — known as Alexandrian glass — has long remained a mystery. Now, by studying trace quantities of the element hafnium within the glass, researchers have shown that this prized commodity really did originate in ancient Egypt.

It was during the time of the Roman Empire that drinks and food were served in glass vessels for the first time on a large scale, said Patrick Degryse, an archaeometrist at KU Leuven in Belgium, who was not involved in the new study. “It was on every table,” he said. Glass was also used in windows and mosaics.

All that glass had to come from somewhere. Between the first and ninth centuries A.D., Roman glassmakers in coastal regions of Egypt and the Levant filled furnaces with sand. The enormous slabs of glass they created tipped the scales at up to nearly 20 tons. That glass was then broken up and distributed to glass workshops, where it was remelted and shaped into final products.

Read the rest of this article...
Posted by David Beard MA, FSA, FSA Scot at 4:21 PM No comments:

Archaeological dig on the A1 in North Yorkshire uncovers Roman remains

Archaeologists at work near Scotch Corner

Archaeologists excavating the A1 before the road's major upgrade have discovered fascinating evidence of Roman engineering and repair work.

The dig between Leeming Bar and Barton, near Scotch Corner, revealed that the Romans settled in North Yorkshire at least a decade earlier than previously thought. They produced coins for circulation and built relationships with the local tribes.

The modern A1 partly follows the route of Roman roads between York and Hadrian's Wall that were used mainly for the movements of legions based at the York garrison who were deployed to subdue the border regions.

Highways England, who oversaw the archaeological work ahead of the upgrade of the A1(M), believe the finds in the vicinity of Scotch Corner are among the best discoveries of the past decade, and a book about the excavations has now been published.

Read the rest of this article...
Posted by David Beard MA, FSA, FSA Scot at 4:19 PM No comments: