An extensive Roman building has been unearthed during archaeological excavations in via Virgilio in the town of Merano located in the province of Bolzano in Trentino- Alto Adige region, Northern Italy.

The finds, including finely decorated fibulae (pins for clothing), which are now being analyzed, clearly show that the Roman house "was inhabited by a rich family”, says to Catrin Marzoli, director of the local provincial Superintendence of Archaeology, Fine Arts and Landscape.

“A hoard of coins was buried in the ground and hidden under a millstone of the kitchen of the house – a treasure which was buried and never recovered", explains Catrin Marzoli.

"In total 3187 coins dating from the late third/early fourth century AD were recovered. The coins are in fact from the period of the Tetrarchy, when Emperor Diocletian, to stem the crisis of the Roman Empire, divided it into two parts - a western and an eastern - ruled by two senior emperors with the title of Augustus and two younger emperors with the title of Caesar. On the coins we found at Maia Alta in Merano, Maximianus Augustus, Constantius Clorus Caesar, Diocletianus Augustus and Galerius Caesar are immortalized."

Read the rest of this article...
Posted by David Beard MA, FSA, FSA Scot at 7:23 PM No comments:

Exhibition reveals hidden history of Colosseum after the fall of Rome, from medieval fortresses to slaughterhouses An artist's impression of the timber walkway used by soldiers guarding the medieval fortress that was built into the side of the Colosseum CREDIT: COLOSSEUM EXHIBITION


Archaeologists in Rome have discovered the remains of a timber walkway used by soldiers guarding a fortress built into the remains of the Colosseum during the Middle Ages.
Gladiatorial contests and other spectacles held in the massive amphitheatre ground to a halt by the sixth century AD with the collapse of the Roman Empire and the arena was gradually appropriated for other uses in succeeding centuries.
By the 12th century a powerful baronial family, the Frangipane, had commandeered the Colosseum and built a formidable fortress into its southern flank. The walkway was built on the top tier of the amphitheatre, enabling the clan’s soldiers to watch out for enemy forces.  The Frangipane were at war with another family of Roman nobles, the Annibaldi.
Read the rest of this article...
Posted by David Beard MA, FSA, FSA Scot at 4:26 PM No comments:

Archaeologists excavating the ancient city of Munigua in southern Spain have found a vast Roman copper mining operation built on an older mine dating back thousands of years.

Exploitation of ore at Munigua apparently began by the Turdetani, the original inhabitants of the region, over  4,000 years ago. Now the excavators have discovered an elaborate system of ventilated underground galleries connected by tunnels dating to the Roman era.

They also found shafts connecting at various heights forming floors that let the miners extract metal deeper than had been believed possible at the time. Happily for the miners, the ancient Romans were on to the secret of ventilation.

Read the rest of this article...
Posted by David Beard MA, FSA, FSA Scot at 4:06 PM No comments: 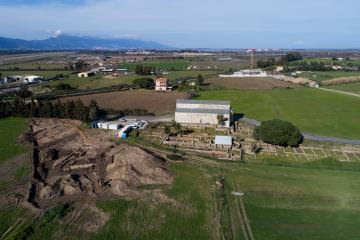 Read the rest of this article...
Posted by David Beard MA, FSA, FSA Scot at 4:03 PM No comments: