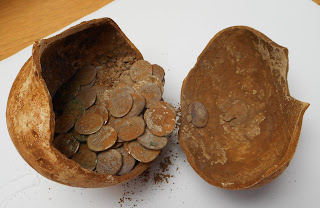 Coins from Year of the Four Emperors and pot found in Warwickshire
[Credit: Warwickshire County Council]

The hoard made up of 440 silver denarii coins was uncovered during an archaeological dig at a Roman site on the Edge Hill in 2015. They were buried in a ceramic pot over 1900 years ago, under the floor of a building. This is the second hoard of denarii to be found in this area and this new discovery contains 78 coins dating to AD 68-69, a turbulent time in Roman history known as the ‘Year of the Four Emperors’.

This important period in Roman history saw a civil war sparked by the death of Nero in AD 68, resulting in four successive rulers in a short span of time: Galba, Otho, Vitellius and finally Vespasian. As they vied for power, each contender struck their own coins to fund their armies, and these coins are incredibly rare. Within a roughly 18 month period the title of Emperor changed hands four times. Very few of these coins from this turbulent time survive. The second South Warwickshire hoard contains the largest collection of civil war-era coins ever found.

Read the rest of this article...
Posted by David Beard MA, FSA, FSA Scot at 8:33 AM No comments:

(ANSA) - Rome, February 14 - A stunning fresco depicting Narcissus gazing at his own reflection has been uncovered during new excavations at Pompeii, the interim director of the archaeological site, Alfonsina Russo, announced on Thursday.
Pompeii Superintendent Massimo Osanna said the myth of Narcissus was a "very commonly found artistic topos in the ancient city".
He said "the whole ambience is pervaded by the theme of 'joie de vivre', beauty and vanity, underscored also by the figures of maenads and satyrs who, in a sort of Dionysian courtship dance, accompanied the visitors inside the public part of the ancient house.
"It is a deliberately luxurious, and probably dating back to the last years of the colony, as is testified by the extraordinary state of conservation of the colours".

Read the rest of this article...
Posted by David Beard MA, FSA, FSA Scot at 9:42 AM No comments: 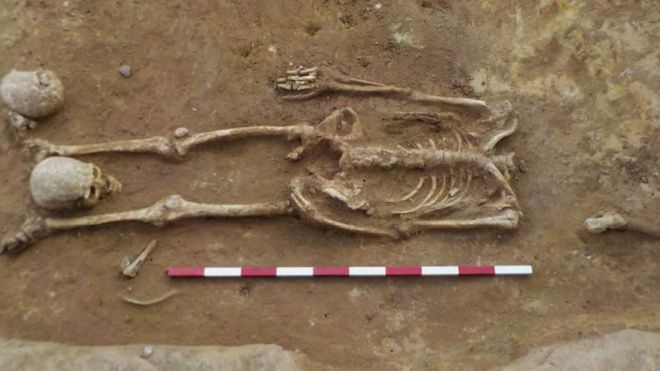 Archaeologists excavating a Roman burial ground said the discovery of a series of decapitated bodies was a "rare find".

A dig has been taking place on a site in Great Whelnetham, Suffolk, ahead of a planned housing development.

Of the 52 skeletons found, about 40% had their skulls detached from their bodies, many placed by their legs.

Read the rest of this article...
Posted by David Beard MA, FSA, FSA Scot at 9:29 AM No comments: