SEARCH CONTINUES FOR ROMAN FORT OF THE NORTHERN FRONTIER

Archaeologists will next week begin the search for an elusive Roman fort believed to be located somewhere in the northeast of Scotland.


Dr Birgitta Hoffmann, Co-Director of The Roman Gask Project, based at the University of Liverpool, will lead a team of experienced volunteers in their search for a Roman fort which is believed to exist, but has been ‘missing’ for almost 2,000 years. It’s not certain that a fort actually exists, but if it does, it is likely to lie somewhere between the last known (and most northerly) fort at Stracathro (Brechin) and the northeast coast.

Locating the fort would be the first such discovery beyond the Antonine Wall in 30 years, and would form another piece of the Gask frontier. The Gask Ridge system was constructed sometime between 70 and 80 CE long before either Hadrian’s Wall (122-130 CE), and the Antonine Wall (142-144 CE). Although the Gask Ridge was not an unbroken defensive wall, it may be Rome’s earliest fortified land frontier based on forts and watchtowers along a military road. Blocking the glens with garrisoned forts disrupted the Caledonian tribes ability to raid the fertile lowlands and effectively created a border between Roman occupied lands and the north and west.
This Roman land frontier stretches from just north of Stirling up to Stracathro. The frontier comprises of a series of Roman forts and watchtowers, with a legionary fortress near Blairgowrie.
Read the rest of this article...
Posted by David Beard MA, FSA, FSA Scot at 10:19 AM No comments:

Archaeologists under the direction of Stephen Rowland and John Zant of the archaeological research institution, Oxford Archaeology North, U.K, will be excavating and investigating the remains of a large Roman settlement associated with the nearby Roman fort of Alauna near the northwestern U.K. coastal town of Maryport.


While much has already been excavated of the nearby fort (where another key excavation, known as the Roman Temples Project, is currently taking place), much less is known of this settlement site, located just northeast of the fort remains. Geophysical surveys have revealed detailed physical clues, including the tell-tale lines of buildings which archaeologists suggest may possibly have been houses and shops adjacent to both sides of what appears to have been the main street extending from the northeast gate of the fort. Thought to be an ancient civilian settlement, it is considered the largest currently known along the Hadrian's Wall frontier.
Report the archaeologists, "The excavation should provide an excellent opportunity to examine the date, complexity and uses of these structures, as well as revealing aspects of the daily lives of the people who lived there".
Read the rest of this article...
Posted by David Beard MA, FSA, FSA Scot at 10:17 AM No comments: 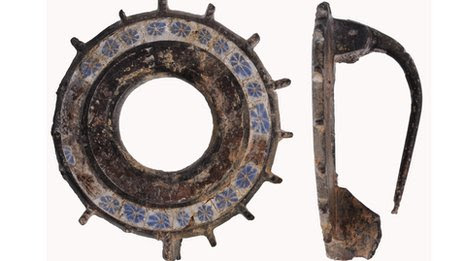 An archaeological mystery that has eluded experts in Kent for 140 years has finally been solved following the rediscovery of the site of a Roman villa.
The remains of a bath house were first unearthed in hop gardens on the banks of the River Medway at Teston in 1872, but after some excavations it was covered over until 1972, when archaeologists reinvestigated the site but failed to locate any trace of ancient remains.
Nearly 20 years later, in 1991 during the emergency renewal of a sewer, Southern Water uncovered Roman building materials and pottery, with archaeologists subsequently revealing the remains of a Roman masonry building.
Read the rest of this article...
Posted by David Beard MA, FSA, FSA Scot at 10:14 AM No comments:

A Roman townhouse is probably located underneath Lincoln Castle, according to archaeologists digging at the site.
The team have already reached the foundations of the Norman phase of the castle during their work. Archaeologist Cecily Spall said the dig had reached a depth of 3.5m with another half-metre of digging left to complete.The area is being excavated prior to a revamp of the castle. "We have been working since September - and have reached the level of the Norman castle - from the mid 11th Century," Ms Spall said.She said they had found evidence of timber-framed buildings which may have been part of a medieval stable block. "We expect we will find a Roman townhouse at about 4m depth below ground level," she added.

Read the rest of this article...
Posted by David Beard MA, FSA, FSA Scot at 10:12 AM No comments:

Located near the small coastal town of Maryport in northwestern England, remains of the ancient Roman fort of Alauna were first uncovered by amateur archaeologist Joseph Robinson in the late 19th century. Among the finds were an assemblage of no less that 22 stone altars, some bearing inscriptions, that tell a story of successive Roman commanders who commanded this, one of Imperial Rome's northernmost outposts during the height of the Roman Empire's expanse. The altars now grace the nearby Senhouse Museum, which serves as a popular tourist attraction.


Now a team of archaeologists and volunteers have returned to the site where the original stone altars were found to uncover more clues about the layout of the fort and its associated settlement, and about the lives of the military officers and soldiers who manned this remote garrison. Led by Newcastle University's Professor Ian Haynes and site director Tony Wilmott, the archaeologists have been here before.
Says Haynes: "The last two years' excavations focused on the area in which the altars were discovered in 1870.   This year sees some further work at the 1870 site and the start of a three year project focusing on the place where, in 1880, local bank manager and amateur archaeologist Joseph Robinson uncovered further altars and two possible temples.   Photographs and other documents from the 1880s indicate that the antiquarian investigation only unearthed part of the site and it is clear that much remains to be discovered."

Read the rest of this article...
Posted by David Beard MA, FSA, FSA Scot at 9:15 AM No comments: 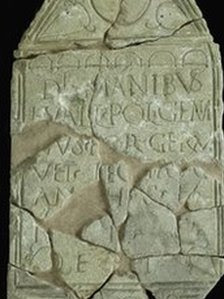 
It is known that in a long lost town in the Oxfordshire of AD 79 an Italian immigrant died.
The discovery of the tombstone of Lucius Valerius Geminus - a veteran of the Second Augustan Legion - has revealed to archaeologists the first known biography of any person to have lived in the county.
It was discovered in fragments in a field, once the bustling Iron Age town of Alchester, near modern day Bicester. It has been reassembled so it can go on public display.
Dr Chris Ferguson, curator of archaeology at Oxfordshire Museum Service, said: "His biography is probably the earliest for a veteran in the entire province of Britannia, and he is certainly the earliest for this region of Roman Britain."
Read the rest of this article...
Posted by David Beard MA, FSA, FSA Scot at 9:09 AM No comments:

Good thermal springs are always likely to draw increasing numbers of people who have the means to tap their benefits. More often than not, they become popular resort destinations for the rich and famous. So it was with this location in the outskirts of the Sredna Gora mountain range near the present-day town of Hisarya of central southern Bulgaria.

Archaeological research indicates that this place was inhabited as long ago as 6,000 years BCE, then later by the Thracians. In the 1st century CE it was conquered by the Roman Empire, eventually becoming an affluent 4th century Roman resort, a place that emperor Septimius Severus himself, among others, was recorded to have visited. Today, the archaeological remains bear the unmistakable evidence of palaces, wide stone streets, marble baths, an amphitheater in circus style, and monumental fortification walls. The walls have been preserved in some places up to 14 m in height.
Now, a team of archaeologists and students have returned to the ancient site to uncover more of the remains, hoping to shed additional light on a major Roman settlement that was likely a popular attraction for the wealthy Roman citizenry during the height of the Roma Empire in Late Antiquity.
Read the rest of this article...
Posted by David Beard MA, FSA, FSA Scot at 5:12 PM No comments:


Archaeologists hope that Maryport will reveal more of its Roman secrets this summer. The third year of excavations at Camp Farm began this week, led by Newcastle University’s Professor Ian Haynes and site director Tony Wilmott.
The Temples Project is the start of a new phase in the five year excavation which will take the team back to an 1880 excavation where amateur archaeologist Joe Robinson discovered altars and two possible temples.Professor Haynes said: “Photographs and other documents from the 1880s indicate that the antiquarian investigation only unearthed part of the site and much remains to be discovered.”The excavation, funded by the Senhouse Roman Museum Trust, will continue until summer 2015.Rachel Newman of the Senhouse Museum Trust said: “Any finds will be included in the museum’s collections.”

The Secrets of Roman Concrete 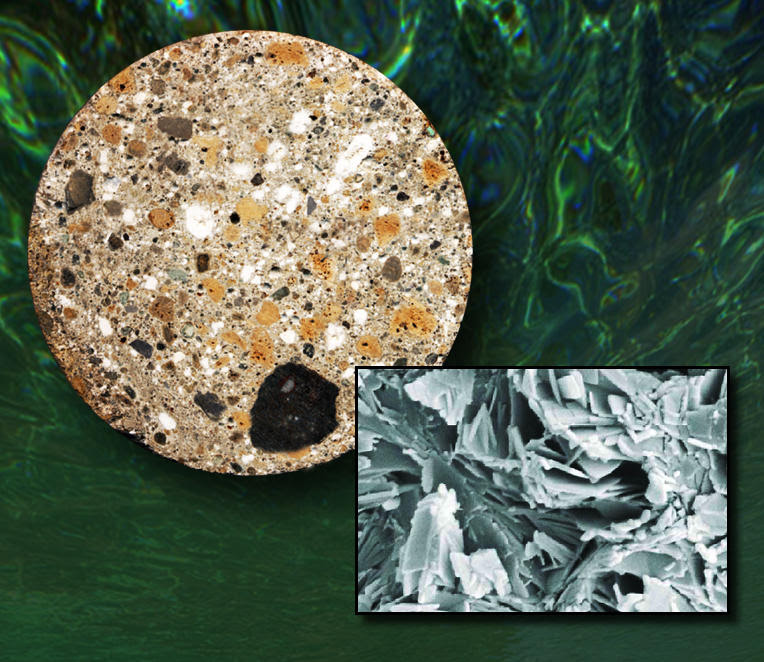 An international team of researchers has examined Roman concrete to learn why it has proven to be so durable. A sample of Roman concrete taken from the ancient port of Baiae in Pozzuloi Bay revealed that by mixing lime and volcanic ash for underwater structures, the Romans used the seawater to trigger a chemical reaction that hydrated the lime and mixed with the ash to form a glue that is stronger than what holds modern concrete together. Plus, the ingredients of Roman concrete can be formed at lower temperatures, using less fuel and releasing less carbon into the atmosphere.

Read the rest of this article...
Posted by David Beard MA, FSA, FSA Scot at 4:04 PM No comments: 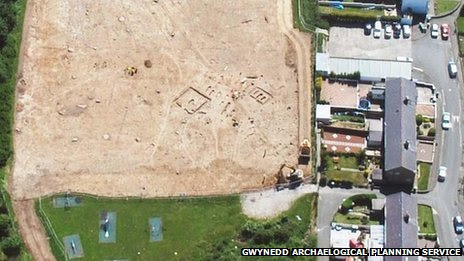 A dig on a piece of land in Gwynedd destined for a new school has resulted in the first discovery in Wales of a Roman construction camp.
The Caernarfon dig was carried out before the new Ysgol yr Hendre school was built, but the results of detailed analysis have only been released.
An early medieval cemetery was also unearthed from a later, lesser known period of Caernarfon's history.
The Romans had a fort called Segontium near Caernarfon from AD77 until AD393.
Read the rest of this article...
Posted by David Beard MA, FSA, FSA Scot at 2:30 PM No comments: