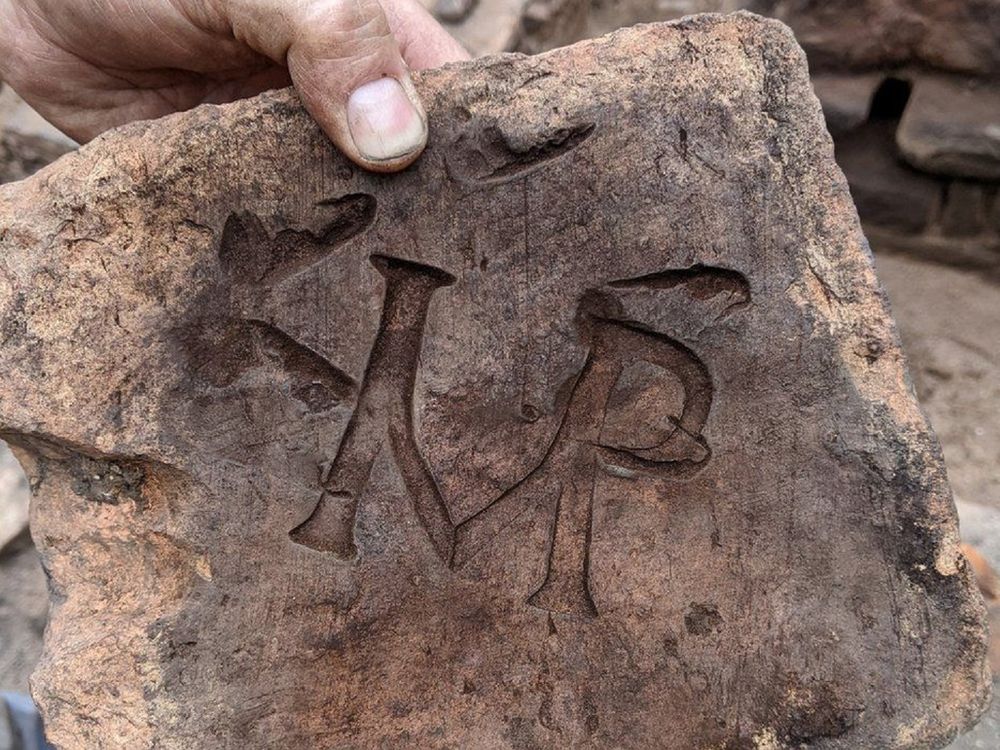 The letters "IMP" stand for imperator, meaning the tile maker was "supplying tiles fit for the emperor" or "on the emperor's demands." Dot Boughton
Excavation of a Roman building on the grounds of a cricket club in the northern English city of Carlisle has yielded tiles with rare imperial stamps linked to Emperor Septimius Severus, reports Ted Peskett for the News & Star.

“The Romans would quite often stamp their tiles,” says archaeologist Frank Giecco, who is leading the dig for British firm Wardell Armstrong. “The legions would stamp tiles, the auxiliaries would stamp tiles; but this is the very top of the pile. This is the imperial court stamping the tile.”

Giecco says similar tiles have previously been found “in random places” across Carlisle. Since researchers discovered the ruined bathhouse in 2017, they’ve uncovered about a dozen of the tiles there, suggesting that the others also originated at the site.

Two amateur free divers have found one of the largest collections of Roman coins in Europe off the east coast of Spain.

Luis Lens and César Gimeno were diving off the island of Portitxol in Xàbia on August 24 when they found eight coins, before further dives by archaeologists returned another 45 coins, according to a press release from the University of Alicante on Tuesday.
Scientists from the university's Institute in Archaeology and Historical Heritage then analyzed the perfectly preserved coins, dating them to between the end of the 4th century and the beginning of the 5th century.
The coins were in such good condition that the inscriptions were legible, allowing the team to identify coins from the reign of a number of Roman emperors.
Read the rest of this article...
Posted by David Beard MA, FSA, FSA Scot at 5:08 PM No comments: 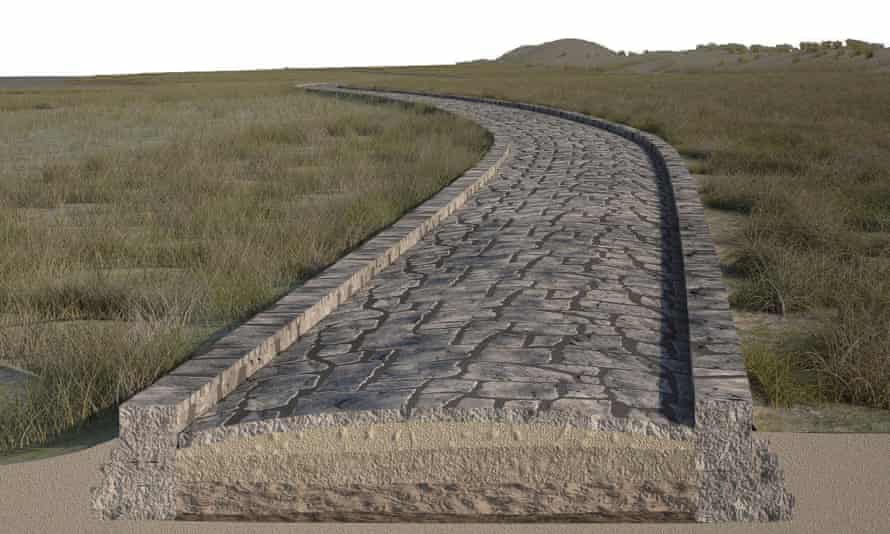 A digital reconstruction of the Roman road submerged in the Venice lagoon, which seems to have been part of a road system in the Veneto region.
Photograph: A Calandriello and G D’Acunto/SWNS
Find could prove there were human settlements in area centuries before city was founded
The discovery of the remains of a Roman road and dock submerged in the Venice lagoon could prove there were permanent human settlements in the area centuries before Venice was founded, researchers say.
Scuba divers discovered what appeared to be paving stones beneath the lagoon in the 1980s, but only after more recent research were the relics confirmed to have formed part of a road system.
“After speaking to those who first found these stones in the 1980s, I understood that it was something significant that could be anthropic,” said Fantina Madricardo, a researcher at the Venice-based Institute of Marine Science (Ismar) whose study was published this week in the Scientific Reports journal.
Read the rest of this article...
Posted by David Beard MA, FSA, FSA Scot at 3:38 PM No comments: 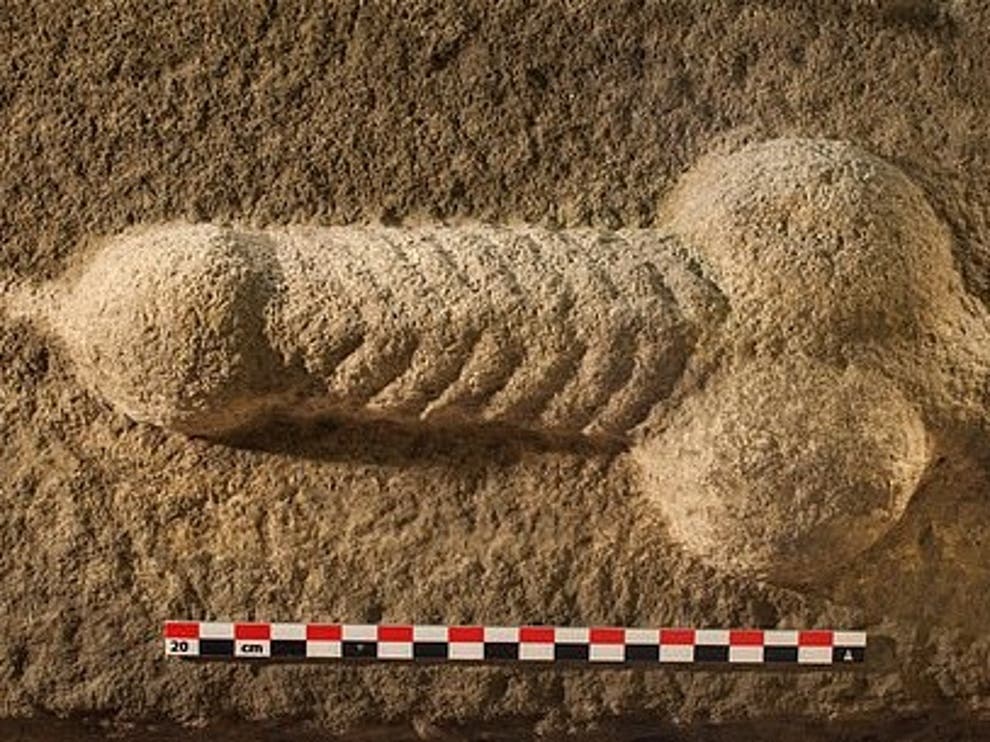 Roman stone-carved penis discovered near Catterick
(Northern Archaeological Associates)
A Roman stone-carved penis is one of thousands of artefacts discovered during half a decade of excavation work around the town of Catterick, it has been revealed.
The 11in phallus – complete with line of ejaculate – is believed to date back to the early years of the ancient empire’s occupation of Britain, which began in the first century AD.
It is among more than 62,000 historical objects unearthed during five years of archaeological digs undertaken as part of work to upgrade the A1 around the North Yorkshire town – which was founded by the Romans.
Other treasures include a 2,000-year-old pistachio nut – the oldest ever found in Britain – as well as pottery, incense burners, brooches and works of art which were probably brought from the Mediterranean.
Read the rest of this article...
Posted by David Beard MA, FSA, FSA Scot at 8:20 AM No comments:

The north-facing orientation of the grave suggests it was a pagan burial.
(L-P Archaeology via Bath & North East Somerset Council)
Archaeologists in the city of Bath in southwest England have discovered an approximately 2,000-year-old Roman sarcophagus containing two bodies. The limestone coffin holds the preserved remains of one person in a prone position, with the partial remains of a second individual laid at their feet, the Bath Echo reports.

The north-facing orientation of the grave suggests it was a pagan burial. Nearby, researchers found a small pot containing food remains, as well as artifacts including small red and blue glass beads, possibly left as votive offerings. These types of donations to the gods were common in ancient Roman religion and represented a gift of thanks or payment, according to the Oxford Classical Dictionary.

“This is an amazing find,” says Sylvia Warman, science advisor for Historic England, in a statement. “Although several Roman stone coffins have been found around Bath in the past, none have been excavated and recorded by professional archaeologists using modern methods until today.”

Jesse Holth of ARTnews reports that the grave was buried beneath the grounds of Sydney Gardens, a Georgian pleasure garden once frequented by Jane Austen. Workers renovating and landscaping the garden for the Bath & North East Somerset Council’s Sydney Gardens Project discovered a Roman wall at the border of Bathwick Cemetery. When a team from L-P Archaeology excavated the site, they found the newly revealed burial. The archaeologists also uncovered cremated remains—the only known example of a cremation burial at the cemetery.


Read the rest of this article...
Posted by David Beard MA, FSA, FSA Scot at 8:34 AM No comments: 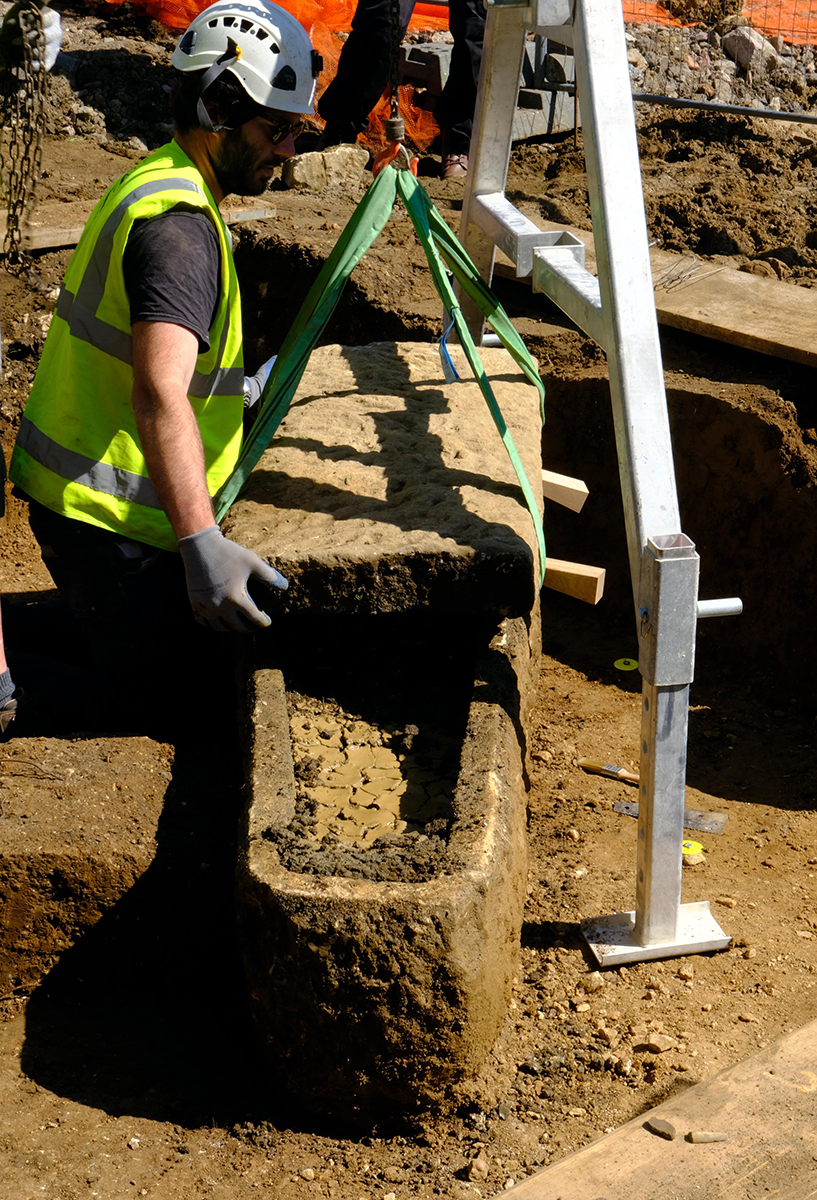 An ancient Roman sarcophagus containing two burials, unearthed at Sydney Gardens, Bath, England, 2021.
Courtesy the Bath & North East Somerset Council
A 2,000-year-old stone coffin with two skeletons inside has been discovered on the grounds of Sydney Gardens in Bath, England. The Bath & North East Somerset Council announced the find on Monday, calling it a “rare glimpse into local burial practices” during the Roman era.
Sydney Gardens, once an 18th century Georgian “pleasure garden,” frequented by famed novelist Jane Austen, had been undergoing renovations and landscaping when a Roman wall was uncovered on the border of Bathwick Cemetery.
As a team from L-P Archaeology began to excavate the site, they discovered the 6½-foot-long coffin. The sarcophagus, made of limestone from the region, held two sets of human remains with one partial skeleton laying at the other’s feet, and faced north, indicating it was likely a pagan burial.
Read the rest of this article...
Posted by David Beard MA, FSA, FSA Scot at 4:41 PM No comments:

Archaeologists have descended on the £85million King's Quarter redevelopment after discoveries were made below the ground.
They're hoping to find ancient Roman artefacts, underneath the ground being developed in to digital hub The Forum.
Last year, remnants of Whitefriars, a 13th century friary founded by the Carmelites, one of the Roman Catholic Church’s four great mendicant (living by charity) orders, was discovered underneath a city centre car park.
Whitefriars was one of several important religious houses in medieval Gloucester along with Llanthony Priory, the Blackfriars and the Greyfriars.
Read the rest of this article...
Posted by David Beard MA, FSA, FSA Scot at 6:13 PM No comments: