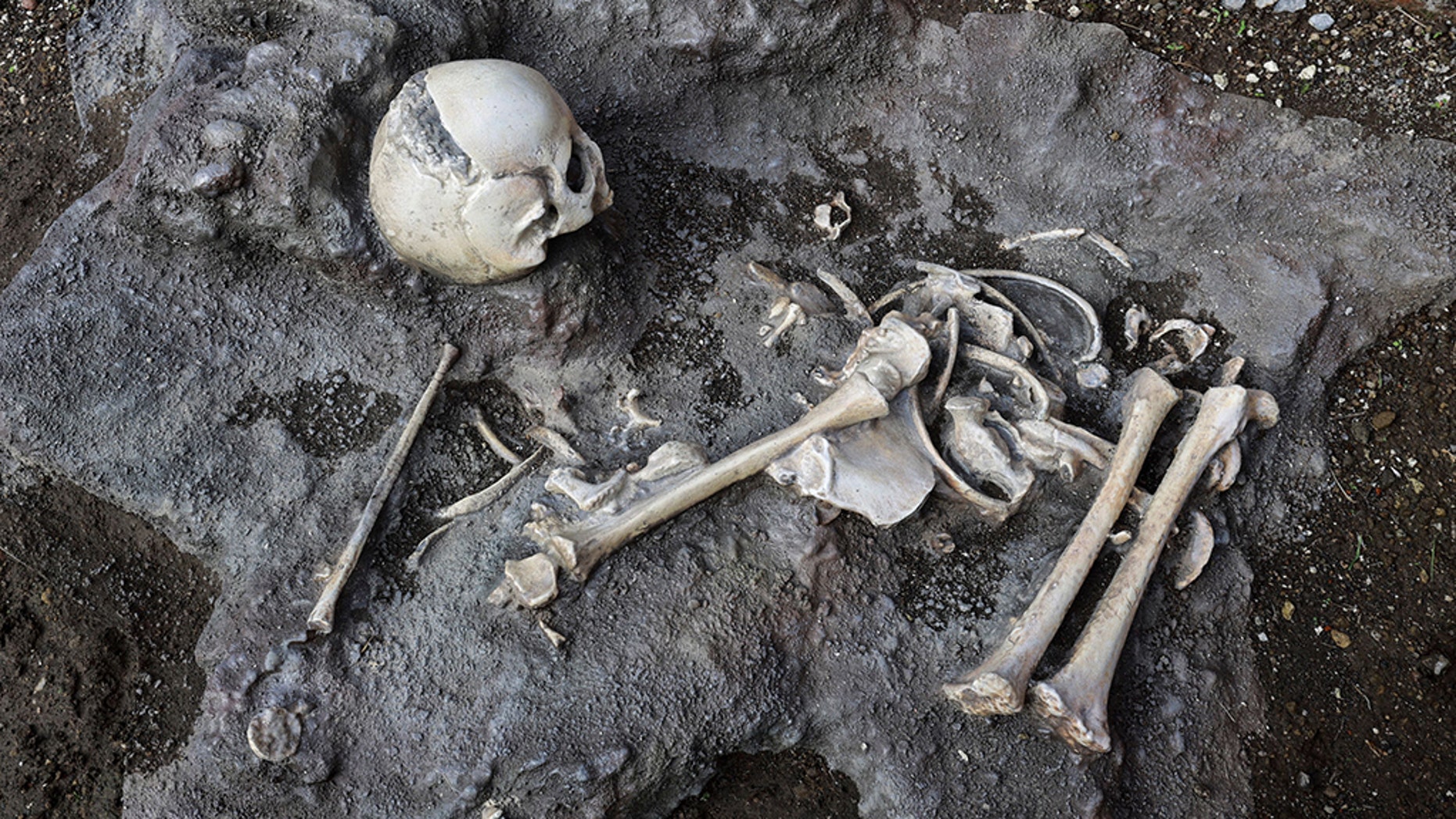 The remains of the child were found amongst the pillars, blocks and tiles which once made up the grand structure.

It's thought that the child was somewhere between eight to ten years old when they died.

Mount Vesuvius, the Italian volcano which is still regarded as dangerous, erupted in 79 AD and destroyed Pompeii with ash and lava.

Although the city's inhabitants were unable to spot the warning signs that the volcano was about to kill them all, they actually lived in a very sophisticated and complex society.

Read the rest of this article...
Posted by David Beard MA, FSA, FSA Scot at 5:33 PM No comments: 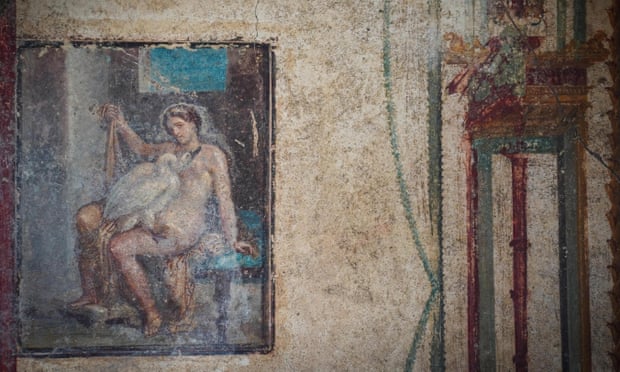 The fresco of Leda and the swan. The image was fairly common in homes in Pompeii and Herculaneum, which were both destroyed when Mount Vesuvius erupted in AD79.
Photograph: Cesare Abbate/EPA

The well-preserved fresco of the figure of Leda being impregnated by the Roman god Jupiter, disguised as a swan, was found last year during excavations of Regio V, an area of the archaeological park that has yielded several surprises.

Via del Vesuvio, the road on which the upper-class townhouse, or domus, containing the fresco is located, is also being reopened. Archaeologists believe the domus belonged to a rich merchant who wanted to reflect his high level of culture by adorning his home with myth-inspired frescoes.

Read the rest of this article...
Posted by David Beard MA, FSA, FSA Scot at 5:41 PM No comments: 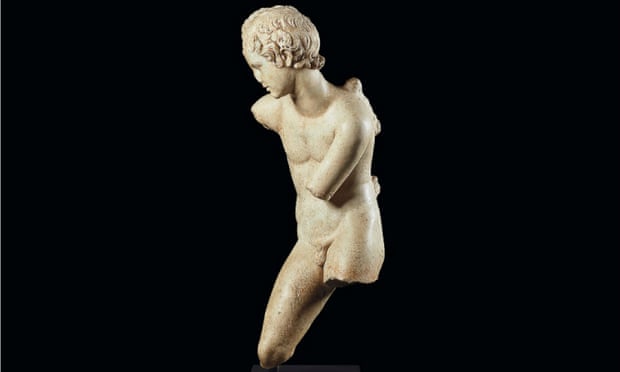 The 94cm Roman marble of Eros is estimated to fetch as much as £800,000 at auction.
Photograph: Christies
A leading archaeologist is calling for Christie’s to cancel the auction of a first-century Roman statue because of its alleged links to “notorious dealers connected with numerous cases of illicit antiquities”.

Prof Christos Tsirogiannis’ claims relate to a marble depiction of Eros unstringing his bow, which is due to be sold on 4 December.

However, Tsirogiannis says he has four photographs of “exactly the same object” in the possession of the disgraced dealer Robin Symes and his late partner Christo Michaelides, whose archives were seized by police and held by authorities in Greece and Italy.

Read the rest of this article...
Posted by David Beard MA, FSA, FSA Scot at 5:36 PM No comments: The city dates back to the Roman Empire (Image: GETTY)

ARCHAEOLOGISTS have solved a Roman Empire mystery which dates back hundreds of years, after discovering a “forgotten city” buried in the Mediterranean.

Neapolis was a major Roman city on the coast of Tunisia, established as a trade port by the Greeks of Cyrene in the fifth century before it became a port when the Roman Empire conquered North Africa. Now, a Tunisian city known as Nabeul stands where the ancient metropolis once was, built on top of most of the remains, making them inaccessible and likely mostly destroyed. However, researcher Mounir Fantar was convinced a large portion of Neapolis was permanently submerged in the ocean when a tsunami hit the city on July 21, 365AD, meaning the Mediterranean could be hiding an underwater city.

Channel 5’s Ancient Mysteries series revealed how the historic city, which is partially submerged in the ocean, remained forgotten for so long

A once forgotten Roman city has been rediscovered by archaeologists in a groundbreaking discovery.

Neapolis was a major Roman city on the coast of Tunisia initially established as a trade port by the Greeks of Cyrene in the 5th century BC before it became a city when the Roman Empire conquered North Africa.

Tunisian town Nabeul now stands where the ancient metropolis once was having been built on top of most of the remains, making them inaccessible and likely destroyed.

Read the rest of this article...
Posted by David Beard MA, FSA, FSA Scot at 10:24 AM No comments:

EMAS Archaeological Study Tour to Orkney
14 – 23 April 2020
Guide: David Beard MA, FSA, FSA Scot
The 2020 EMAS spring study tour will be to Orkney. We will travel by coach from Baker Street, London stopping overnight at Middlesbrough and Inverness and visiting archaeological sites on the way.
We will be based in Kirkwall, and will visit sites on Orkney Mainland and the islands of Egilsay, Rousay and Wyre. The sites that we will visit include Maes Howe, Skara Brae, Midhowe Broch, the Brough of Birsay, Cubbie Roo’s Castle, the Earl’s Palace at Birsay and Kirkwall Cathedral.
The cost of this study tour will be £1036 per person for people sharing a twin room, and £1305 per person for a single room.
Please note that hotel accommodation is limited and applications must be received by  30 November at the latest.
Click here for a complete itinerary
Posted by David Beard MA, FSA, FSA Scot at 6:06 PM No comments: 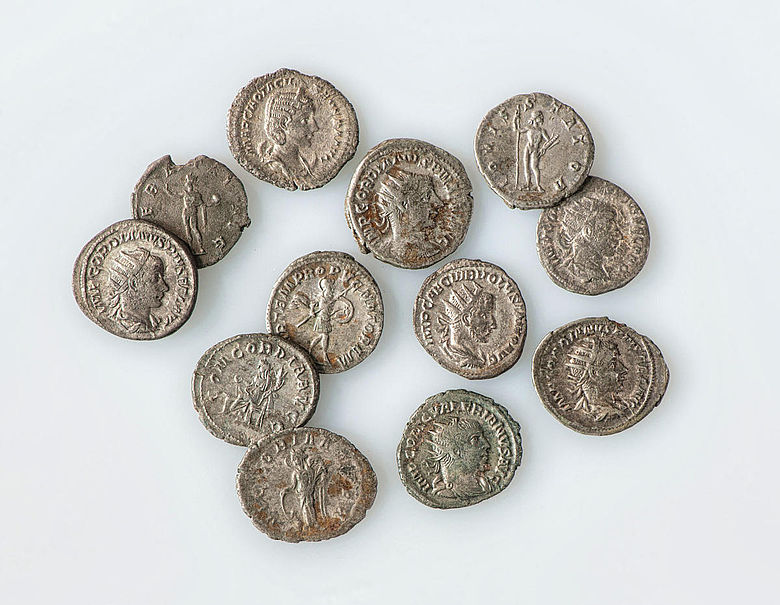 Many imperial Romans had roots in the Middle East, genetic history shows

Many people from the Eastern Mediterranean and Middle East settled in the city of Rome, with its famous Forum, during the imperial period.
ISTOCK.COM/MUSTANG_79

Two thousand years ago, the streets of Rome bustled with people from all over the ancient world. The empire's trade routes stretched from North Africa to Asia, and new immigrants poured in every day, both by choice and by force. Now, an ancient DNA study has shown those far-flung connections were written in the genomes of the Romans.

People from the city's earliest eras and from after the Western empire's decline in the fourth century C.E. genetically resembled other Western Europeans. But during the imperial period most sampled residents had Eastern Mediterranean or Middle Eastern ancestry. At that time, "Rome was like New York City … a concentration of people of different origins joining together," says Guido Barbujani, a population geneticist at the University of Ferrara in Italy who wasn't involved in the study. "This is the kind of cutting-edge work that's starting to fill in the details [of history]," adds Kyle Harper, a Roman historian at the University of Oklahoma in Norman.

Read the rest of this article...
Posted by David Beard MA, FSA, FSA Scot at 9:38 AM No comments: The remains of a horse perfectly in order was found (Image: Daily Star)

The chariot, thought to be around 2,000 years old, was discovered with the near perfect fossilised remains on the horses that would have pulled it. The discovery offered a glimpse into the world of the wealthy from ancient times and the lavish ways in which they buried their belongings.

The discovery was made near the city of Vinkovci in eastern Croatia.

The city was a small part of the mighty Roman Empire which spanned much of Eastern Europe, the Middle East and Western Europe, including England and Wales.

The researchers found a large burial chamber in which the two-wheeled-carriage was unearthed.

The remains of the skeletons of two horses were also found, one strewn across the front of the carriage, the other neatly laid out in the exact position it was laid to rest.

Read the rest of this article...
Posted by David Beard MA, FSA, FSA Scot at 10:08 AM No comments: 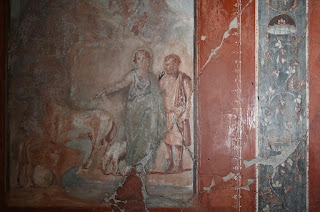 Herculaneum is much better preserved than its neighbour Pompeii
[Credit: Andreas Solaro/AFP]

One of the best preserved Roman houses at Herculaneum reopened on Wednesday after more than 30 years, its exquisite paintings brought back to life thanks to a revolutionary new technique.

Although much smaller than its better known neighbour outside the southern Italian city Naples, Herculaneum was a wealthier town with more exquisite architecture, much of which is still to be uncovered.

Herculaneum was buried under at least 15 metres (almost 50 foot) of rock, much more than the around four metres of ash at Pompeii, which for years made Herculaneum less attractive to looters and archaeologists alike.

Read the rest of this article...
Posted by David Beard MA, FSA, FSA Scot at 10:04 AM No comments:

Can a Restored Pompeii Be Saved From ‘Clambering’ Tourists? 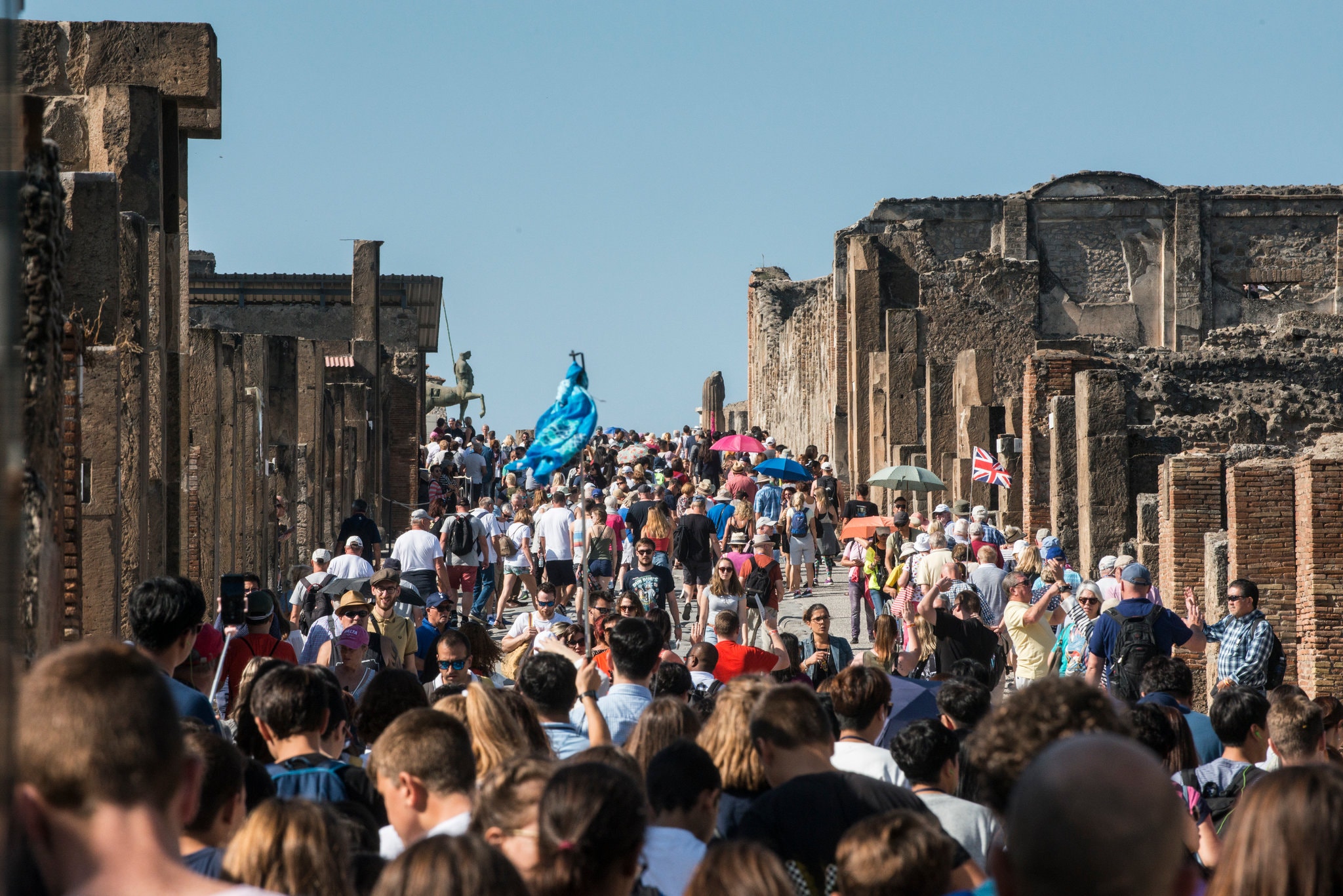 Visitors on Via dell' Abbondanza in Pompeii. The site is set to receive a record-breaking number of visitors this year.Credit...Susan Wright for The New York Times

Not long ago, the ancient Roman site was neglected and crumbling. A multiyear restoration is winding down, but challenges — high costs and troublesome visitor behavior — remain.

It’s easy to imagine lounging in the garden at the sprawling villa of Julia Felix, a savvy Roman business woman who lived in the ancient Roman city of Pompeii in the first century A.D. There would have been wine to drink, and fresh figs, apricots and walnuts to savor. The warm sea breeze would have blended the dry scent of cypress and bay leaves with the stench of rubbish and excrement from the street, and the gurgle of water in the baths would have been occasionally drowned out by cries from the crowd in the 20,000-seat amphitheater nearby.

On a recent weekday morning, a slow-moving line of tourists snaked through the elegant estate, admiring what’s left of the elaborate frescoes, deep-set dining room and marble pillars. Nearly 2,000 years have passed since Pompeii and its surroundings were buried under ash and rock following the eruption of Mount Vesuvius in 79 A.D. But this estate, which recently reopened following extensive restoration, appears much as it would have looked when Julia Felix still welcomed her paying guests.

A "prized" Roman gold ring was found in a farmer's field more than 1,600 years after it was lost.

The piece of jewellery, which is inset with an amethyst, was found in Broxted, near Saffron Walden in Essex, in November 2017.

Sophie Flynn, finds liaison officer for the Portable Antiquities Scheme (PAS) at Colchester Museum, said it would have been a "prized possession".

The ring was declared treasure at an inquest at Essex Coroner's Court.

Read the rest of this article...
Posted by David Beard MA, FSA, FSA Scot at 11:03 AM No comments: 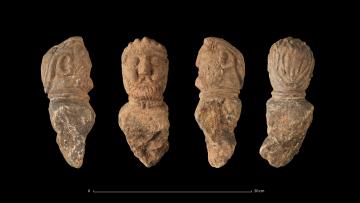 Read the rest of this article...
Posted by David Beard MA, FSA, FSA Scot at 10:52 AM No comments: