View from the top of the Shard...um, if it had been built in 100AD.
Work to improve London Bridge station as part of the Thameslink upgrade is giving archaeologists their first access to this important historical site since the Victorians carved it up with railways around 150 years ago. Substantial Roman remains, as well as foundations and objects from the Saxon and Medieval times,  haverecently been uncovered, reports SE1 website.
Besides the station dig, the area has recently seen extensive mud-shovelling to build The Shard and The Place, as well as reworking bridges and buildings around Borough Market. The turmoil is yielding a steady stream of discoveries on this most ancient part of London, settled by the Romans at the same time as Londonium across the Thames.
Perhaps the biggest find is the remains of one of the earliest buildings known in Southwark. A pit near Joiner Street has yielded 17 timber piles, part of a structure from the first century AD. Little is known about this eastern edge of Southwark in Roman times, and these are exciting times for excavators. Two years ago, aRoman baths was found on Borough High Street.
Read the rest of this article...

Lost Collections of the Ancient World

How Roman Britain and Ur came to Ontario

Welcome to the virtual exhibit for

of the Ancient World

This is the story of a collection of artefacts from Mesopotamia and Roman Britain, which were re-discovered buried deep in the Museum of Ontario Archaeology's collections storage in January 2011.

A lucky set of circumstances led the Museum's education co-ordinator, Katie Urban, and archaeologist, Paige Glenen, both of whom have backgrounds in Greek, Roman and Near Eastern archaeology, to uncover these ancient treasures.

The big question - how did they come to be in Ontario, Canada?

Posted with Blogsy
Posted by David Beard MA, FSA, FSA Scot at 9:38 AM No comments:

Hairdressing Archaeologist Janet Stephens has combined career with personal passion and the result is rewriting history---literally.   A stylist with an intense interest in hair and costume history, most notably the lives of ancient Greeks and Romans, Stephens recreates the hairstyles captured in marble of the imposing Empresses and goddesses of old and in doing so, proved that the intricate braids and time-consuming styling was done not with wigs (as scholars have proposed for years) but on the long-ago lovelies’ own hair.
“One day, I was killing time at the Walters Museum in Baltimore while my daughter was at a music lesson and I ended up in the Ancient Roman collection,” says Stephens. “They were making changes in the gallery and they had set some of the portrait statues in the middle of the gallery and I got to see the back of the head and that is where all the hairdressing happens.  Usually, they are pushed up against a wall because they expect you to be most interested the face but I’m a hairdresser--I don’t care about her face, I want to see the hair.  I looked at the back of these heads and mentally started dissecting the style.”

CRISIS OR CONTINUITY? – ROMAN COIN HOARDS MAY HOLD THE ANSWER

Hoards of valuable materials, particularly coins, are a common and rapidly growing class of discovery across the Roman Empire. While these are usually seen as having been deposited for safe keeping, other explanations for this activity are also possible.

Examining the meaning behind the hoards

A new study has begun by the British Museum and University of Leicester, supported by an Arts and Humanities Research Council grant of £645K for a 3-year project on “Crisis or continuity? The deposition of metalwork in the Roman world: what do coin hoards tell us about Roman Britain in the 3rd century AD?”
There has been little explicit discussion or research on why Roman coin hoards were buried, why hoards were not recovered in antiquity, or what they tell us when studied as a group. Over 660 hoards are known from Britain containing coins of the period AD 253-96, an unprecedented concentration, and they provide a key and under-used dataset that can shed light on a poorly known period of British archaeology and history.
Read the rest of this article...

A Bulgarian team of archaeologists have discovered well-preserved remains of aRoman bath in the ancient Bulgarian town of Sozopol.
The news was revealed by National Museum of History director Bozhidar Dimitrov.
"The team, led by Sozopol Archaeology Museum director Dimitar Nedev has made the discovery as part of its digs in the area in front of Sozopol's fortress walls," said the historian.
According to Dimitrov, the thermae building is 18 meters long and features an intricate water supply systems as well as numerous pools of various sizes.
"Except for Roman baths in Hissarya and Varna, this is the best-preserved Romanbath in Bulgarian lands," added he.
Dimitrov expressed satisfaction at the string of discoveries made in Sozopol, which he said will make an attractive open-air exhibit once archaeological works are completed.

ARCHI, the online searchable archaeological database, has added a new feature that allows users to add sites to their world-wide database.

The online form is easy to use and should prove to be an extremely useful addition to this site.

You can find the online form at:

The Oxford Experience is offering a number of archaeology courses this summer.

Each course lasts for one week and participants stay in the 16th century college of Christ Church.

The courses offered are:

You can find further details here...

There are still a few places available on the Easter archaeological study tour to Yorkshire.

The Study Tour is organized by EMAS, the University of London Extra-Mural Archaeological Society, and is open to any one.

You can find further details here...


The impressive ruins of the Roman city of Carsulae are located a short distance from Terni and from the town of San Gemini, known for its mineral springs. Carsulae grew up along the via Flaminia, which was built in 220-219 B.C. and connected Rome to the Adriatic Sea. The road attracted the settlement of pre-Roman inhabitants from the surrounding hills. The beauty of the site is mentioned by Tacitus and Pliny the Younger. The town was abandoned after a severe earthquake and never reoccupied, so many important structures, including twin temples, an amphitheater, a theater, the Arch of San Damiano, and monumental tombs, as well as the ancient urban plan, remain well preserved.

Segedunum: The 'most excavated' fort on Hadrian's Wall

An exhibition at Segedunum Roman Fort, Baths & Museum takes a look back at the history of the "most excavated" fort on Hadrian's Wall. Excavations at the fort in Wallsend in North Tyneside, began in 1975 ahead of new housing.

British archaeology has enjoyed a surge of interest of late, with the recent unearthing of Richard III in a certain Leicester car park. However, one London archaeological site remains in limbo: the Temple of Mithras is still waiting for its new home, as one of the City’s biggest ever digs continues.
The temple, dating from 240AD, has been dismantled and is currently in storage with the Museum of London. It’s awaiting a permanent home in the rebuilt Bucklersbury House on Queen Victoria Street, which is set to be the European headquarters of media giant Bloomberg LP.
Bloomberg was granted planning permission in 2010 to uproot the temple’s remains and incorporate them into its new corporate base. However, work on the £300m project, designed by Foster + Partners, hasn’t yet begun. The site, occupying a huge city block, is still a big hole in the ground. Museum of London Archaeology (MOLA), which is leading the project to move the temple, says it will be “a matter of years” before it is once again visible to the public.

What would chopped up Traprain Law Roman silver have looked like

The largest hoard of "hacked up" Roman silver ever found was discovered on a hill east of Edinburgh almost 100 years ago.

Now experts have taken a fresh look at two of the small fragments in the treasure and think they were from one of the biggest silver dishes in the whole of the Roman world. Why was valuable and ornate Roman silverware cut into small pieces and what would it have looked like if it had not been?

It is thought the hoard of Roman silver from Traprain Law in East Lothian was buried more than 1,500 years ago, at the beginning of the Early Medieval period - or, as it used to be referred to, the Dark Ages.

Two fragments from the rim of a plate were used in the recreation
This is the period when, after 400 years of occupation, the Roman empire receded from Britain.

A substantial Roman settlement has been uncovered during work on a major building development in Flintshire.
The find at the Croes Atti project near Flint has unearthed a section of Roman road, pottery and evidence of an industrial complex processing lead and silver mined at nearby Halkyn Mountain.
The discoveries were made as groundwork began on an 180-house scheme.
A three-week exploration of the site is now under way, funded by construction firm Anwyl and the heritage body Cadw.
Continue reading the main story

The site is throwing up all manner of interesting things”

Will WalkerEarthworks Archaeology
Andy Davies, Anwyl's technical director, said his workforce had discovered the proof that had eluded archaeologists.

Restoration of Pompeii slated to begin next week 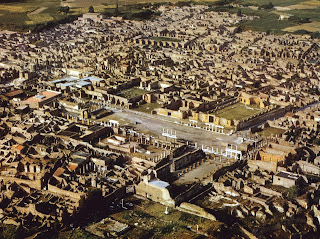 The long-awaited restoration of the Pompeii archaeological site will begin on February 6, the authorities said Wednesday.

An agreement on how to proceed at the UNESCO World Heritage site has been finalized and more details will be coming, said Fabrizio Barca, minister for territorial cohesion.

The so-called the Grande Progetto Pompei or Great Pompeii Project is to secure and improve access to the ruins of Pompeii.

It has financial backing from the European Commission, as well as the Italian government.