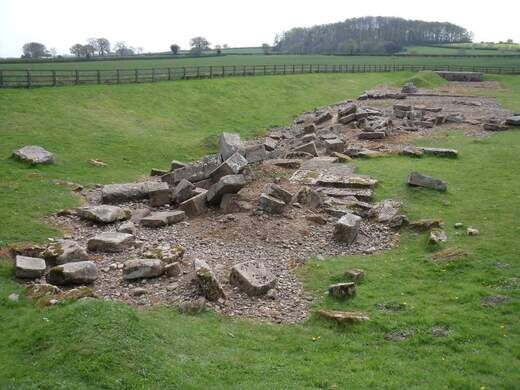 The remains at Piercebridge are where Dere Street, the famous Roman road, crossed the River Tees. This was achieved by passing over a large bridge that allowed the road to link York with Corbridge, near Hadrian’s Wall. The bridge’s remains now reside on the south bank of the river and were discovered in 1972.
The current remains of the bridge appear to be the second reiteration of a Roman bridge constructed at this location. The bridge is only part of a much larger Roman site, which included a fort and various settlements. The ruins of the bridge provided archeologists with valuable evidence on the engineering prowess of the Romans.
Only the lowest parts of the bridge remain, there is however a clearly recognizable abutment at one end of the old bridge. It includes some metal ties that held the stones together.
Read the rest of this article...
Posted by David Beard MA, FSA, FSA Scot at 4:13 PM