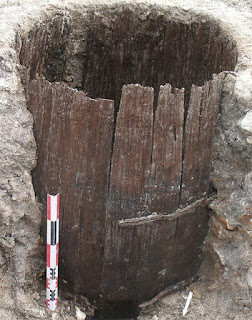 The barrel used as casing for the Pts 378 well in situ
[Credit: Inrap]
The three barrels were discovered in 2008, along the right bank of the river Vesle which runs through Reims, as part of an archaeological excavation.
Dating from the 1st century AD to 4th century AD, the three barrels were in an “outstanding state of preservation” and were being used as water butts at the end of their working lives.
Trace analysis of the barrel staves, however, revealed the tell-tale remains of malic and tartaric acids which are common indicators of alcoholic fermentation.
Read the rest of this article...
Posted by David Beard MA, FSA, FSA Scot at 5:29 PM