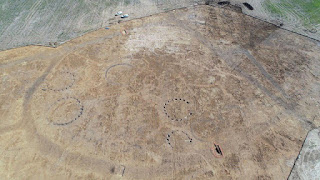 Aerial view of the site showing the roundhouses [Credit: Oxford Archaeology East]
The remains of an Iron Age village have been found at Tye Green. Members of Oxford Archaeology East have been investigating the four hectare area for Countryside Properties and RPS Consulting, ahead of work to create new housing.
Their fieldwork suggests the site was important in the late Iron Age and early Roman periods, but could have come to harm - possibly as a result of Boudiccan reprisals
The site has a large defensive enclosure dug in the late 1st century BC, with 17 roundhouses and 17 semi-circular shapes which could have been screens or windbreaks. Smaller semi-circular structures are also associated with hearths.
The depth of the roundhouse gullies has suggested that the buildings were up to 15m in diameter. Archaeologists said the enclosure had an avenue-like entrance and aligned with the central roundhouse. Structures similar to medieval granary stores could have been stored grain taxes.
Read the rest of this article...
Posted by David Beard MA, FSA, FSA Scot at 5:10 PM