Climate Change In Antiquity: Mass Emigration Due To Water Scarcity 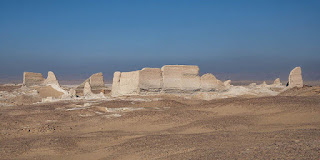 Buried forever by the desert: ruins of Soknopaiou Nesos, a village in the Fayum region
of Egypt that was lost in late antiquity [Credit: Bruno Bazzani/WikiCommons]
The absence of monsoon rains at the source of the Nile was the cause of migrations and the demise of entire settlements in the late Roman province of Egypt. This demographic development has been compared with environmental data for the first time by professor of ancient history, Sabine Huebner of the University of Basel - leading to a discovery of climate change and its consequences.
The oasis-like Faiyum region, roughly 130 km south-west of Cairo, was the breadbasket of the Roman Empire. Yet at the end of the third century CE, numerous formerly thriving settlements there declined and were ultimately abandoned by their inhabitants. Previous excavations and contemporary papyri have shown that problems with field irrigation were the cause. Attempts by local farmers to adapt to the dryness and desertification of the farmland - for example, by changing their agricultural practices - are also documented.
Volcanic eruption and monsoon rains
Basel professor of ancient history Sabine R. Huebner has now shown in the journal Studies in Late Antiquity that changing environmental conditions were behind this development. Existing climate data indicates that the monsoon rains at the headwaters of the Nile in the Ethiopian Highlands suddenly and permanently weakened. The result was lower high-water levels of the river in summer. Evidence supporting this has been found in geological sediment from the Nile Delta, Faiyum and the Ethiopian Highlands, which provides long-term climate data on the monsoons and the water level of the Nile.
Read the rest of this article...
Posted by David Beard MA, FSA, FSA Scot at 5:42 PM