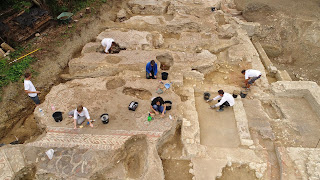 Archaeologists have discovered the ruins of a luxurious 5th-century Roman palace in Auch in the Gers – and they face a race against time to excavate it.

Abandoned some 16 centuries ago, this aristocratic ‘domus’ possessed private baths and splendid mosaics on the ground. It was close to the centre of the ancient Roman city of Augusta Auscorum, which was the capital of the province of Novempopulanie - and near the centre of the modern town of Auch.

Originally found by the landowner digging foundations to build a house, just 50cm below the surface the impressive 2-metre-deep ruins have been revealed. Since the end of April, l’Institut National de Recherches Archéologiques Préventives (Inrap) has been bringing to light a part of what was once a vast aristocratic home.