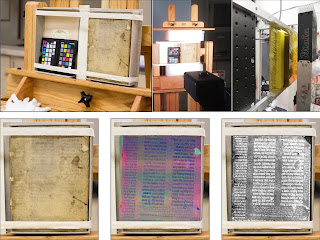 After being hidden for centuries, the secrets within medieval manuscripts might soon come to light. By fusing two imaging techniques — visible hyperspectral imaging and x-ray fluorescence — an interdisciplinary team of Northwestern University researchers has developed a new, non-destructive technology that gives access to medieval texts hidden inside of ancient bookbindings.

Between the 15th and 18th centuries, bookbinders recycled the bindings from medieval parchments into new binding materials for printed books. While scholars have long been aware that books from this time period often contain hidden fragments of earlier manuscripts, they never had the means to read them.

“For generations, scholars have thought this information was inaccessible, so they thought, ‘Why bother?’” said Marc Walton, senior scientist at the Northwestern University-Art Institute of Chicago Center for Scientific Studies (NU-ACCESS). “But now computational imaging and signal processing advances open up a whole new way to read these texts.”