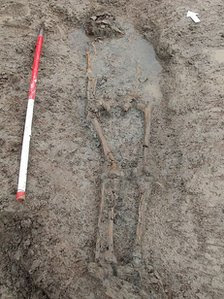 Several Roman human remains were discovered at Banwell in Somerset


A Roman cemetery containing several human burials has been found during work on a new water mains in Somerset.

The finds were made by archaeologists during the laying of a four-mile (7km) long mains between Banwell and Hutton.

Among the skeletons, which have been exhumed for further study, there was one in a partially-preserved coffin.

A Bristol Water spokesman said the excavation had been described as "potentially the most important for 100 years in North Somerset".

The cemetery was discovered "isolated from the surrounding landscape" in a curved water-filled ditch.
Roman cemeteries, according to Neil Shurety from Border Archaeology, are generally sited outside settlements and away from areas of human habitation.