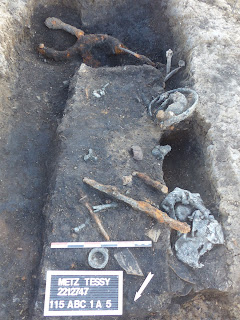 The charred remains of a curule chair have been recovered from a 1st century A.D. funeral pyre in the town of Épagny-Metz-Tessy in southeastern France. Archaeologists discovered the remains of two Roman funeral pyres in a salvage excavation before construction of new residential buildings.
The first pyre is the oldest of the two. It contains the remains of a young child between five and eight years old at time of death. The pyre was furnished with a great abundance of goods, including 17 ceramic vessels, 10 bronze vases and four glass vessels containing the remains of food offerings (lentils, beans, pork, rooster, wine). It was the child’s final banquet, and it was a grand one. Other goods were use items — three copper alloy strigils, bone game tokens — and furnishings (the funeral bed, boxes).
Read the rest of this article...
Posted by David Beard MA, FSA, FSA Scot at 11:43 AM