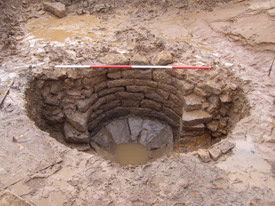 Archaeologists from the University of York say a virtually intact Late Roman well discovered near Heslington, on the outskirts of the city, may have had significance in contemporary local agricultural cycles and fertility practices.
The well, which is thought to have been in use for several decades in the late 4th and early 5th centuries, was unearthed during archaeological excavations on the site of the University's campus expansion at Heslington East.
From at least the Early Bronze Age, a range of methods were used here to access natural springs, including watering holes and primitive wells. In contrast, this Late Roman feature was carefully engineered, positioned high on a hillside and used newly acquired, good-quality masonry.
Read the rest of this article...
Posted by David Beard MA, FSA, FSA Scot at 8:30 AM