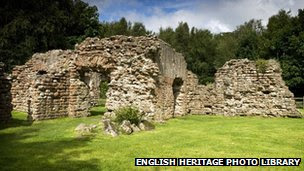 Archaeologists in Cumbria are calling for volunteers to help them explore the remains of a Roman naval base.
Ravenglass Roman fort was occupied from AD 120 through to the 4th Century.
During the dig, due to begin on 4 September, archaeologists hope to find evidence of a civilian settlement from more than 1,800 years ago.
The £125,000 project received funding from the Heritage Lottery Fund, Lake District National Park Authority and Copeland Community Fund.
Holly Beavitt-Pike, Lake District National Park's archaeology and heritage assistant, said the first dig would end on 28 September and participants would be able to volunteer for a maximum of five days.
Read the rest of this article...
Posted by David Beard MA, FSA, FSA Scot at 5:18 PM